Well, I've been meaning to post these boys for a while now...so here they are. They are as yet unfinished, so do please bear with me; but (a) I'm quite pleased with a couple of the tweaks I've made, and (b) the work-in-progress pics actually serve to illustrate some of my earlier posts (see below).
So - here are some of the mismatched crowd that constitute the 'hardened veterans' of the Cadian 24th:

Firstly, their trusty vet sergeant, who sports a jaunty little greenstuff cap, a power sword and a bolter, as well as assorted grenades. Sadly, his photos were a little disappointing (this model actually looks better in reality - unlike the other pics, which are pretty accurate): 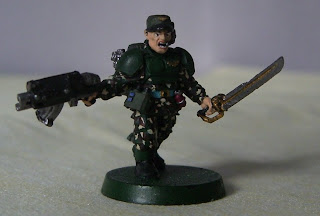 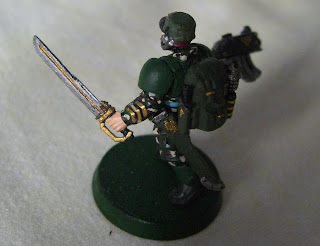 Next - the sniper. Yes, I know vets oughtn't really to have snipers, but I really couldn't resist converting this; especially if you compare it to the old, old one in the A/P hvy wpn squad I posted previously! I love this model - the rifle really seemed to work well without being too chunky, and goes very well with the FW head with eyepiece: 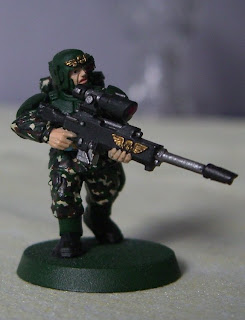 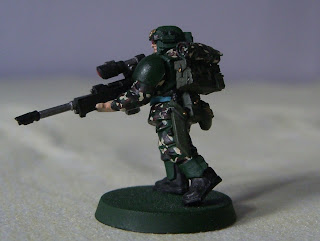 The missile launcher. I love this model, too: it's the normal IG missile launcher but sawn-off, and with the small Space Marine rockets as ammo (on his back, in this case). The purity seal is an early hand-made one, too: 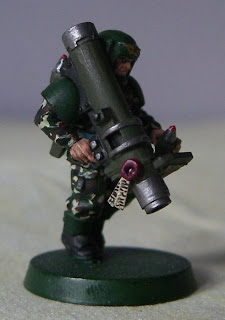 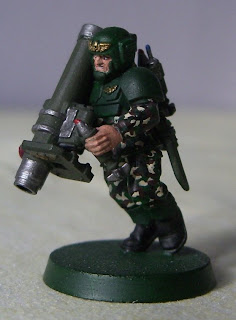 The grenade launcher and flamer vets speak for themselves: 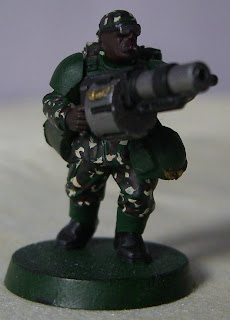 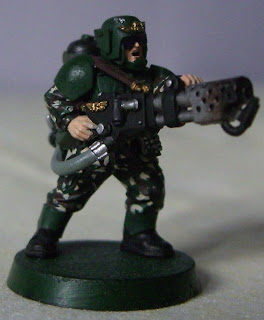 Next we have the vet with the hvy bolter. This one is interesting because it is an example of how I used to model my tripod hvy wpns: on a separate base and therefore interchangable. I have since changed this (as you can see with the A/P hvy wpn squad I posted) to a converted ovoid base - far more practical! Note the ammo box on the hvy bolter and the demolition charge hanging from his webbing. 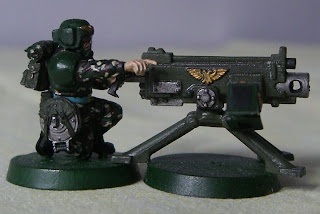 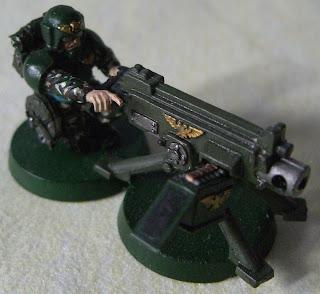 The wonderful Forgeworld (FW) shotgun veterans models - I haven't even finished making these, but the models are so cool they had to go in!

And finally, two more basic works-in-progress. From this you can note that the DPM camouflage is in its second stage (obviously it's based on British temperate DPM - maybe these days I'd choose something different, but that's what I started off with and I quite like it): it's a base coat of Dark Angels Green, followed by splodges of (in this order) Bleached Bone, Scorched Brown and Chaos Black. 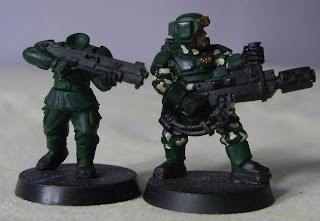 My usual caveat applies here: I'm not in it for the painting! I only use flat colours as a rule, and I can't do faces. I have particular difficulty with 'white' skintones and eyes - that's why so many of my troops look very scared (blanched and wide-eyed)!
A final word on basing and finishing: these models show my old style basing (a flat, untextured dark green base). They are not yet furnished with transfers or insignia and they have not yet been varnished. These might be the models upon which I try out a matte varnish: it's about time!