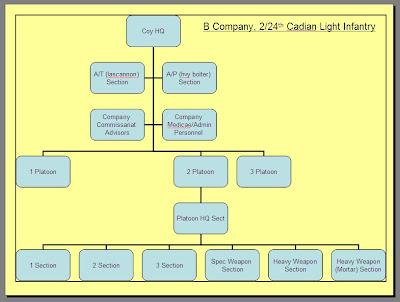 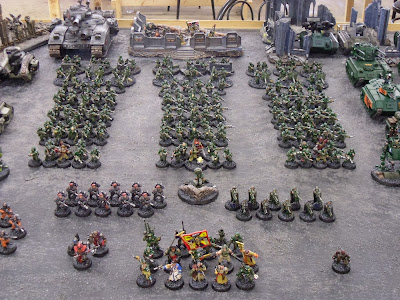 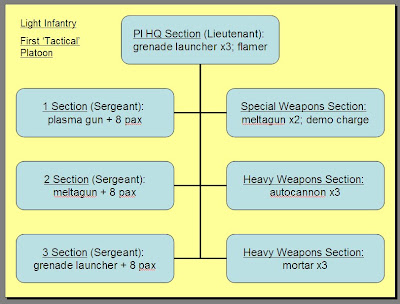 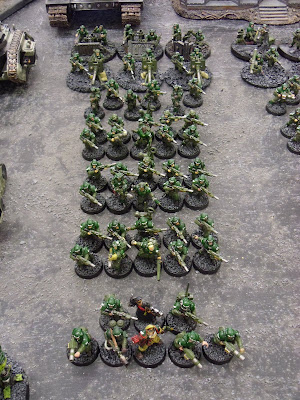 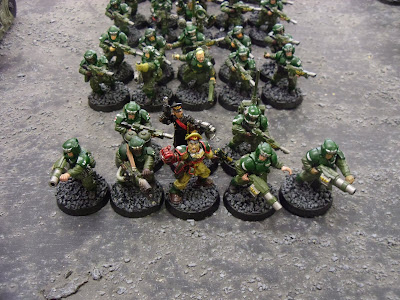 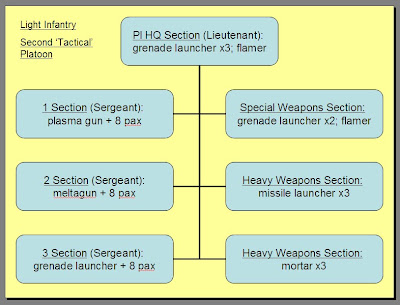 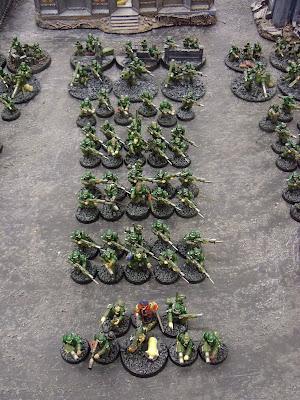 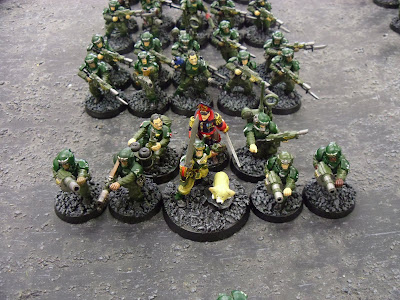 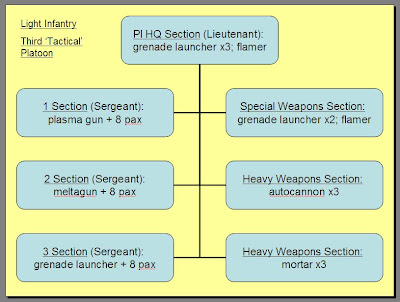 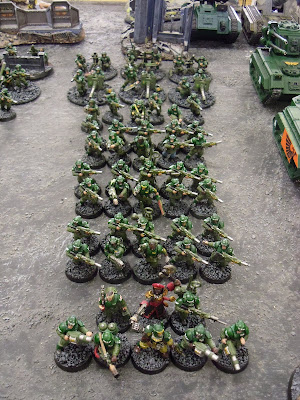 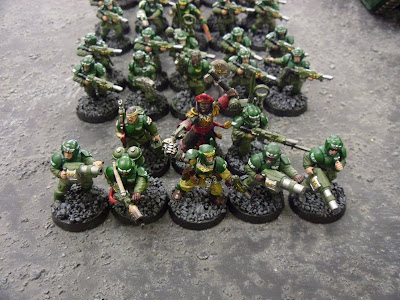 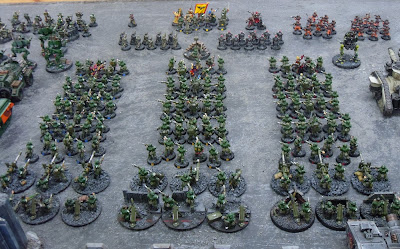 Well, I finally finished the last 5 stormies from this squad last month so I thought I'd better post them. Here they are, snapped during the 'whole army' pose:

And yes, those meltas were very poorly converted!

...Mine arrived this week, as I finally got the scrape together for it. It's made me a happy bunny. 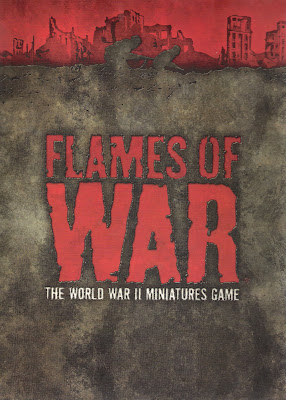 I'm embarking on a long-tem process to streamline my blog a little, so I figured I'd start today. Basically, I want to limit the unwieldy 'Posted Units' list on the right to the bare essentials. It needs updating, and I use it a lot for my own reference too, so there'll be a string of posts covering old ground to enable me to re-catlogue the content of this blog and weed out some of the older 4th Ed or old codex stuff.

Behold - my snipers (some better painted than others):

They're actually in two parts - there's a squad of 6 which can use the 'Ratling' rules, and there are 4 who are fielded as veterans with the Company Commander sometimes. Their camo is more 'urban' than 'temperate woodland', and they're the four kneeling either side of centre.

Here's their old post, and here's a [badly-photographed] tutorial I did a long time ago on painting their camouflage.


If there's only one thing I'm proud of from the last three years of blogging, it's the creation of the Painting Chart. I know many other bloggers have taken it on and made it their own, and I'm delighted to note that I still get an email about every three or four weeks asking me about it, so I'm very grateful to those who have been kind enough to give credit.


I'm always happy to share the files and my experience using them, and I love seeing what others do with it!


Please find below the most recent version, followed by the one from the original first post, back in August '09: 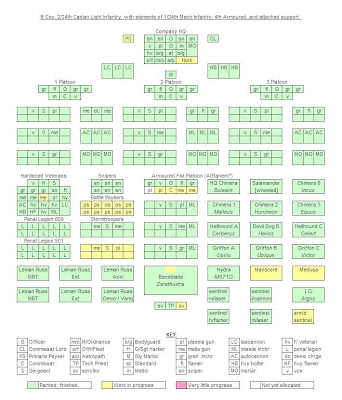 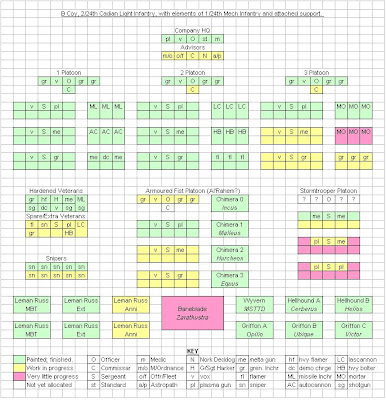 
PS: The 'Painting Charts' label, below, will take you to my most recent update.
Posted by Admiral Drax at 00:13 19 comments: Links to this post 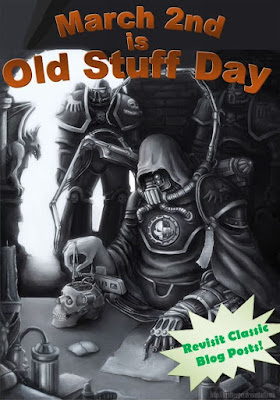 
Less activity over the past year, so I'll only include a couple, but posing the whole army together last weekend (Post 300) did make me think a lot about my old stuff. As with many modellers, the first stuff that you collect is often the coolest. However, 10 years ago, when I started to get back into the hobby and to build what has now become the behemoth of my sprawling Guard army, my painting was not good.


Nor did Tallarn Flesh and Devlan Mud exist.


So, my 1st platoon is badly painted; my 2nd platoon are okay, and my 3rd platoon look like humans and even have hand-painted aquilas!


Either way, I thought my first offering would be my now-almost-obsolete Command Squad. Pale, pasty, blobby and gloss-varnished...but at least the flag looks okay: 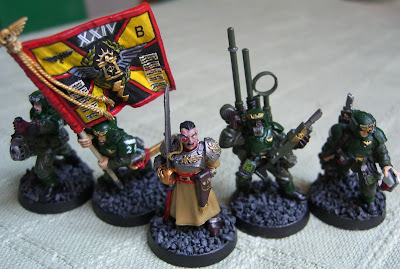 Secondly, someone else who could use a splash of Devlan Mud - Captain Stephenson ...also known as Stephenson's Horse; with his converted weapon: 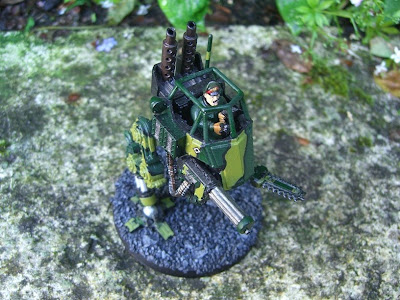 Next, one of my favourite (and rarely seen) conversions - the Wyvern ...as it happens, it seemed to spawn a series of other bloggers playing with the slung-back design (usually better than me) and this one now tends to be fielded as the chassis for my converted Hydra: 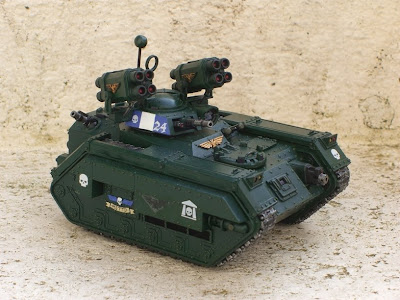 And finally, some of you may enjoy my short treatise on the demise of the Imperial Guard vox:

- Drax.
Posted by Admiral Drax at 21:01 No comments: Links to this post