Hooray! This is one of my favourite conversions: an cruddy old freebie griffon converted into a shiny salamander command vehicle. PLEASE NOTE: As of 13/06/09 this salamander model - whilst still a viable option - has been altered and updated. Please see this link for details...though the stuff about my hellhounds (below) is still worth a good look!
Also in this post are my lovely hellhounds - Cerberus and Helios. If I'd known I'd have two, I would have called them Phobos and Deimos, but I didn't. Don't ask why the second vehicle is called Helios...but I quite like it.

Obviously this is based on the look of the FW salamander, but in the rear views you should be able to see the base plate from the old griffon mortar, if you're familiar with it. The armour around the crew compartment would've been made of plasticard, but is just made of some old bits of plastic I had lying around - doubling the layer made it look far more realistic and also added rigidity. The angles were really tricky, but I think they came out well! The rivets were made from a roll of green stuff. 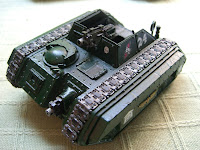 The inside is made of bits I had lying around. The bulk of the comms equipment is actually the shield from an old metal Cadian autocannon plus the improved comms bit from the newer IG vehicle accessory sprue. The antenna's come off, but I may replace it with a whip-type version for easier storage. I like the binoculars and the vision slit (the heavy bolter, incidentally, is a FW one, and is removable (I may make an autocannon version for the 'scout' variant). I dislike the transfers (decals). 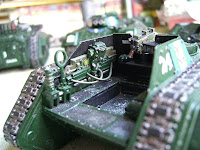 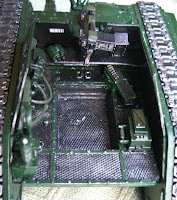 Next are my two lovely hellhounds - and boy can these two wreak havoc on a close-range battlefield! I've just noticed, actually, that the gunner in the photos (both hellhounds have removable P-M heavy stubbers) is the one that's unfinished - I wonder where the other one's gone... 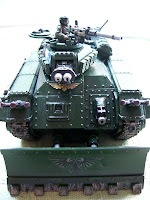 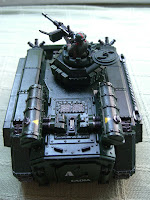 No real conversions to speak of here really: just the leman russ mantlet and (on Helios the track guards made out of old-style dozer blades. I did this not out of desperation, but because it reminded me of an Epic-scale vehicle from when I used to play Space Marine (as 'Epic' used to be called) in the early 90s. I like the slightly 'beefier' look of these flame tanks, and I particularly enjoy the little details on the fuel tanks. I should've had a close-up really. 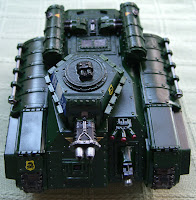 Just out of interest, my light vehicles are painted Dark Angels Green over a Chaos Black basecoat, and then rivets and a few details are picked out in Catachan Green. I then add transfers and seal it (as everything else) with spray Purity Seal, to add robustness.