So... before now I've posted my chimerae, hellhounds and salamander, but I thought (as it's half-term* and the weather's filthy) I'd post up the notes on my contingent of the Cadian 24th mechanised battalion. And yes - just to clarify, the regiment has one light bn. and one mech bn.

This basically includes all my light vehicles - tanks will be covered another time.

The problem is that I don't like any of the published army list options for a mechanised force, neither Chapter Approved nor Imperial Armour. I can actually make this force codex-legal (see below), but I don't like to as it always feels rather forced. Yet another reason to appreciate the Apocalypse rules!

To that end then, army lists notwithstanding, here are the constituent parts of my mechanised force:

Here's how it becomes an [almost] codex-legal list, based on the IG Codex: Mechanised doctrine: HQ= salamander + 2 sentinels; TP= 1 mounted pl. of 2 sects; 1 A/F squad; FA= 2 hellhounds; 2 sentinels; HS= basilisk and griffon. By dead reckoning (with accoutrements) I make this about 1406 pts. 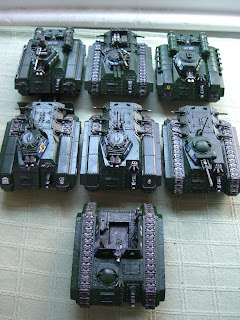 I may decide to make the mounted troops into stormtroopers (grenadiers) - I have the models for both but I've not yet decided. I probably won't - not least because in gaming terms I like the s/tprs' deep strike capability and in modelling terms I don't wan't to paint s/tprs green, which they'd really have to be to complement their transports.

Also, I have a converted Cadian rough rider unit, but although I like the models I don't really like their rules much, and I can't decide how to paint them.

So there you go: that's the mechanised element of the Cadian 24th. More pics will doubtless follow as and when stuff gets finished.

* "half-term": I'm a high school teacher, and in the UK we get a week-or-so off in the middle of each term.