NB: For some reason - doubtless linked to me fiddling about with settings - this post has no facility for comments. Sorry!

This whole blog thing really has forced me to get more painting done - brilliant!

Now, before I nip off to darkest Devon, here are the two A/P sentinels from my mechanised bn - both armed with multilasers: 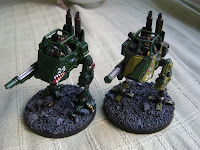 The first one presented here, Faith, is one part of the trio Faith, Hope and Charity [*see footnote] and is the first to have fully undergone a repaint.

Originally, the three were black with drab green disruptive pattern lines painted on (you might still be able to see some of the relief of this underneath the Dark Angels Green in certain angles). Much as I liked this scheme, it didn't go with the rest of the force, so I changed it a few months ago; sadly neglecting to strip them first. This one was re-armed with a multilaser; the others retained their lascannon, and I'll post them when(!) I finish re-doing them.

The nose art is something new for me: I've never done any freehand painting before, so I thought I'd start with something simple - I'm happy with the result, although maybe the "24" could've done with being a little higher. My wife painted the pilot, way back in 2002 when the models were new!

The camouflaged one originally came from an eBay win, but I decided to try a conversion. It worked fairly well, considering it was some time ago, now: the weapon is an old warlord titan weapon from Epic, and the ammo belt was cobbled together from hvy bolter ammo - I'd do it less clumsily now, I hope.

This sentinel is the only one painted this way, as that's how it came. I decided to keep it like this (a) because I quite liked it, and (b) because this sentinel was crewed by an officer (Capt. Stephenson - yes, it's a fairly obscure reference). Also because the others (at the time) were all armed the same and came as a trio. 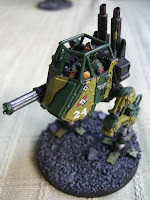 * Named after the three famous Gloster Gladiators from the defence of Malta in the 1940s. Also, by happy chance, an old friend named Faith got back in touch with me today - hurrah!