Hullo!
Well now. I've signed up for Ron's ++From the Warp++ Blogger Group, and he's setting us monthly challenges - just for fun. The first was to create a 40K scenario, which he's going to collate and publish as a pdf file on his site. My attempt follows.
Please note that all my entries for FtW challenges will be given the label "FtW Challenges", so they can be viewed en masse if required. Also, although it looks lengthy, it's actually fairly straightforward if you use the sketch map:
Scenario: Armoured Bridgehead

After weeks of fierce fighting, the city was in ruins and its defenders stretched almost to breaking point just to defend its blasted perimeters…but still it was safe in their control. The commander of the besieging force had other ideas though, and in the smoky half-light he paused before issuing the order to move out – he had to get a foothold into the town, had to drive in the wedge, and his fastest troops were on standby to sell their lives dearly that he might finally get to call the city his own.

In order to win, the Attacker must secure buildings/ruins as a bridgehead in the Defender’s deployment zone (DZ). For every complete 800pts played, one ruin must be secured (eg: 1 building at 1000pts; 2 at 2000pts; 3 at 2500pts). ruins are secured as objectives are captured in Capture and Control (p.91) except that in order to contest it, a scoring unit must have been within 3” for at least one game turn (this is to negate beardy final-turn charges from either player). If the Attacker manages to secure his ruin(s), he wins. If he is at least contesting his ruin(s), it’s a draw. Any other result is a victory for the Defender. The Attacker does not need to nominate his ruin(s). 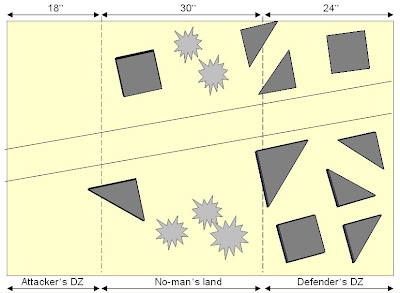 On a 6’x4’ table, place or mark out a road from one short edge to the other. Next, set up the edge of a ruined urban environment (leaving 6” between ruins) reaching roughly 24” in from one short edge. For every three ruins in this urban zone, one piece of scenery of a similar size should be placed in the other two-thirds of the board – preferably spread out. The urban end (up to 24” in) is the Defender’s DZ; the Attacker’s DZ extends 18” in from the opposite short edge, and the space in between is no-man’s land. Craters may be placed in no-man’s land (not on the road!) and before deployment the Defender may place d6 stretches of tank traps or razor wire within his DZ.

-- The Defender randomly chooses ‘troops’ choices totalling no more than one quarter of his army’s points cost. These comprise those units unlucky enough to be guarding the road into the urban zone chosen as the Attacker’s axis of advance: they are deployed anywhere within the Defender’s DZ (If you still have 4th Edition, you might like to use hidden set-up!) – the rest of the Defender’s units are placed in reserve, and he may not deploy infiltrators forward in the deployment phase. Units with the ‘scout’ rule may use it, and all his reserves enter normally (with any special rules) to assist in the defence.
-- The Attacker then deploys his army in his DZ. He may deploy and use infiltrators and scout moves as normal, but none of his forces arriving from reserve may arrive from the flanks.
-- The Attacker has first turn.
Roll a d6
-- On a roll of 1 the raid takes place at dawn – the ‘nightfighting’ rule is in play in turn 1.
-- On a roll of 5-6 it takes place at dusk – the ‘nightfighting’ rule is in play from turn 5 onwards.
NB: I ought to note that this has not been play-tested by me, nor will it as I've no prospect of a real game for a long, long time. If anyone tries it, let me know.
- Drax
Posted by Admiral Drax at 19:54