058 The Wyvern (or 'Missile-Shooting Tank-Thingy of Doom') Progresses


Firstly, glad tidings of great joy I bring: one of our readers, Koloth has not only very kindly donated the rounded hatch I was after (THANK YOU, MATE!); he has also been building a wyvern variant of his own (a version likely to be lined up as a fast attack model) and has allowed me to post
THIS LINK
to his pictures. Have a look, and whilst you're there, check out his other great vehicles - especially the Owen Rees-style armoured scout car!

I'm tired and I've been feeling as rough as a badger's backside all week, but the last couple of evenings I have actually made some progress with tweaking and basecoating. The first two pics are interesting because in the first one you see the MSTTD as I see it, but with the flash in the second (it's night time) the colours look ludicrously bright - and rather thinly applied! It's not even fully basecoated yet (Dark Angels Green), so please don't bother telling me I "Missed a bit!": 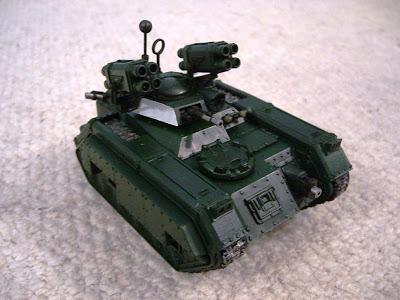 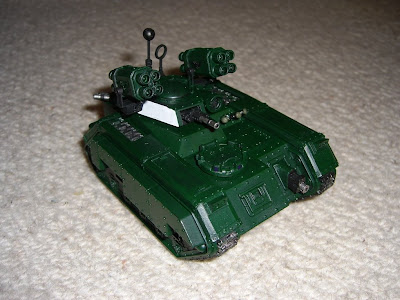 Tweaks to note include:
-- replacing the long antenna with a 'ball' array;
-- adding detail to the back of the turret;
-- the new top hatch, courtesy of Koloth;
-- installing two grenade launchers in the lasgun ports (see below): 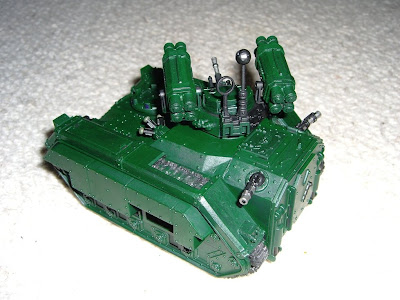 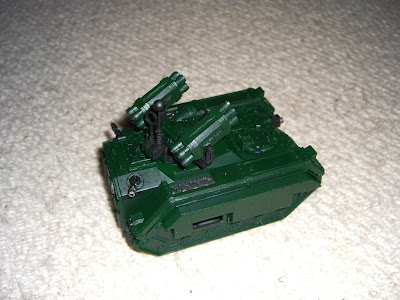 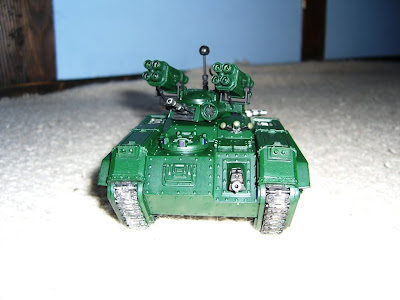 I think I'll keep it as an option (for +8 pts - only one can effectively fire at a time), but it ought to be remembered that although the turret looks big and powerful, it really isn't particularly powerful, and part of the reason it's an HQ transport is because all the weaponry and targetry's on the outside of the turret, the missiles being one-shot weapons and the 'main gun' being a poxy stubber. This keeps the (reduced) inside space relatively free for six pax and platoon-level comms gear. A breech-loading grenade launcher really is a pretty simple weapon to stow, too!
In other news, I'm also working on my griffon and my basilisk, both of which are being repainted to fit in with the other light vehicles. Even better: I discovered a spare griffon mortar platform, so that's now also being painted up as an alternative weapon for my basilisk, Ubique. Two griffons: cheap and nasty.
Cheers,
- Drax
Posted by Admiral Drax at 23:43