Firstly, HQ Section...although I'm not sure which officer to put with them: 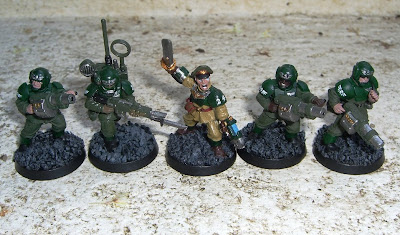 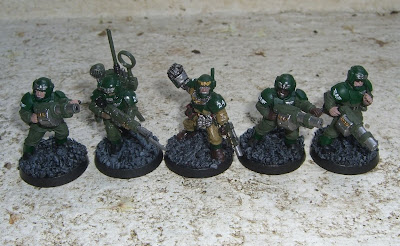 The surplus of officers I now have is because with the advent of the new codex I've gone from three rifle platoons and three support (2x heavy weapon; 1x mortar) platoons to three 'tactical' platoons with organic fire support squads. It doesn't really make a blind bit of difference which I field, as all my officers are equipped the same, and until I can afford the new plastics the metal models are staying!
Here's 1 Section: 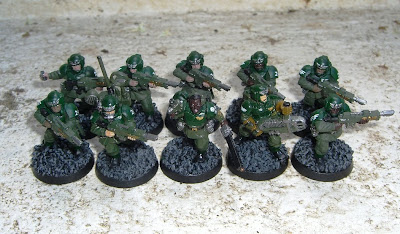 You'll note in both cases the newer models haven't been varnished (nor will they be, for a while as I'm re-evaluating my varnishing antics) and as such aren't shiny - I had to use the flash.
Thanks for your kind comments in the last post: I'm pretty pleased with those freehand aquilas...though the '24' designation on the other shoulder remains beyond me!
Cheers,
- Drax.
Posted by Admiral Drax at 23:59