Hullo!
Sorry for the confusion with Part I of this double-post. For those of you who took time to read it, this is how things panned out, with a few pics and notes. My memory's really poor, by the way...
1500pts - my complete infantry company Vs James's orks:
Mission: Seize Ground (x4 Objs); Deployment: Pitched Battle.
I chose to deploy and move second; failed to grab initiative.
From Imperial Archives: B Coy, 2/24th Cadian Light Infantry on parade beforehand: 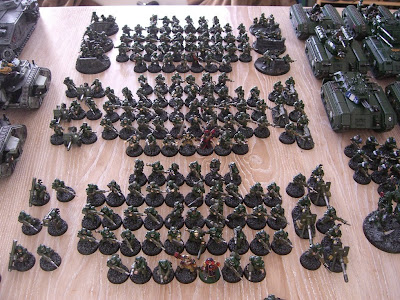 It was a pleasure to arrange a game with a complete stranger only to find that not only is he a proper gent, but he also has a wonderful fully painted army. Here they are arrayed across the table from me: 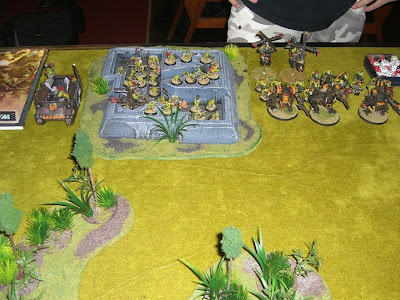 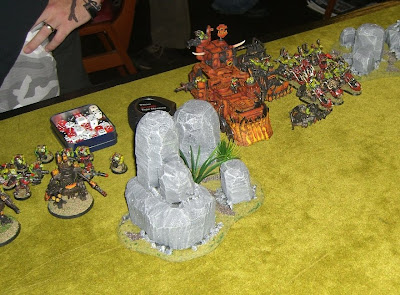 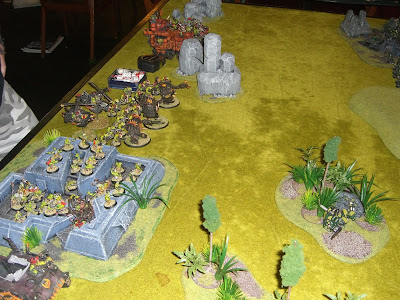 And here are my brave boys deployed to face them. The not-so-thin green line: 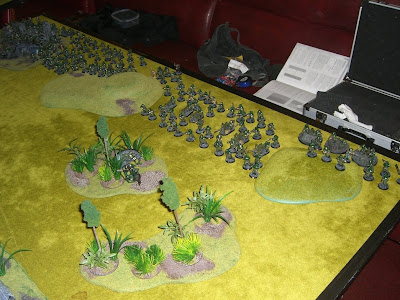 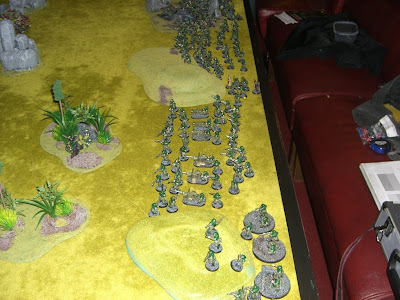 Here's the alleged nerve-centre of B Company - the OC with his command squad and - in an attempt to try something new and field a newly-painted model (more on him later) - my Master of Ordnance. Boy was he ever a huge waste of points! No surprise, I know. He's the one right at the back; they also have a mortar and a plasma gun: [sorry for cruddy focus] 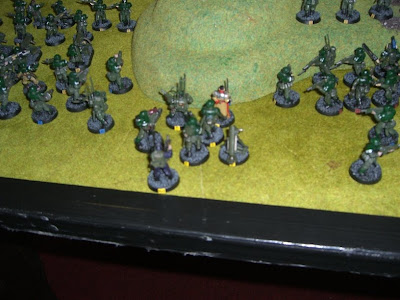 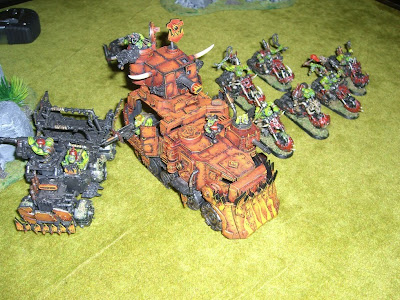 And my boys (mostly part of 1 Platoon) swarming over the ruins on my right flank: 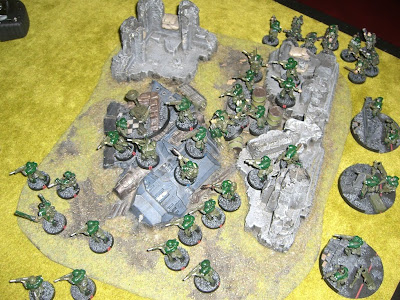 This is his hard-as-nails Warboss who slaughtered his way through my left flank in comically orky style. I got him in the end, but only after a lot of (rather fun) speedbumping! 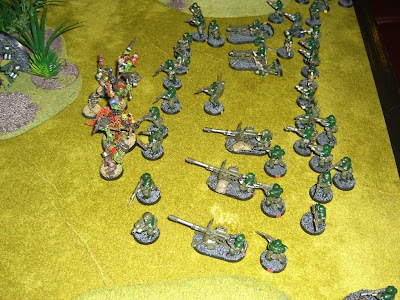 And the last pic, his last killer kan tied in a slow war of attrition with 1 Platoon's Special Weapon Team. Note the guy with the demo charge in the foreground: when he threw it it accounted for 10 boys from a mob of 20! Woo-hoo! 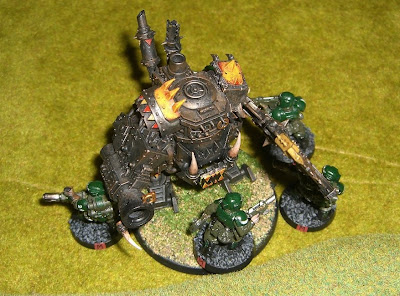 I love that pic.
In a nutshell: despite a few early casualties to mortar fire, the Orks gunned down the lascannon squad then closed with the IG with lightning speed (turn 2 assault)
The Guard met the Ork Waargh! on both flanks with an unfaltering hedge of bayonets and three depleted infantry squads - all of whom were wiped out - and then the orders to fire rang out and the charging Orks were mostly cut down wholesale. The demo charge and two flamers on the counter-attack wreaked havoc.
His light vehicles (incl. two deff copters) were all knocked out by turn two, as were most of my direct-fire heavy weapons (who - with the exception of the autocannon team - couldn't hit a thing!)
We had some fun with the Warboss on the left flank, as it seemed too boring to simply sit and shoot at him, so the Guardsmen took it in turns to die in front of him for a couple of turns. He was a hard bastard.
The Battle Wagon fell in a later turn to a meltagunner at short range, and the killer kans did extraordinarily well right upto the bitter end. His bikes (more great models) were nobly whittled down and sadly rather ineffectual.
The Master of Ordnance was (predictably) rubbish and a waste of points, but my two mortar squads were simply great - Death to Orks, that's for sure!
Models of the match?
Orks: Killer Kans and Warboss
Guard: Demo Charge 'Wrecker' and Mortar Squads.
Result: Win to the Imperial Guard (we ended the game with a turn in hand, IG on 2/4 objectives and about to get a third next turn).
Caualties: Orks: about 90-95%; Guard - about 30-35%
James was a true gent throughout, and a delight to play against. Cheers, mate!
Hope that was of interest. I'll post my list up soon...and James's if I can get it.
Cheers,
- Drax.
PS: Jeez, but I had a helluva lot of shots per turn...
Posted by Admiral Drax at 23:34

Email ThisBlogThis!Share to TwitterShare to FacebookShare to Pinterest
Labels: battles