This was inspired by a friend who's working as a medic with the RAMC out in Sandy Places.
As I slowly work through my diminishing pile of unpainted guardsmen, I keep going back to the Box of Painted Personnel No Longer Required for the War Effort. Until now, I've been re-assigning them (mostly officers, sergeants and vox-operators) to new units since restructuring my force for the new codex, but yesterday I discovered I was down to the last three: "Medic!" 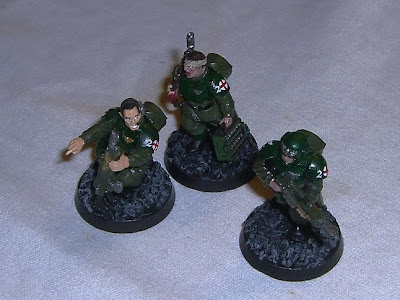 I love these three models, and it pains me a little that - unlike their Coy HQ colleague - they're very unlikely to ever get fielded again, as I can't for the life of me justify spending 30 points and losing a grenade launcher just to protect a subaltern.
In a flash, however, of rare inspiration (coincidentally linked to but by no means a consequence of Col. Corbane's excellent recent post about battlefield ambulances) I figured a group of battlefield medics could be good for a giggle with a co-operative adversary.
I figured that I could use them as an alternative 'special weapons' squad - 3 riflemen and 3 medics at 5 points each for a total of 50pts. As for their special rule, I drafted the following:
"MEDIC!" - The unit grants Feel No Pain to a single IG unit no greater than 12 models within 6". The roll is made at 4+ if all three medics are still alive; 5+ if there are two and 6+ if only one remains. If using this special rule, no member of the unit may act during the shooting phase.
Now, I admit that (given how rarely I play) I'm unlikely to field them often - if at all - but I liked the idea of the battlefield medics being on hand. Doubtless the rule could be abused too, but I'm unlikely to, so it doesn't really matter.
It's all just a chance to get some models I enjoy onto the table! 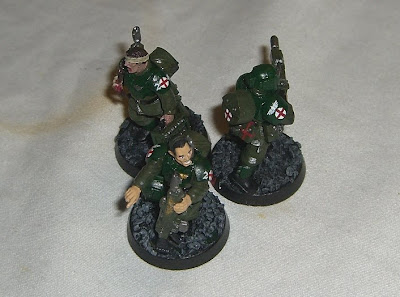 I'm not a big fan of posts which start by apologising for absence or a lack of news, so I won't, but I've been experimenting and thinking of late, and here are my two main realisations:

1) I can just about sit comfortably and paint with baby Hazel in a sling around my neck, and
2) If I can focus, concentrate and access enough spare time (and wakefulness!) I should(!) be able to get the last of my infantry company finished by the end of the Christmas holidays.

Well, it's something nice to aim for, anyway. After all, Suneokun has finished his!

Dear All,
Thanks for your kind comments and good wishes for my wife and new baby - here's another project for you:
Going on Campaign
Col. Corbane - whose great blog I know many of you frequent - has started to put together a smashing new resource in order to provide information, ideas and material in order to help people to get campaigning: click here to take a look, or follow the link above.
It promises to be really good - but what'll really allow it to thrive will be your contributions!
I'm going to see if I can lend Corbane an occasional hand with some wordsmithery, too: hence the plug.
Campaigns - hard graft: 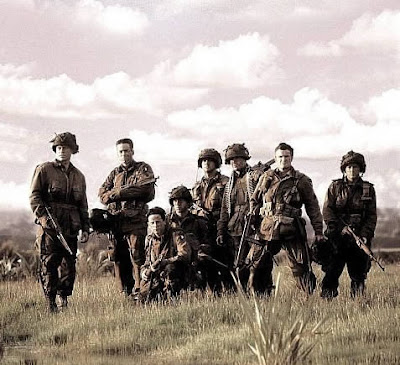 [image from www.dday-overlord.com - used without permission]

Huzzah!
At High Noon today (Saturday 07/11/09) the beautiful Mrs. Drax gave birth to little baby Hazel, at 7lbs, 12oz, and changed my life for the better, for ever. Here she is, still very new to the world: 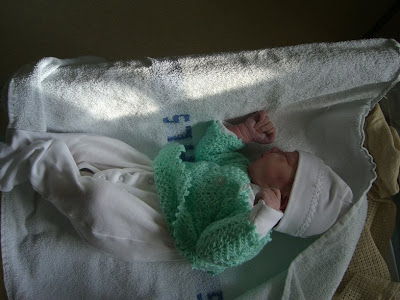 Looks like I made that timely 'reserves' roll after all!
My wife and I would like to say a truly heartfelt 'THANK YOU' to all the readers of this little blog who've been kind enough to offer us good wishes over the last few months.
Always appreciated.
- Drax
(very happy, very excited and very tired.)
Posted by Admiral Drax at 21:42 37 comments:

Well now, this is a tricky one.

Ron, over at From the Warp has asked us for a collaborative post exploring our 'must have' unit - that without which we would never leave the troop carrier (compulsory units aside).

The only problem? My 'must have' unit is a compulsory choice: the humble platoon command section. 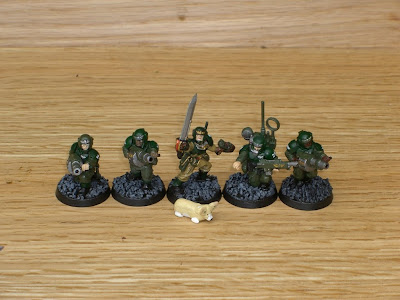 Before the new Codex: Imperial Guard came out, this was a 'no-brainer' - junior officers were great! They could automatically give anyone nearby a Ld boost, and with my typical doctrines would enable them to infiltrate, move through cover and (brilliantly) rally those troops nearby - even below 50% strength.

But now? Strewth! They have hardly any bumps, they can't afford medics anymore (at 30pts each) they no can longer inspire their troops and their sodding vox batteries have run down, leaving them with a measly (read: 'pointless') 6" range.

Simple. For 50 points I can get a 5-man scoring unit with Ld8 and 4 grenade launchers. Genius! For 105pts I can give them a chimera too! They can scoot around, shoot four S6 shots out to 24", and maybe even occasionally give out some useful orders (hmmm...).

But here's the thing: they're a real throwaway unit. Officers attract fire because they look important, they sound important, and they used to actually be important...but they're not! Of course they can be tremendously useful, but under the old codex, if you could kill a platoon's officer, you'd scare the horses and panic the men...they'd scatter like rats out of an aqueduct.

Now? Who cares! The infantry can watch Rupert the Officer getting himself slotted whilst ostentatiously striking a pose, turn to their sergeants and say "Right then, Sarge - what next?". The bump to sergeants has rendered the officers pretty much obsolete. So it goes.

So I love 'em. If you want to tool them up for anti-tank duties with four melta guns in a chimera...great - go for it! If you want to keep them back mumbling their poxy orders and maybe counter-attacking...wonderful! If you fancy keeping them out of sight with a mortar team...smashing! For me, I'll pretty much keep them on foot with three or four grenade launchers, and have my little bit of Draxian fun.

Thanks Ron, and cheers for reading, everyone.