I do NOT have hobby burn-out.

Far from it, in fact. What I do feel, however, is a pretty significant sense of ennui.

That's right: I went and dropped the e-bomb. A GW-e-bomb to be more precise.
Let me explain [knowing that I tend to get too long-winded, I've broken this post down into daily chunks]. I'll try to keep it brief, but - well, you know what I'm like by now. At least there will be hobby pictures too!

In theory this is the time of year when work starts to trail off a little for me; in practice, I've just taken on a second job as an examiner to try to make more ends meet, so over the next month most of my hobby time will go instead to marking papers... but that's not what this post is about - it's just a wee explanation for the minimal posts of late.

Proof beforehand that I haven't been idle, though:

APPARENTLY, THERE'S A NEW EDITION OF 40K OUT.

Now, I've been playing 40k on-and-off since 2nd edition, and I've always got excited by either new IG codices or new editions of the game - who wouldn't, right? I was dead keen to get the new IG [AM?] Codex...and then I read it...and I kinda went 'huh'. And then I kinda re-pointed my normal list and went 'Huh,' again...and since then I've not really opened it.

Now, a big part of this is that I only very very rarely get to play, but a bigger part is that - well - the new codex (whilst vastly superior to the last one) just wasn't very exciting hobby-wise. There are a some new models that I'm not very excited by and certainly cannot afford (but more on that later) and the golden opportunity to try to re-engineer my lovely Griffon mortars into the new Wyverns...and that's it.

So the deflating nature of the new codex, coupled with my ever-decreasing hobby time has made me - at best - not really care too much about the appearance of a new set of rules to kinda replace the 'old'(?!) sixth edition.

I only every played a handful of games with 6th Ed - maybe eight or nine? - and the two things that really seemed to change the game with it were new psyker rules and the blossoming of flyers and flying MCs (complicated and mostly irrelevant to me as in both cases I've had no models which really use the rules and no real means of countering them either) - this made the prospect of playing competitively (or even pick-up games from unknown opponents) absolutely pointless for me, as I essentially kept playing an army tailored to 5th Ed.

The new edition seems popular with the very vocal (or verbal at least) online competitive players, and I'm given to understand it's good for narrative play too, but I figured as I play so little and have so few spare hobby pounds I'd just wait until opportunity, finance and need all combined before making the investment. Which brings me to...

WHAT AM I GOING TO DO WITH ALL THESE GUARDSMEN?

Or at least, nothing new.

I've decided to (a) pretty much keep on doing what I'm doing and (b) follow the examples of others. By this I mean the following:

a) For about three years now (!) I've spent very little money on GW and very little time. I finished painting up the bulk of my army a couple of years ago, and the ONLY significant purchase I've made since is my Manticore. I've decided to continue this approach; a decision made significantly easier for me by my general lack of enthusiasm for the new product lines and the lack of structural upheaval in the codex.

b) I'm going to follow the wise example of the likes of Zzzzzz and Col. Scipio in that I'm going to take a more mature approach to actually playing. Why should  I bother trying to keep abreast of increasingly irrelevant [to me] rules? I should just build the things I want and play them against like-minded folks using the rules I want - or whatever bits of them I can remember. Great idea - sod it!

To this end, please find below my current and revised list of 40-related hobby projects in no particular order:
You'll note that none of these involve buying anything new, and quite a few involve getting bak into conversion work.

Essentially, at the top of the list in my hobby notebook (The Seventh Book of Arcane Scribblings) is the line 'Stop any further 40K expansion.

...and I reckon that just about sums it all up.

In Part 2 (in a couple of days), I'll look at my future directions for Flames of War and ask for some hobbying help. Stay tuned, and thanks for reading!

As I was finishing off my universal carrier-esque 40K centaur artillery tractor last weekend, I took the time to attack something I'd been waiting on - adding drivers and bren guns to my inaugural 11AD Carrier Platoon. 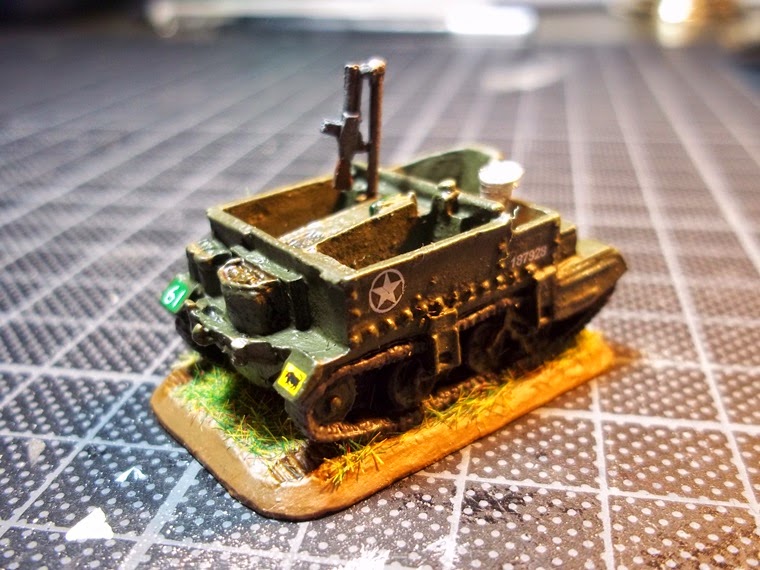 Driver-wise, I bought the figures from Peter Pig: they're absolutely excellent minis [see previous post and link here], but a wee bit too big for the comically tiny confines of Battlefront's universal carrier cabs, so I had to cut them down drastically. Quite laboriously too, for I have no decent tools! One's done and painted, a second (sporting his service cap, for a change) is almost done but unpainted, and a third is yet to be attempted.

Gun-wise, a pack off eight 15mm bren guns costs only a quid from MJ Figures (UK) [link] ad the little models are absolute corkers! The only trouble with them is that the bipod is a solid triangle [meh], and the bipod had snapped off a couple of them, although this is not too surprising and in no way a problem.

From my research, I have decided to mount the extra brens in three different ways:
1) Propped up in the passenger compartment. Realistically, I've had to put it in a slightly unrealistic place (over what I believe is the engine vent?) rather than sideways on behind the driver, simply because the models are not fine enough at 15mm, but I'm happy...not least because I hit upon using a staple to provide thin enough legs for the bipod: 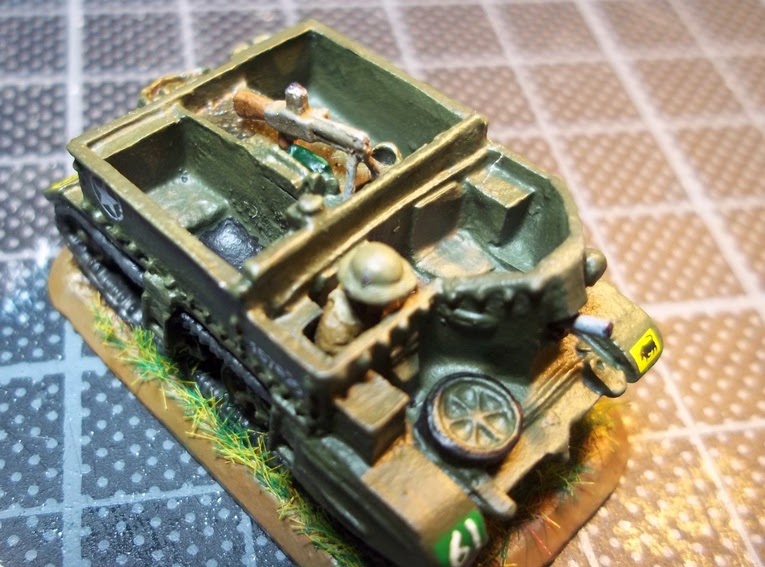 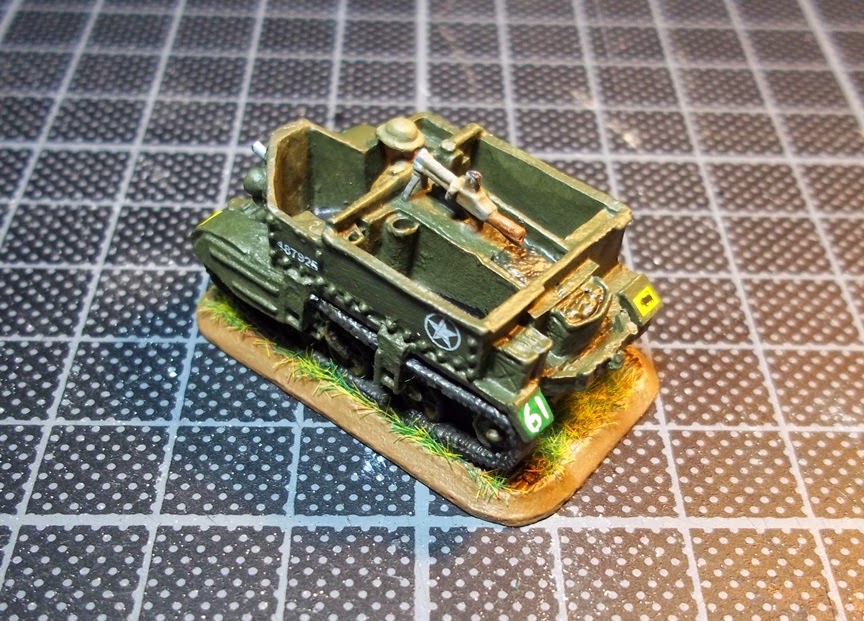 2) On an AA mount. The upright is - of course - just a bit of paperclip, but I reckon it looks alright. At the moment, this one has the driver in the service cap. Hmmm. We'll see if I like him enough to stay. 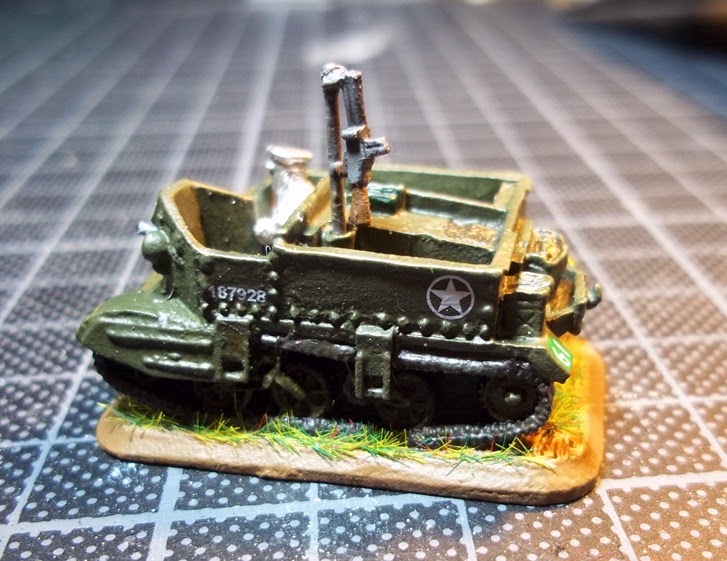 3) Finally, the last carrier will have its bren clamped to the inside of the starboard hull. Easy.
I'll let you know when these are finished - I just needed to acknowledge to myself that I have actually managed something!

This Centaur is the first 40K model I've finished for myself in a looooooooooooong long time...and although it's a simple model, simply painted, I feel quietly proud of it. Pics first (enjoy the clashing colours): 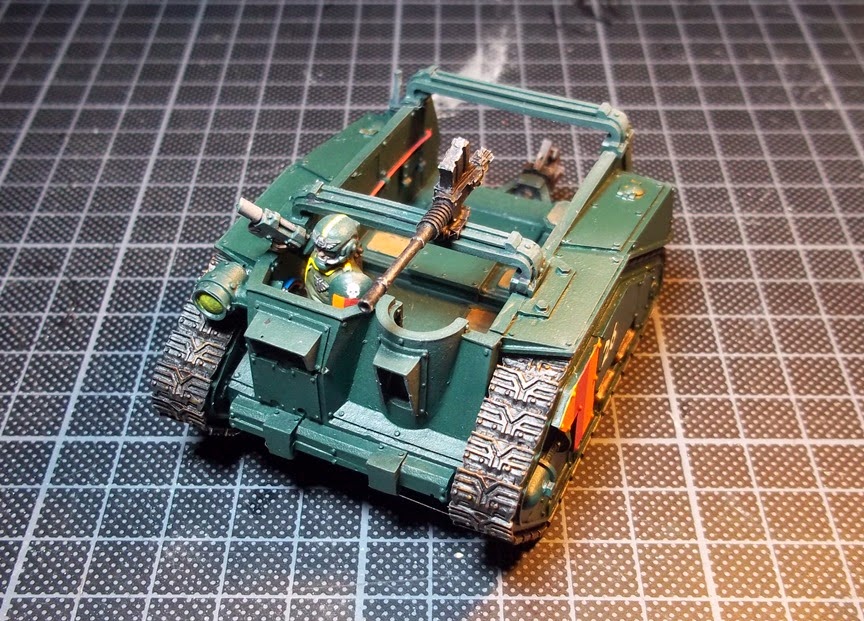 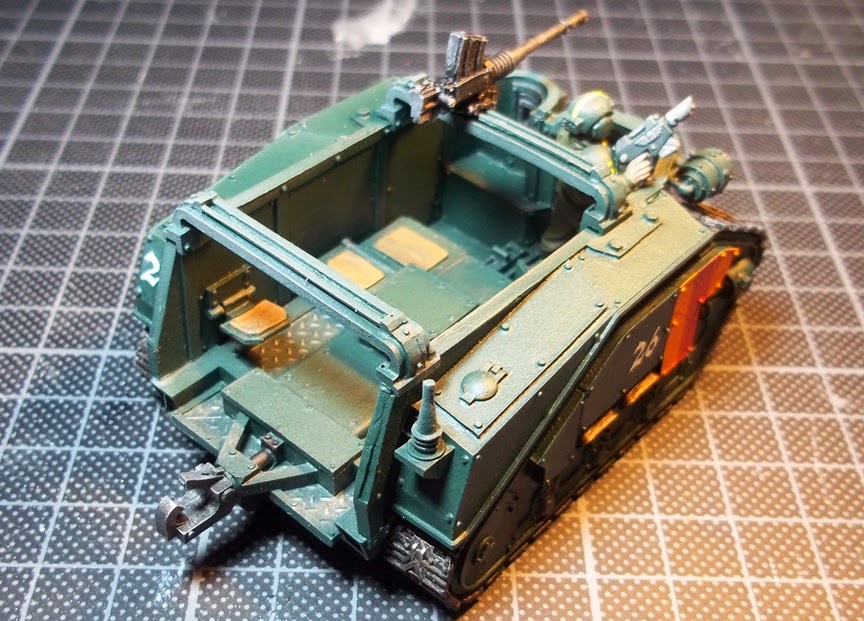 At some point I'll finish up the sniping gun (and its crew) for this to tow (one of a brace of heavy anti-tank guns kindly donated by Zzzzzz), but for now I'm just quietly pleased to have finished something; not least given the monthofstupidbusyworkandstupidillnessplaguingmyfamily from which I am only just starting to recover. Just me. The rest of my hearthguard are all still up to the gills with plague.

A second post will fllow fairly closely behind this one, as I'm also quite pleased with some Flames of War conversion work I managed to crank out in the same couple of sessions. Yay me.

Take it easy, and thanks for sticking with me,

...and given the last fortnight's bouts of D&V sickness in the homestead, I haven't so much as unlocked the 'Hobby Drawer of Sharp and Sticky Things' in my desk in almost three weeks now. 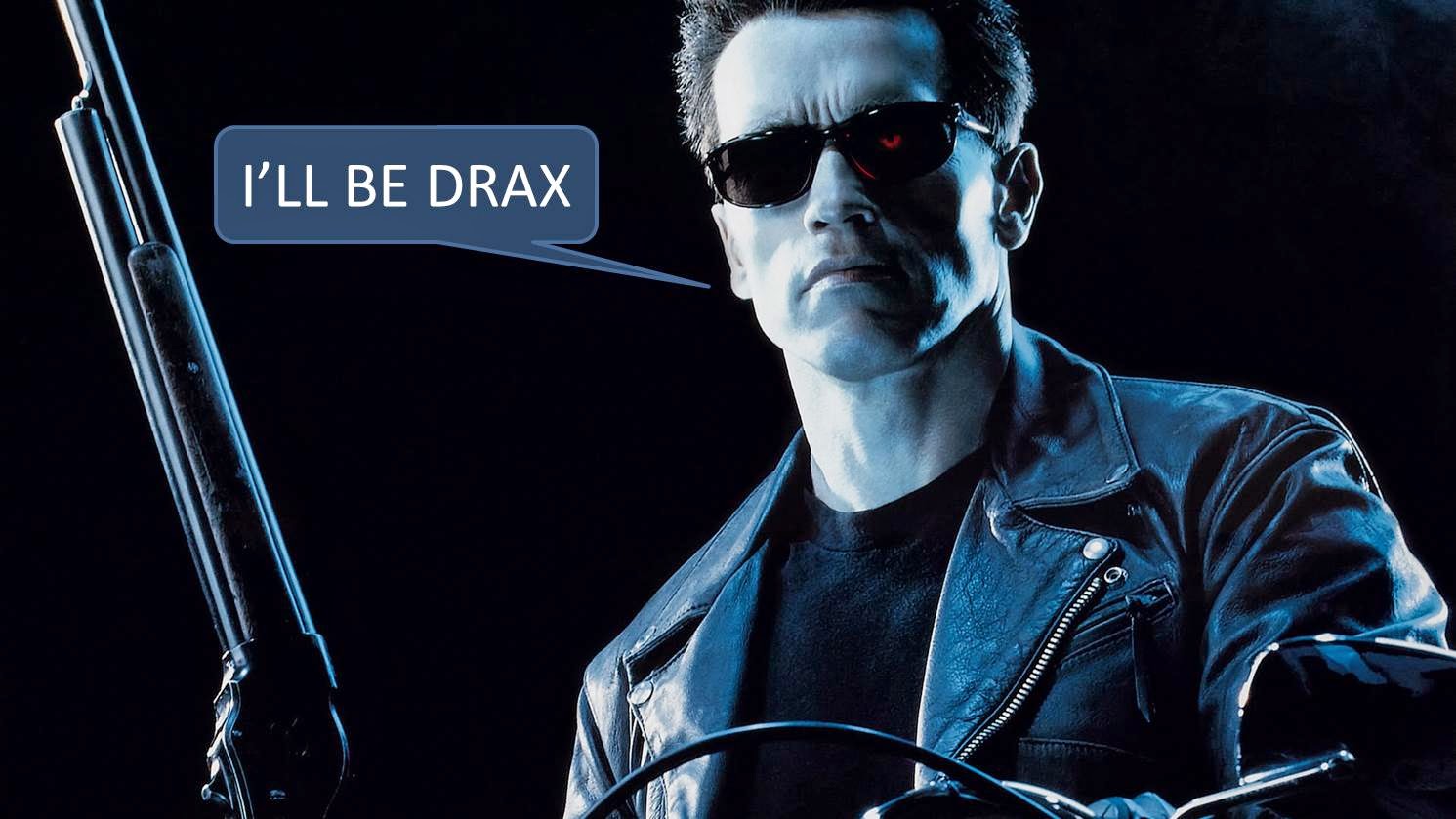 But I'm excited about the forthcoming weekend of hobby goodness and bacon Chez Zzzzzz and then it's just one. more. blasted. week. until. half-term. And then the pressure will ease a little. It's been 18hr working days for too long now, and I need a bloody break.

So watch this space.

Thanks for your patience,

PS: There are lots of exciting projects bubbling around my poor head at the moment...
Posted by Admiral Drax at 23:15 3 comments:

No time for hobby stuff (understandably enough) - barely any time to sleep! 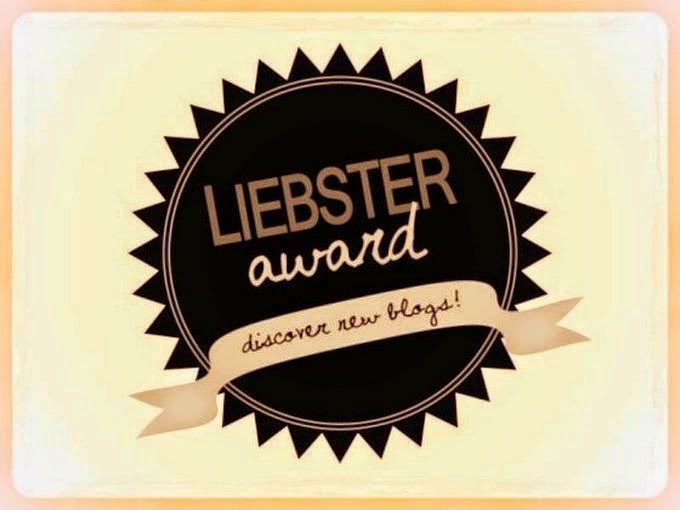 I was grateful to receive a tip-of-the-hat this week from The Responsible One [link] with a 'Liebster' nomination: thank you! I know these aren't everyone's cup of tea necessarily, but I am a fan of 'paying it forward' when I can, so I'm going to take the opportunity to shine a light on some of the stuff I've discovered (or rediscovered) more recently.

Being prone to longwindedness as I am, I shall endeavour to keep the length reasonable whilst following The Responsible One's excellent lead...

Here's where I get to nominate 11 blogs that I want to bring to your attention:

In no particular order at all, then, please give these a glance [NB: Sadly, I don't expect them all to pay it forward!]:

Right then. Here are The Responsible One's questions:

1. Why did you start blogging?
A) Mostly as a means of tracking my own progress; not least pictorially. I wouldn't ever have dreamed that six years in I'd be sitting on 172000 hits. I certainly couldn't have foreseen the friends I've made as a consequence! The name was courtesy of my dad (unwittingly) who talked to us as kids about the real, awesomely-named Admiral Drax.

2. If you could change one thing about the wargaming hobby, what would it be?
A) Easy: GW's heartless stupidity. Apparently it's not difficult...why are those in charge so hell-bent on draining their hobby of affordability, clarity and fun?

3. What is best in life?
A) Being greeted when I get home by my kids.

4. Do you want to live forever?
A) God no. I'd become utterly insufferable!

5. Fame or fortune?
A) Fortune. But preferably neither.

6. What miniature are you most proud of having painted?
A) Tricky. Painting-wise,I suspect it's an odd toss-up between (a) the Liaison Party banner-bearer I painted up for Zzzzzz [link], 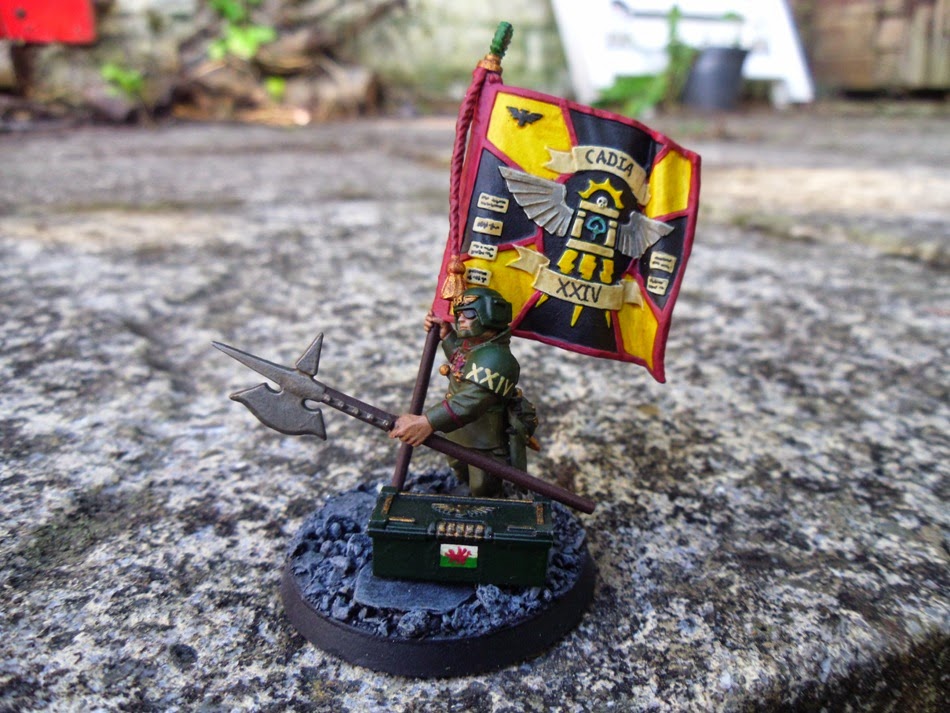 (b) the artillery staff stand for my Flames of War 25pdr battery [link], or 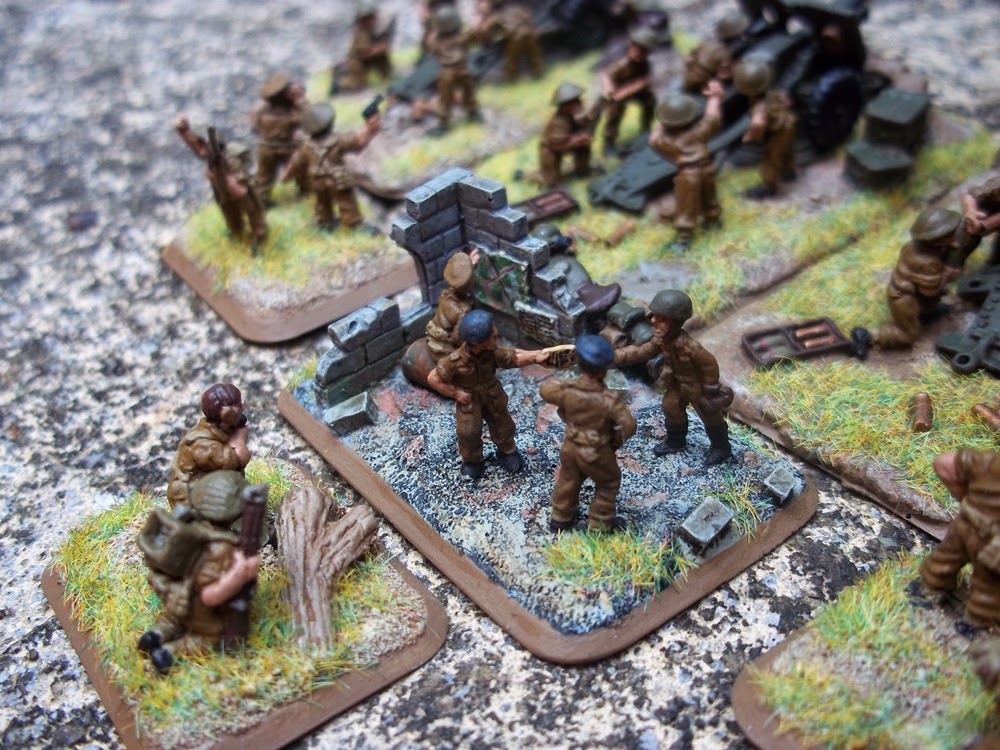 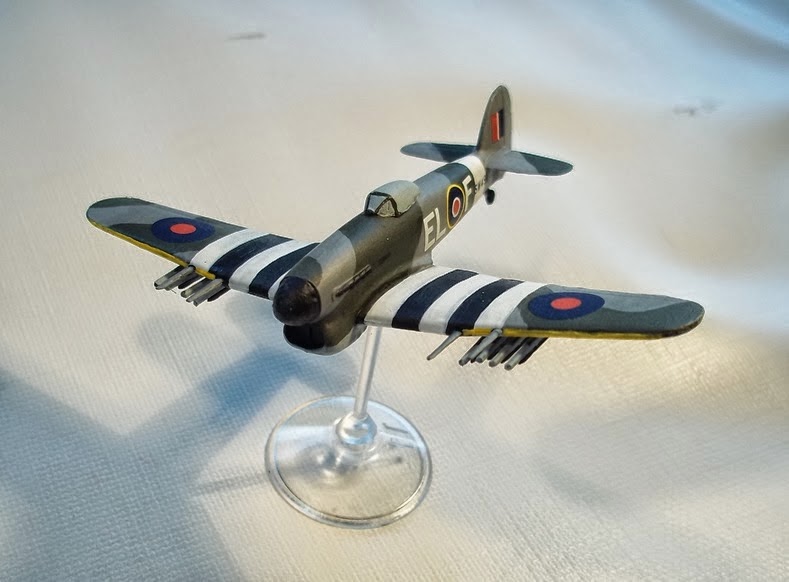 7. How do you deal with burn out?
A) I like to read new rulesets, safe in the knowledge I'll barely ever - if at all - get to play with them. That, and painting stuff for others - I've found that can help.

8. Why is a raven like a writing desk?
A) Mrs. Drax would very much like both of them to be in our house.
9. Star Wars or Star Trek?
A) Star Wars... but Battlestar Galactica recently! Oh, and I have been to the awesome Star Trek Hilton in Vegas. Even for a non-trekkie it's something pretty special!

10. If you could only buy from one miniature company from now on, which one would it be?
A) Plastic Soldier Company. Their models are lovely - cheap too - and their range just keeps growing and growing! I'd never get bored.

11. What is your favourite take away?
A) The [REDACTED] Inn in the next village. They deliver. Amazing grub; no washing up. Bliss.

And finally, out of a combination of laziness and nosiness, I shall pose the same questions I 've answered above to anyone who cares to shed the light on any other new or pertinent blogs (please). Until next time then, thanks to everyone, and keep well. - Drax. PS: If I had a favourite conversion, it'd be this: 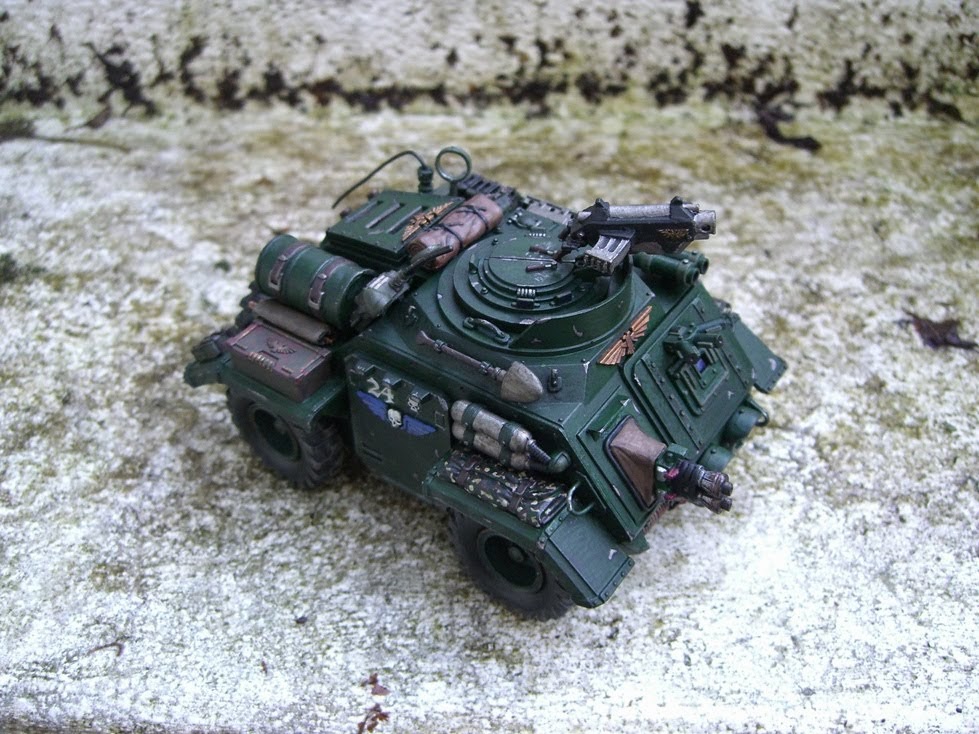