Just a quick update pic of my Sikhs: 2Lt, radio man and Sections 1 and 2: 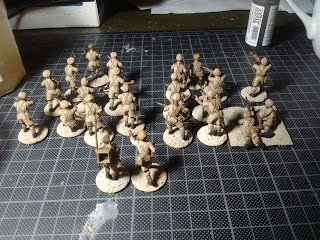 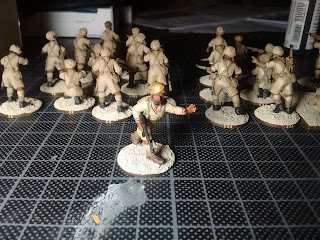 I've almost finished the next 12 minis now, too.

And yes, that subaltern is wearing a cricket jumper.

I'm off on my travels again (a wedding in London, no less!) and so painting has had to be postponed even further, but I'm taking late-night advantage of my hosts' WiFi to finally post the few pics of my new Desert Rats Sikhs that I've been working on.

Not much explanation needed - I'll reflect on the minis and the process in a future post. For now, all you need to know is that (a) the bases will be adorned yet with some tufts etc., and (b) that - inevitably - they look much better in the flesh. For example, the NCO's rank stripes barely show up here, but they are there - I promise! 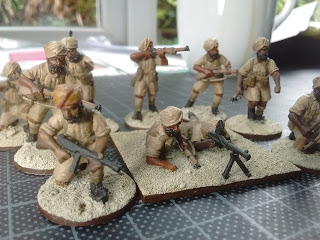 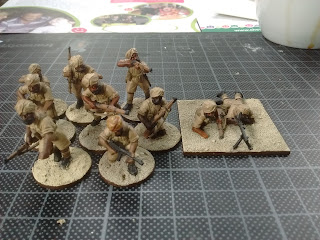 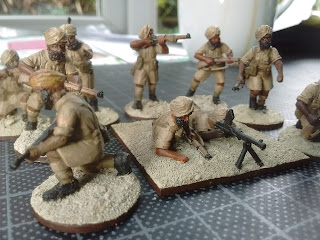 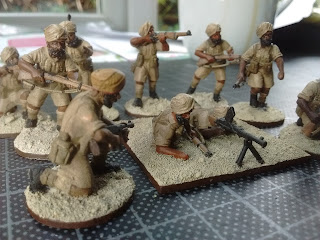 The weather has actually been glorious recently, so no chance of photographing new units properly(!) but here you'll see one of them in action at least...
Last Friday I ran a small 750pt introductory game for a seasoned player interested in converting to Bolt Action.


When I've tried to play intro games before they've always been unsuccessful, because despite my best efforts, I've won.

I didn't this time.

The Brits took an absolute thrashing at the hands of some veteran SS.
We were wiped out to a man, but it was a cracking game, and we didn't go down without a fight!

By the end of turn 6 I had been tabled, but it was smashing.

We'd played an 'open' game, with me talking Peter through his options as and when they appeared, so his Germans (on loan from David, who runs the club) had a decent crack at it.

Highlights:
So there we are.

That's all for now; tune in next time for some unit updates... 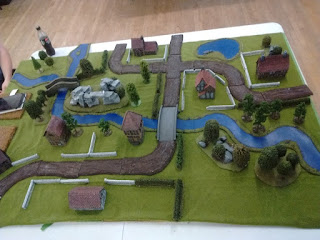 Well, here is a brief overview of the 2000pt game we had at the club last Friday: this time I allied with Alex and his Paras once again against the Germans. A new scenario and a new opponent, too: our very sporting foe was a chap called Adam, and with the gorgeous table that Alex'd set up, he suggested we play one of the missions from the 'Battleground Europe' expansion: the Allies had to seize a bridge from the Germans before they could blow it. Both sides had good, fluffy lists, and with one normal and one tank platoon, Adam's force was appropriately tank-heavy.

Long story short: the plucky Brits absolutely triumphed. When 'time' was called (at the end of turn 4, I think), Adam was down to two heavily-pinned tanks, his officer, a spent air observer and half a grenadier squad.

For our part, I had lost one lorry and three riflemen, and Alex had lost three Paras.

The bridge was ours.

In retrospect, Adam was up against it, as we were using a scenario aimed at the Germans defending a wide, heavy duty bridge with better field of fire...but even so, the dice gods really were NOT on his side.
For instance, when Alex's artillery observer called down his fire, it was a.m.a.z.i.n.g: it killed outright his MG42 unit and his medium mortar before also destroying his Puma(!) AND heavily pining two of his remaining tanks.
Ouch.

When mine came in the following turn, it dropped short (I rolled a '1'!) and pinned pretty much every unit in our force which hadn't already been pinned by Adam's annoying airstrike.

The dice were on our side.

And that's about it!
It's now the following Saturday, and since this game I've finished two more units (yay!) and played another game of Bolt Action...so I've got some catching up to do.

A straightforward one today: in addition to ploughing through my early war desert Sikh troops (of which the first elements should be completed by the end of this week), I have been trying to tie up some of the many loose ends from my 11th Armoured.

At the top of that particular pile was this - my Cromwell CS variant:
With its converted 95mm close support howitzer (which functions as a rather useful 'medium howitzer' in-game), I've designated this vehicle to be a vague representation of the exploits of Capt. Walter Luttrell (or 'Colonel Sir Geoffrey Walter Fownes Luttrell KCVO MC JP' as he ended up) of HQ Troop, 15th/19th The King's Royal Hussars, whose bravery and professionalism  under fire in the vanguard of 11AD earned him the MC [link here]. 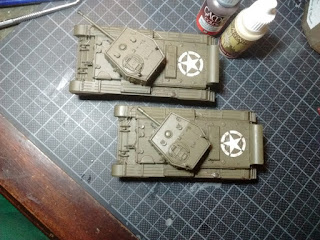 I'm pleased with the way the vehicle has turned out (not least because I had to do the white turret details by hand), but as it sits next to the normal 75mm Cromwell variant, I cannot help but think that I really need to get some stowage on these vehicles to differentiate them a little more.
I also played a game last week, so there'll be a post about that soon...!