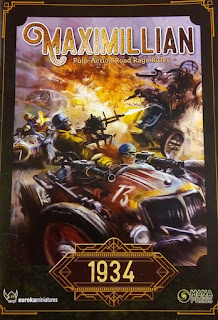 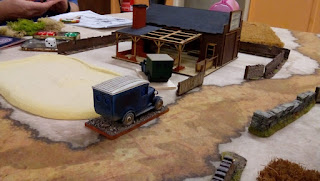 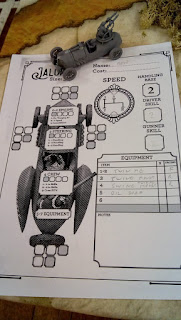 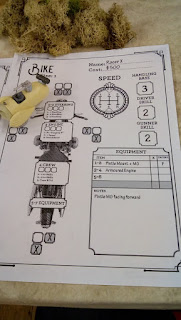 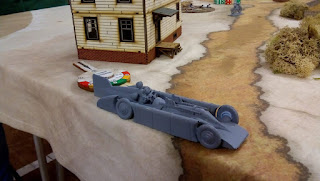 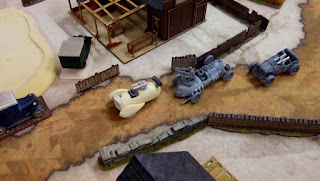 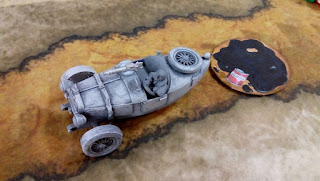 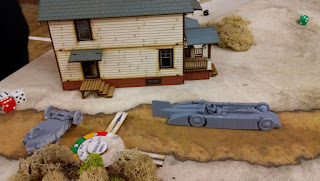 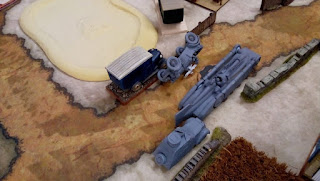 Last post, I went through the fun I had recently at Kirton Games in Crediton, and I said I'd write a few words about the venue, so here goes...

The place is amazing!
Mostly funded by a successful Kickstarter campaign a short while ago, the new shop is in a fantastic location in Crediton [link here] and is staffed by a very friendly, welcoming and affable bunch. They run all sorts of special and themed events, and they cater to a wide (and increasing) variety of games and gamers.
There are two main gaming rooms: the front one, which is what you walk in to from the street entrance (and which has all the toys for sale), and the 'gaming loft' itself, upstairs. All-in-all they have over a dozen 6x4' purpose-built gaming tables, and by purpose-built, I mean that you don't break your back whilst using them, nor do you have to worry about cracks and ledges between trestles. They even have lower tables for card games like Magic: The Gathering.
There are comfy sofas upstairs, and downstairs a kitchenette with teas and coffees available for purchase (free for members) and a range of other splendid snacks on offer for sale. I have it on first-hand evidence that there's a rather good chip shop nearby too! 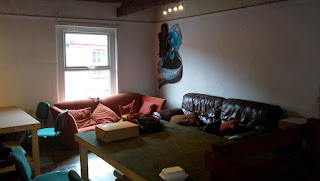 Beside the kitchenette is a brilliant space: a hobby bar! 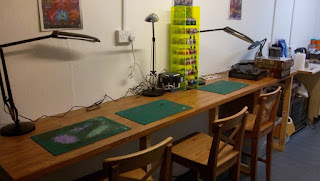 As I understand it, the range of paints available is again a free bonus for members, and the lamps and painting/modelling stations are evidently installed by someone who knows their stuff. Genius. 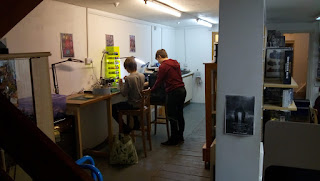 Talking of genius, one of the staff's strengths is in IT, and I was really impressed by the combination of well-equipped podcast/recording studio and a 6x4 gaming board permanently set-up for live-streaming. What a great opportunity! The studio can be rented for podcasting too: clever stuff.
Elsewhere, the astonishing building is as convoluted and higglety-pigglety as one would expect from one found in an old market town (for any US readers, just imagine something out of Diagon Alley from Harry Potter), and there are at least three or four other usable spaces with plans afoot for a roleplaying room and a cosy boardgaming room, amongst other possibilities. What joy! What potential!
The store is still a work-in-progress, and I guess the local community there (it's 70 minutes' drive for me, sadly) has put in a lot of person-hours to help get the place up and running, but by gum it really is an amazing store: if you're anywhere within an hour-and-a-half of Crediton or Exeter, I'd absolutely urge you to get down there and visit them. 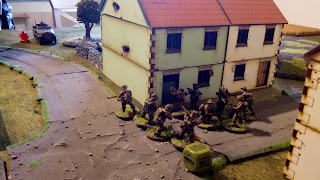 I had a fun time last weekend at Kirton Games in Crediton [link here], run by the entirely splendid Rob (once known round these parts as Col. Gravis), and there's quite a bit to report! I'll do the job in tow parts, as it happens: firstly the games; after that I'll cover the venue itself, because it's all kinds of awesome. 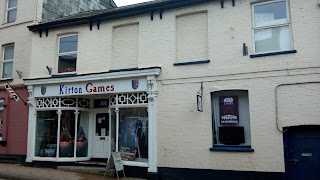 But first the games.

I got three games in (partially because there weren't too many of the regulars who could make the day, sadly) and - joy of joys! - I got to use all three of my main forces! here's the brief overview...and interestingly, the first two were even live-streamed!
Game 1: Oliver's US Vs my Late-War Heer (1200 pts)

Four objectives and a hard-fought battle. This was a real thrill from start to finish, and Oliver was an absolute gent to play against!
Like all the best Bolt Action games, fortune kept swinging from one of us to t'other: a brave opening gambit from the US Rangers found them storming a house, right into the deadly weaponry of my assault engineers who'd just nipped in first. Ouch. Still, his artillery spotter righted this by blasting the house to smithereens with HE. Double ouch!
Elsewhere, my Hanomags had fun dotting around a gunning at things, and once both of the bazooka gunners had been neutralised they had the run of the table...but it was too little too late. The second US airstrike had caused me problems (and blown up another of my units in another house!) and my right flank had all but collapsed in the face of the Veteran Americans.
In the end, the game went to a cinematic draw, with two objectives apiece and two contested. The joke was on me, because had I but thought for a split-second I could've contested a third...still, it was close. Oliver had more men still standing, but he'd lost a lot, whereas I still had three fighting halftracks with nothing that could touch them and roads to zoom around on. 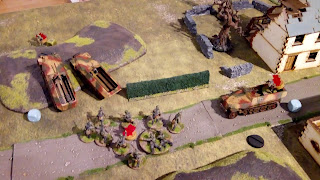 A bloody good game, and all the better thanks to my worthy opponent - his combat engineers were hands-down the best unit on the table!
Game 2: Rob's LW Germans Vs my British 4KSLI (1000 pts)

We only had time for a quick game, sadly, but I like games at this size, and Rob's always a gracious opponent - in this case with a very pretty German force. 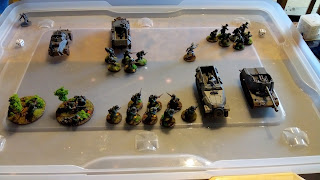 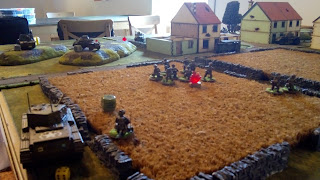 My plucky Brits did very well for themselves in this game, and I'm almost sorry to say that after a strong start by the Germans (their SdKfz.222 blew up my lorry and the PIAT team in it, the bastards!), pretty much all else went my way!
My artillery strike arrived on time, and pinned the hell out of everything, and my Cromwell CS blew up the house with Rob's biggest unit inside, whilst my infantry kept the Marder pinned out of usefulness and my faithful Staghound scooted round the back of his lines to destroy transports and vehicles alike.
We called it when the clock ran out, but the field was decidedly the British. Poor Rob had had a rough time of it, but again, he was gracious in defeat and it was a thoroughly enjoyable game: cheers, Rob! 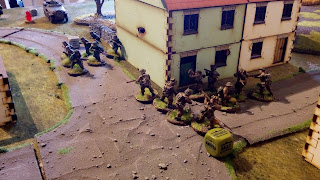 We had an hour to kill at the end of the day, so I got the chance to roll out my Desert Sikhs to fight Kenny's Japanese...and I don't remember the last time I had so funny a game, as Kenny's avowed sole tactic was to charge blindly at my lines, and the danger of this was compounded by the fact that I was defending some solid buildings as he crossed the open ground. 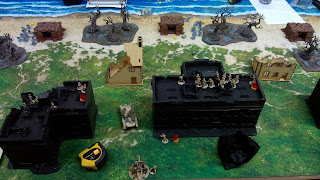 The Japanese cause was made more forlorn yet by the fact that whilst Kenny's preliminary bombardment merely shook my lines a little, mine destroyed two of his units outright (his air observer and medic) - leaving him with only six order dice and me with even more chance of cutting him down. 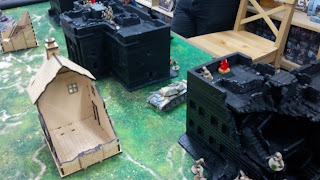 Which I did.
In droves.
Whatever they are. 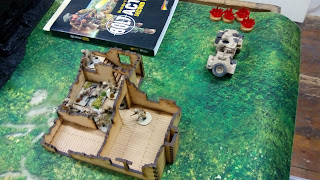 True to his word, Kenny's brave veteran Japanese charged my lines - all except the MMG, which was too pinned to be of any use before it was mortared and 25pdr'd into oblivion. Literally only one man reached my troops, and he managed to kill just one Indian soldier before meeting his ancestors. Brutal - absolutely brutal - but a real laugh.

Thank you, Kenny: keep fighting the good fight, and here's to you discovering the joy of tactical finesse, eh?

Next post, then, will be about Kirton Games itself. What a place!