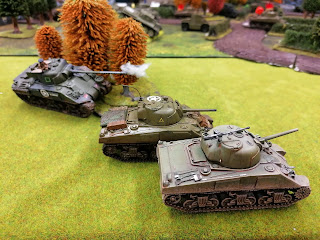 We used Bolt Action rules, with some tweaks, and had fifty - FIFTY - tanks (and a handful of other AFVs) on a table approximately 9'x5', with seven players and me games-mastering. To keep things manageable, the vehicles were organised into troops/zugs of 3-5 and these all acted on the same order die (although we interpreted this loosely as demand arose). 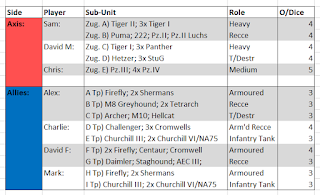 We also included randomised special skills from the Bolt Action 'Tank Wars' book, with vehicles being awarded one skill for each part of a hundred points over 199pts. 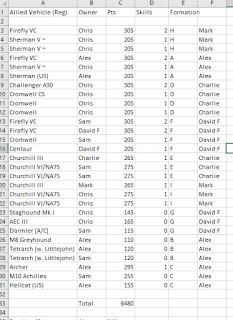 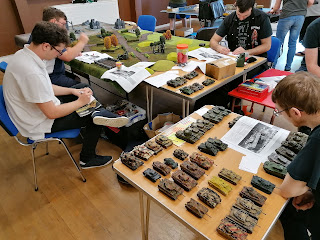 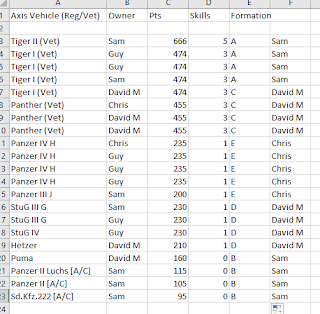 In the end, the Germans just squeaked a victory through a ridiculously cinematic Panther dash to contest the last, central objective.

It was a rather unusual, very cool-looking and very, very fun game, and I am extremely grateful to all of my pals - old and new - at the club for bringing their toys, getting stuck-in, and making it happen.

And here are the pics to prove it: 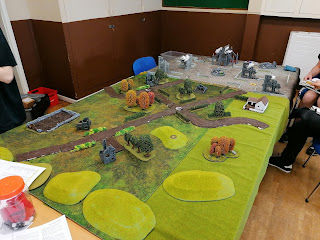 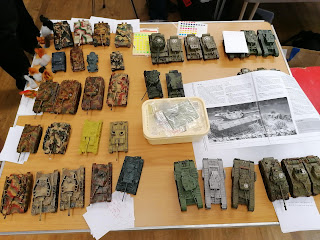 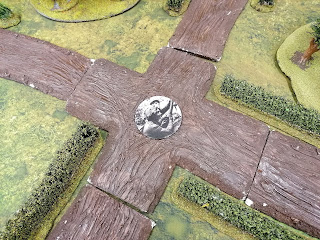 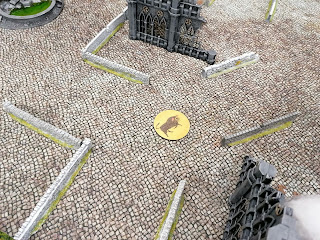 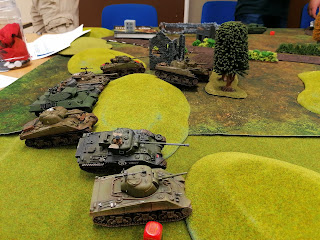 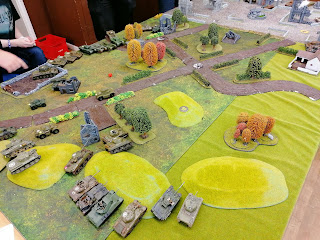 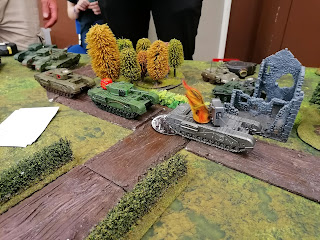 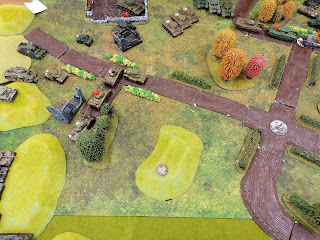 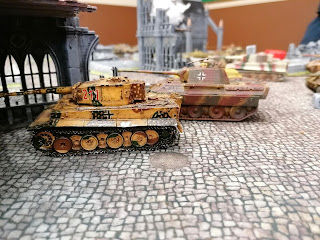 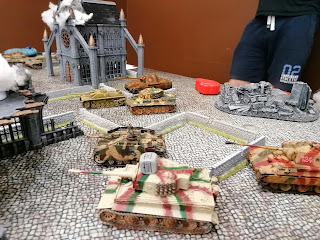 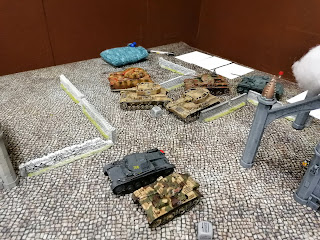 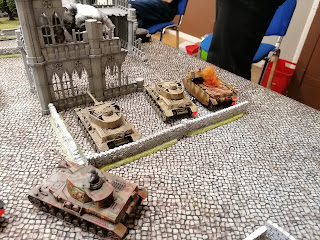 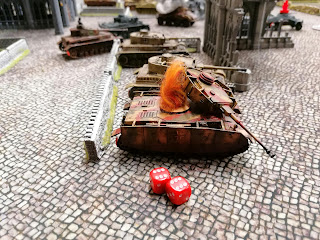 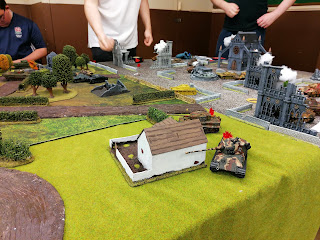 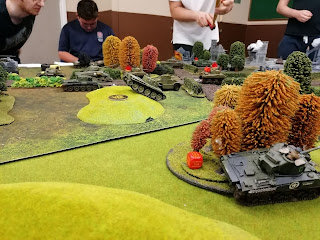 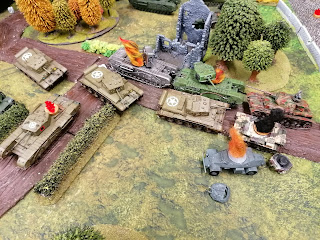 Well, the pics in this post really speak for themselves: we played a beach invasion game, and it was fun.
David and Charlie played the staunch German defenders against the attacking Brits (Fred) and US (Alex) whilst I umpired. And I'm glad I did, because this really was a sprawling chaotic quagmire of a game, with rules fudged and bent left, right and centre in order to keep the action (and the tortured narrative) moving...
AND IT WAS BRILLIANT FUN!

Yes! The Allied forces made slow progress at first as they struggled up the beach, but their numbers started to make a difference, as did their air and naval support. The Germans' pins didn't help, but honestly their most terrible foe that day was their dice: they were absolutely cursed - especially Charlie's!
In the end, the beaches were strewn with burning tanks, but enough allied troops and hardware had made it successfully ashore to start securing the beachhead. With both 88 bunkers destroyed, victory went to the Allies. 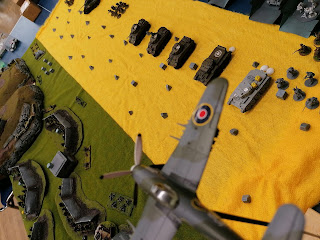 All of us had a real blast.

A special mention ought really to be made here for the stalwart work of David and Charlie, whose only job was to blow the crap out of the landing units without really getting to manoeuvre: they both did an excellent job!

How did it work?

A lot of planning. 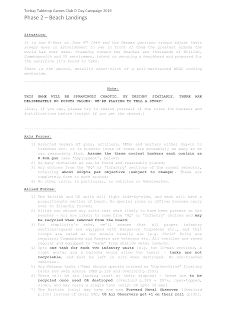 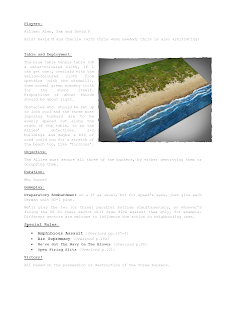 To keep things moving, the game was essentially two mutually-influencing games running side-by-side with their own dice bags. We also did away with points values, choosing instead to field the following:
As the whole 'campaign' is about playing for fun rather than playing to win, we knew this wouldn't be a problem, and of course, it wasn't: it worked fine. We also did away with the rules for landing craft, simplifying it to (1) all the landing craft we had would arrive automatically and unload before doing so again next turn (the assumption was, I guess, that we were only working with those that made it ashore); and (2) all Sherman-style tanks could 'float' ashore to represent DD versions. Yes, I know this was an almost insultingly gross abstraction, but we had a game to play.

All the sand was rough terrain, so advancing would take a long time, and each of the big bunkers on the flanks had an 88 in it in addition to all of the other medium and heavy AT guns dotted about. for simplicity's sake, all of the Germans on David's side (on the dunes, facing the Brits) were Regular, whilst those on the cliffs facing the Americans were Veterans. Ouch.

Also, to average-out the effects of the Allied bombing, all of the German units started the game with a single 'pin'.

One of our players couldn't join in, and didn't have his models with him, so we went from a 9' wide front with three objective bunkers to 6' with two (and me just umpiring) but that worked fine in the end, thankfully. 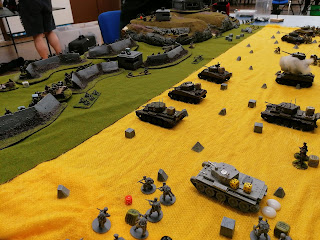 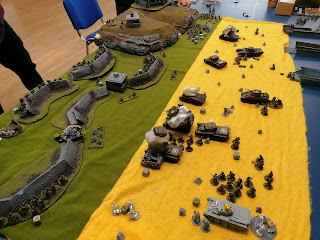 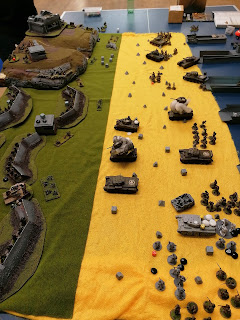 This game was really great fun, despite (because of) fudging a few rules here and there...and I would not have had it any other way! Also, I simply could not have done it at all without the help of my players from the club: thanks, All!