Lieutenant Danvers signed off the last chit. It honestly was “with regret” that he wrote, and he didn’t doubt that the four of them really had made “the supreme sacrifice”, but it still felt somehow hollow.

Getting out had been hellish. Higher command were still calling it an extraction, but it was dangerously close to a rout, and if it hadn’t been for his troopers’ training and experience, they could well have gone under. Luckily the orkish attack had blown itself out, and those beasts still lurching around the battlefield were too concerned with looting or petty squabbling to give chase. He’d never seen a fight so utterly over.

But ‘over’ it really was. Time had seemed to slow down, but Danvers had seen it with his own eyes: the Colours of the second battalion had fallen, and with them the famous Admiral Drax.

He’d met the man once – some seven years ago when The Hon. Admiral Horatio Catweazle Drax had undertaken his first review as Regimental Colonel. As the then most junior officer of the senior platoon in his battalion, it’d inevitably fallen upon Danvers to escort the Admiral through his review.

Like everyone else he was mildly baffled and professionally scornful of a naval officer taking command, but – like everyone else – he’d swiftly changed his mind. Rumour had it that Drax’s appointment had been just the latest in a spate of increasingly substantial administrative errors, but when Colonels Anson, Melville and Pulleine had retained their posts at the head of their respective battalions, it became clear that there was more to it. Danvers had no idea what Drax’s mission might have been, but the Admiral had quite obviously had a Very Good Reason for moving his flag to the Cadian 24th.
Now, after too many engagements, a great deal of hard-won victories and too little respite, the men would follow him anywhere. The name ‘Drax’ had in itself become synonymous with the Cadian 24th, and glory after glory had followed.

The Admiral had gone down fighting; of that there could be no question. By the time Danvers’ platoon had clawed their way through to the front line, B Company of the Second had been practically eradicated, but he knew what he had seen away in the centre, even as Guardsmen Denney and Hether had been ripped apart by shoota fire within arm’s reach, right in front of him. Time had slowed and hardened into clarity.

He’d seen the orgryn, Deddog, heaving up the shattered remains of a huge ork walker and unceremoniously dragging the Admiral out from beneath it, whereupon he rallied those troopers who’d rushed to his aid, shouted orders to Melville and his command squad and immediately strode forward toward the brave guardsman slumped over the comms array.
As the first of the orkish infantry had broken through past the shattered skullhammer wagon they had made to assault the command group, but the right-hand elements of the Death Korps and the last reserves of B Company’s riflemen and veterans had surged forwards and eradicated them in an unholy amount of flame and lasfire, enabling Drax, Melville and the others to reach the comms array.
Barely a minute later though, the air itself was rent apart by a vast explosion: the command leviathan of the brave Praetorians on their left flank, beyond the Krieg, had been breached. Danvers’ eyes briefly focussed through the acrid smoke on its fighting top and saw the green bodies clambering up the side – using power claws just like ice axes to reach the parapet. In that instant, the tide turned.

As the concussion of the explosion swept past him, Danvers had seen the boss’s command group get defiantly back to its feet. What a sight that had been – the Emperor Himself would have wept to see them:

Drax – of course – resplendent in his now grubby and scorched pelisse and medals over a once-white cvercoat; Col. Melville, more muted in his field dress; the Lord Commissar of the Second (whose name Danvers had never known); another commissar; the vast bulk of Nork Deddog; some veteran troopers of B Coy HQ and also, Danvers had noticed, Lt. Harmer of second platoon – a fine officer and a man with whom he’d shared both foxhole and mess. It appeared that Harmer had been the one to lead the counter-charge to protect Drax’s run forward, and now he’d thrown his own command squad into the looming melee. Power sword drawn and faithful corgi ever at his heels, Harmer was there, right at Drax’s side when the green tide hit them.

With a bloodcurdling scream, Warboss Pike-Ee’s mob descended upon Drax’s command group – literally – jumping down with from the wreck of the skullhammer. Sgt Lindley of the Veterans and one of Melville’s aides rushed to intercede, but carving a bloody arc through the air, the warboss’s power claw scythed them both in two as he swept them out of his path. He wanted Drax.

The fight was brutally one-sided, and although the bravest of defences was offered, it took less than a minute for the end to come. Still in slow motion, and even as he issued orders to his own troopers, Danvers had seen flashes of those heroic final moments: the Lord Commissar’s power fist closed – crackling – around a Nob’s throat and crushing it to nothing even as his own head had been unceremoniously stove in by an unceremonious swat of an enormous green backhand swipe; an elderly veteran plasma gunner quite literally shoving Melville out of the way and taking for himself the fatal swipe of a jagged ork choppa before the merciless backswing of the same weapon cut down deep into the colonel himself, burying itself in colonel, veteran and ground alike so that the green monster had to let go of the blade.

He saw Deddog – furious in rage at seeing the colonel prone but torn in his loyalties between the dying Melville and the Admiral – deciding that violent recrimination would be the best form of emotional outlet and picking up the offending Nob by the shoulders and slamming the hapless ork’s body and legs left and right into the rest of the green mass, the brutal impact of which laid low at least another two of Pike-Ee’s Nobs. This would doubtless have continued had Deddog not overbalanced himself and been buried – apparently dazed – under not only the body he’d been wielding but also a press of other orks.

He saw Harmer. Harmer was one of the last to fall – somehow parrying blows aimed at both him and Drax, and hacking away with his clumsy old power sword in one hand and the torn colours grasped in the other. Danvers missed the detail of what happened next to Harmer’s in the melee, but very soon thereafter he saw the man lifted up and punched clear up into the air, and to his relief Danvers had realised from the rag-doll movement as he arced down that Harmer was killed by the fell blow of whatever it was had sent him flying. Danvers had noted with a morbid satisfaction that, still grasped in Harmer’s left hand but now torn from the shaft and in part wrapped round the lieutenant’s own shoulders, had been the colours. Protected even unto death.

And then there was Drax. Never had Danvers seen such calm, unflappable dignity in death. Now pattered with gore and grease and viscera, Drax had stood with the apparent poise of one on the parade ground and yet had somehow still moved with astonishing grace and precision. He was not a big man, nor was he prone to flashy great weapons, but Drax deftly parried, countered and riposted blow after blow after blow from Nobs and Pike-Ee alike…until – with the eventual death of Harmer – a low-life grot had snuck in behind the Admiral and shivved him with some crude, ugly coarse blade – up, under the rear-plate of his cuirass and into what must have been his spinal column.

It was over.
Danvers couldn’t see his face, but he saw the great man go rigid. The thug Pike-Ee barely seemed to register the change, but the half-second pause was enough. Pike-Ee’s next blow felled Drax, and then it was butchery. They fell upon him like carrion beasts and within seconds the Admiral’s body and anything of his which could possibly be considered a ‘trophy’ was ripped apart, ripped off and gone.
ooOoo

Danvers had done very well. His small armoured fist platoon had, on its arrival, secured for the Emperor the remains and machine spirits of two great engines of war, and he knew he’d done the Emperor great service, but he could take no satisfaction in his own small victory having seen the wholesale destruction of the second battalion and its brave men and commanders.

Within minutes of seeing off the last of the weakening ork attacks in his section, Danvers and his men had been recalled. Their line of withdrawal didn’t take them any closer to the scene of Drax’s last stand, and besides, there was such a press of corpses and debris that by that time that looking would have been pointless, but Danvers was gratified by one particular detail he noticed as his driver painstakingly reversed:

Nork Deddog – apparently having dragged himself out of the detritus was slowly, sullenly, trudging back through the lines. Held with his right hand in front of him, and transfixing him almost like some cheap talisman might transfix a child, was Drax’s broad, star-shaped Honorifica Imperialis – miraculously unscathed and unlooted. Cradled tenderly in the crook of Nork’s left elbow was the one other survivor: battered and bloodied, masterless and grieving but with all four legs still working and a new-found ally in the gigantic ogryn, was After The War.

Danvers slid the three faceless chits across to his weary adjutant and allowed himself the briefest of moments. Then, with a sigh, he stood up, picked up his cap, squared his shoulders and started off. Orders Group was starting in precisely three minutes, and he would have a job to do. For the Emperor.
Posted by Admiral Drax at 23:59 9 comments:

...and now they're up for auction via tabletopbattle.com, to raise funds for veterans' charties. 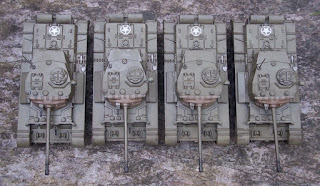 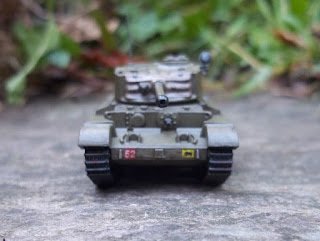 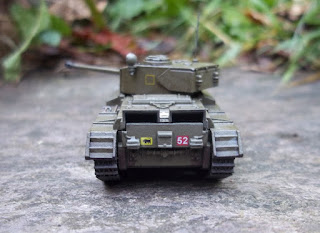 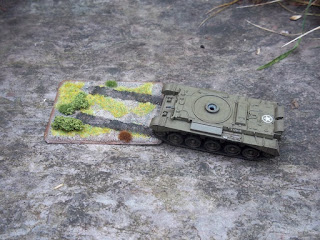 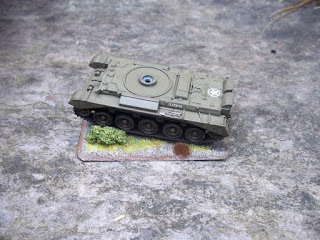 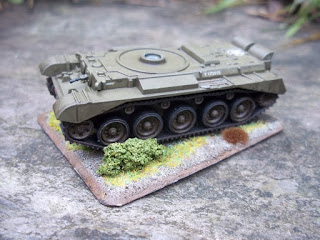 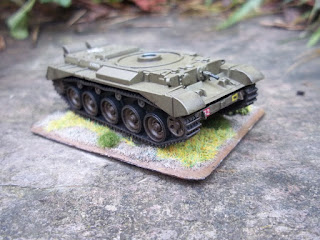 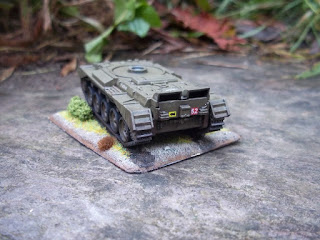 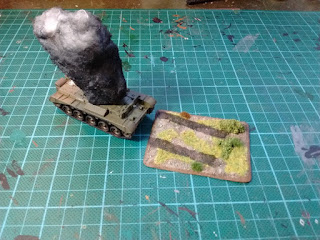 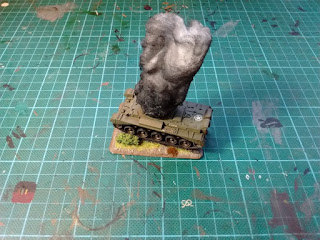 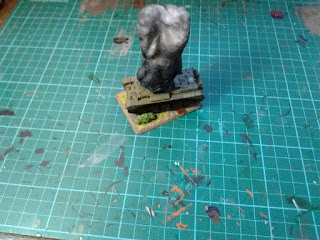 Busy back at work, but yes, I have been painting. Still ploughing through these Comets for the tabletopbattle.com charity auction. I've about a week left to finish them and ship 'em to Norway.

1) I'm back to work. Boo!
2) I managed some painting again last week - hooray! - more incremental progress on Da Masta Cheef's orks (which are slow-going for two reasons: 1) I had completely run out of dark brown paint, so I had to order some more, and 2) they're really surprisingly fiddly models, and yet there's a real paucity of detail in the recesses...).
3) No pics. I'm too tired. You'll just have to trust me.