Hullo, All.
[N.B. The copy in this post is orange and blocky and looks really weird because...well, because Blogger evidently hates me.]

Still taking advantage of Bath Youth Hostel's bandwidth, what follows is the now delightfully obsolete first look at my 28mm Bolt Action core platoon. I say 'now obsolete', because since taking these photos a fortnight ago I have now completely finished (and based) all of the following:
Allow me to recap. ALL of these units are now completely finished - ALL OF THEM - a hitherto unknown and unbelievably swift rate of painting for your erstwhile humble author...
But THESE are the only ones of which I have photos. So here you are. CAVEAT: As ever, the photos don't do the models justice, and - in case you're unfamiliar with Bolt Action minis - the figures are understandably hunched over...not standing up, bulletproof like my poor ol' Guardsmen (but more about them anon...). 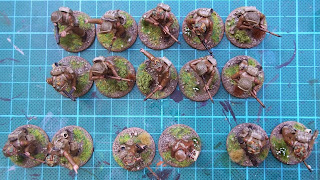 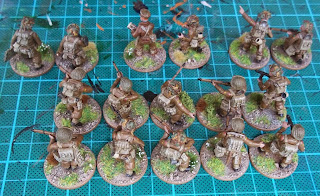 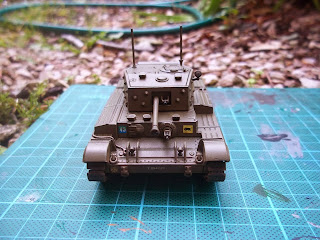 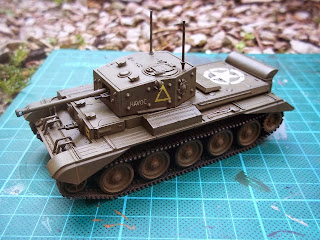 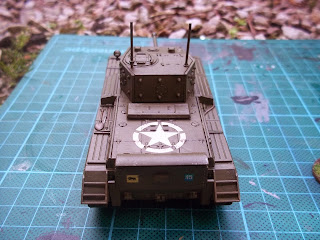 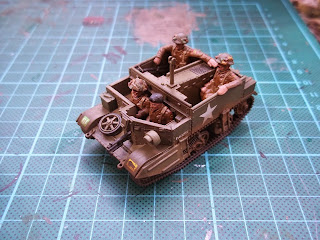 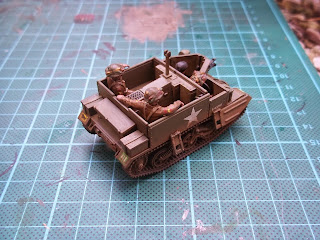 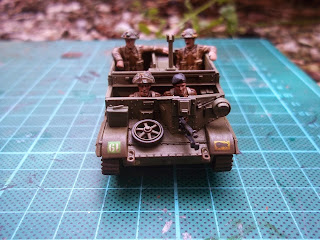 I'm delighted to note that I will actually get to play my first proper game of Bolt Action this weekend, at Gravis's store, Kirton Games (see Curious Constructs link, above), and after that, painting will low down as I take up my workload as an examiner...but there will still be posts, I promise!

PS: With luck and a following wind I'll be able to take some proper pics soon...
Posted by Admiral Drax at 22:40 22 comments:

I'm on holiday, in a very well-appointed youth hostel in Bath(!) and as the internet access is better than at home(!!) and I'm babysitting two very-excitable-and-thankfully-now-very-asleep girls whilst my wife explores the city, I thought I'd blog a bit.

Well, after randomly generating a winner of my somewhat-lacklustre golden opportunity to win the chance to get one of your units painted by me, the 'lucky' winner is... 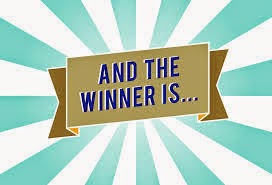 Congratulations, Cheef! Check out his blog here: link and marvel at his characterful creations (Turns out that I don't visit nearly enough: I've realised that his is one of those blogs that has mysteriously dropped from my blogroll. Bugger. To be amended.)

Do please drop me an email, mate...

More to follow - I'll see if I can cue-up one or two, because there are exciting hobby times ahead for Drax...

Thanks for playing along at home,

And I'm going to give it another go.

Many thanks, by the way, for your kind comments on my last post! I shall be randomly selecting a 'winner' soon, so do please watch this space.

Yes, the 6MMRPC has returned (see link, here) and despite my work as an examiner being about to start imminently, I intend to have a good crack at this. We'll see, eh?

The details have been tweaked a bit - what follows is lifted wholesale from The Spiderweb of History (see link, above): We've changed up the time frame - it's going to run from June 1, 2015 thru November 30, 2015.  This avoids Christmas.  There have also been a few rules changes, and some exciting additions IN BOLD.
1. No purchasing of new miniatures, EXCEPT if you use a joker.  You get three jokers to use on a figure purchase.  Could be a blister pack, an ebay bundle, or a single figure...you can't splurge. The only exception to this rule is if you need bitz or A FIGURE (Singular) to complete a unit/warband etc.1.1 - There is an opportunity to "earn" additional jokers.  If you complete an entire project (whole unit/army/warband etc.) with pictures of starting, WIP, and completion, you earn yourself a Joker. 2.  Gifts do not count against you. Holidays, birthdays etc. Also, if you're given gift cards by your hobby illiterate family or friends, you can without penalty use them on anything you want miniatures wise.3.  Paints, terrain (or materials), and other hobby supplies do not apply to the no purchasing rule.4.  At least one hobby related blog post and/or Instagram update a week.  If you instagram, be sure to hashtag your pic with #6MMRPC5.  Zombtober will be part of the 6 month challenge so, Zombie related stuff during October is ENCOURAGED. Other theme suggestions are welcomed.6.  Anyone that wants to submit a before and after picture of a miniature that they are proud of completing during the course of the challenge to dmcffd@gmail.com will be entered into the running for a gift certificate to a online wargaming store of their choice.  Judging will be by an un-biased person.  Amount on the gift certificate will be dictated by winners nationality but should work out to about $30 U.S. I (Spiderweb of History) will not be eligible to win.

So spread the word folks, and lets make this an even better challenge than the last!
Cheers,

Email ThisBlogThis!Share to TwitterShare to FacebookShare to Pinterest
Labels: 6MMRPC

"Why Am I Here?" was the title of my first post, seven years and four days ago, and it seems apt to bring it back for today.

I've got a whole raft of things I want to say and do in this post, but that'd get silly, so I'm going to limit myself here to three significant things, and then use the rest as content over the coming couple of weeks. The three things are as follows:


Firstly, then: the competition.

Actually, it's not a competition so much as a draw, and it's really simple (because I've little to offer as a prize): please leave a comment at the end of this post, and if you'd like to be in with the chance of randomly being picked as a winner, then just mention it. I won't take offence if you don't! The prize is as follows:

I will paint up a unit for you - free of charge - and cover the postage too, as best I can. You know that unit that you really cannot be bothered to paint? I'll do it. You know those models that you need to be finished at some point but they're right at the bottom of your priority list? Send 'em to me. The caveats are: (1) I'm not brilliant at painting - I'll do a serviceable job, but it's not pro-quality, and (2) it'll take me a while. I promise I'll give it my best shot, though...

There you go! Free painting for one unit. Not a bad prize, if you just need stuff painted!

Next, a brief look back at previous centenary posts: 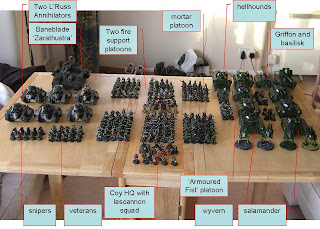 This was the first group shot of the glorious 2/24th Cadian. Ah, glory days indeed! This was almost a year after starting the blog and about seven months after moving from Norwich to sunny Devon. 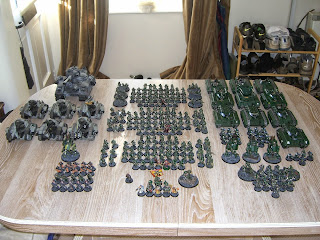 By this point, we'd had the first addition to our family - our eldest daughter - but I still managed to describe the 2/24th as "my pride and joy!" Incidentally, this shoot is the one my current blog header comes from! 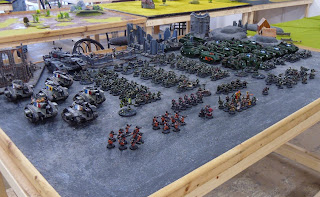 In June 2012 I was lucky enough to be frequenting the now-defunct Giant's Lair in Plymouth: the only time in my almost 25 years of wargaming that I've been able to play regularly. By the way, if you weren't around during this period, I recommend checking out this post: there are some cracking pics! I really like this one: 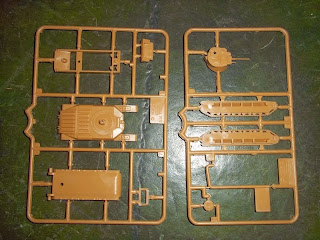 Wow - this is truly mundane! I did genuinely enjoy bashing out fourteen posts over the course of a fortnight though: it was a fun (and very popular) challenge, the 'Forced Fortnight' - it also got me to plough through a lot of hobby work. By this time, I'd had another child (Daughter #2, the tubby ginger one) and I'd taken a demotion at work, to give me more family time. Great decision!

The sprue, by the way, is from my Matilda II, which I've yet to paint properly...it's waiting in the wings, trust me. I've got plans for it. This is symbolic, really, of my move away from 40K and towards historical - in this case, Bolt Action in 15mm.

That leads me, as it happens, to where I am now: I now have my core force assembled in 28mm Bolt Action...and there's more on the way! Here's a pic of my core, legal 'reinforced platoon' - with luck I'll have about 1000pts' worth by the end of the month when I nip up to Kirton Games for my inaugural Bolt Action games!
There'll be far more posts about these puppies over the coming weeks, trust me!

I think it's time for me to quit 40K. I've not played with my army for literally over a year...and even then I had to dust them off. It was an absolutely blinding game against Gravis, but it was a last hurrah under the old Codex, and before GW went properly, finally batshit crazy.

I've played 40K since - I played Zzzzzz-style, chez Zzzzzz, and it was a thoroughly enjoyable game, but I didn't need 4500pts' worth of Guard to play it - in fact, I didn't even use a single one of my models. And still had a blast.

Now, I love my army, but they take up room...and I not only haven't kept up with the pace of change in 40K (I can't afford to!) I've also realised, on a fundamental level, that I don't want to. I just don't want to play their games any more. Literally AND figuratively. I strongly dislike the recent shifts in aesthetic, and I don't even like where they've taken the fluff these days: something GW's always done well. No. Alas, there's simply no part of the GW hobby that still attracts me.

So I'm left with a sprawling, painted, uniform, outdated, archaic Cadian Imperial Guard army that hasn't even been reworked for the current codex. I will probably have to sell it, and I cannot imagine for a second that I'll get a good price for it. I also have the issue of the couple of units I'd wish to keep...just for the memories, y'know...but I suspect this is all a post for another day.

Anyone want to buy a Guard Army? One very careful and loving owner...

Sorry if this feels like a betrayal to any of my few remaining 40K readers, but it doesn't mean I'm going to stop enjoying your posts (assuming the internet is functioning well enough for me to enjoy them...!)