Wow! Somehow, I'm three weeks late with this one, but here's the OTHER of the parallel games we played to represent the nighttime landings in the early hours of D-Day, 1944.

I believe it's called 'Skirmish in the Dark' (again, from the new Campaign: Overlord' supplement) and it is the kind of game that I absolutely adore: in other words, it was small-scale and very very randomised in terms of what units appeared, when and where, to represent scattered patrols of echelon Germans desperately scouring the French countryside for even more scattered fragments of US Paratroopers from the 82nd and 101st.
Simply, on a 4x4 table, the US player starts with a group of 5 Paras, and the German has a normal patrol of Heer. From that point on, tow units enter from a random edge each turn, and the players roll to see whether they're US or German...before rolling to see who it is, from a wandering medical team to a lost mortar to a bazooka [useless in this game!] to a squad of brave Fallshirmjager or cowardly Osttruppen.
As it happened, I was very lucky with my rolls, whilst my opponent, Charlie was not. Mostly, this manifested in way more US troops arriving than Germans, and then it just became a matter of whittling them down.
Pleasingly, no-one shot at the medics from either side.
Even more pleasingly, an unlikely series of enjoyably lucky rolls on turn one resulted in none other than Capt. Richard Winters rocking up out of the darkness! Whilst a few more rifles might have been useful, and he spent most of the game just watching from the middle (let us charitably call it staying a tactical bound behind', at the end, when needed, he ordered four units at once to converge on the last remaining pockets of Heer troops in the area and send them packing.

Another enjoyable random feature was the night-fighting. Every turn a powerful flare might go up and turn the night briefly into day, so it was really risky to move out into the open.
HUUUUGE thanks to Charlie who set up a beautiful table and was - as always - a thoroughly sporting foe: even when the chips were down, he enjoyed telling the story!

Last week the local club's approach to a D-Day Mini-Campaign kicked off, with two parallel battles taking place in the early hours of June 6th 1944. This post records the first of them, played by Alex and Sam... 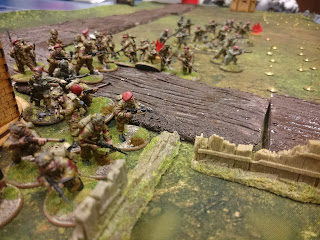 Assault on the Merville Battery

Under the staunch leadership of Lt Col Otway, Alex's men of the British 9th Parachute Bn had edged toward the battery perimeter, and Capt Greenway's men had cleared paths through most of the mines, but the battalion had lost way too many of their men and equipment in the landings...

So, under-equipped and perilously undermanned, Otway decided to forgo the last few yards of breaching, and instead headed round the flank to attack from the road entrance!
This was a departure from the historical battle, but there were some similarities, like - for example - the prompt destruction of the perimeter machinegun nests.
The Paras made great progress up the road (and clearing the buildings) at first, but then, when the inexperienced defenders started to make sense of the dim shapes flitting through the darkness, their fire started to whittle the Brits down.
Ne'er disheartened, the Paras stoically fought on and into the gateway to the battery, overwhelming those squads who'd rushed out to meed them. 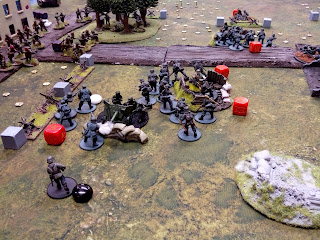 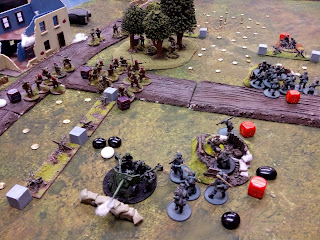 And then, just as they were nearing the gun in the first casemate, all resistance crumbled. As a couple of the remaining perimeter teams fled back through their lines, the stunned men of 1st Bty, Artillery Regiment 1716 and 716th Static Infantry Div put down their arms, put up their hands, and shuffled forward in the dark.

Otway's men were relieved, to say the least: casualties had been high, but at least the Old Man hadn't made them attack through the fence and minefield. Also, having lost their explosives in the landing, they now had a little more time to work out how to destroy or disable the guns...which it turned out were not the 150mm guns they'd been briefed on, but instead some old Czech 100mm howitzers.

Still, at least that was one battery which now wouldn't be able to engage the men on the beaches!

By 0530, and under attack now from another German battery, the 9th Bn moved off toward their next objective: Sallenelles.

Hearty thanks go out to Alex, Sam and Charlie, without whom none of this would have been thinkable, and Guy, for the loan of guns and scenery. Some of these pics are courtesy of Alex, and Sam and Charlie did a truly MASTERFUL job of setting out the scenery.

The next post will be Phase 1b: the US 82nd and 101st Airborne randomly scrapping their way through the darkness of rural Normandy... Watch this space!