Thanks for your lovely comments recently folks!

Here's just some proof that I have not neglected my Flames of War toys. It's almost impossible to see or believe, but these are actually now base-coated: 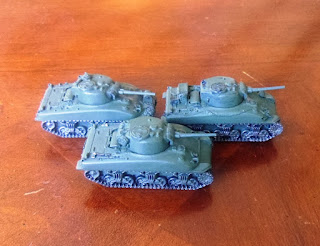 They're the three 'freebies' from the old Open Fire set, and I hope to finish them within a week or so. I've also been working on finishing off my first rifle platoon. Same end point for that too I think...

Remember that slightly shirty letter of complaint I emailed (it's worth a read)? Well, a GW Customer Services representative has been kind enough to reply...and I'm impressed. Here it is:


Thank you for email and apologies for the length of time it has taken to respond to you.

Even though the release of the new 40,000 Rule book was a huge success, we have been receiving feedback regarding issues experienced by our customers. The main one being that the information for the pre-order delivery dates was unclear. All this feedback has been passed on to our web team in order to update and prepare for future pre-orders.

Games Workshop made the decision earlier last year to change the despatch date of White Dwarf and pre-orders so they now fall in line with all the new releases. This decision was made so we could protect new releases and avoid any leaking of information that would ruin the excitement for our hobbyists. As soon as White Dwarf is released, you can Advance Order any of the New Releases, or you can buy them from your local Hobby Centre just one week later. That’s just one week from the time you find out about a New Release to being able to own it and use it in your games which, we think you’ll agree, is much more exciting than having to wait several months to get hold of it!

Not only that, but if ever you buy a product that is replaced by a New Release, providing the product you bought is still unopened and in its original packaging, we’ll happily exchange it in any of our Hobby Centres.

However we fully understand your frustration regarding this and acknowledge that this information was not made clear on the website. As a gesture as an apology we would like to offer you £15 worth of Games Workshop vouchers. These can either be in virtual form to use on the website or in paper form to use in one of our stores.

Once again apologies for the confusion caused and if you have any further queries please get in touch.

So there we go. It pays, sometimes, to make an articulate point, I think!

323 Drax at Something of an Impasse

Hullo, Folks.
[For the shorter, less rambling version, skip to the bold type at the end]

I'm a bit confused. As a teacher, I'm about to go on my summer holidays - six weeks of trying to persuade Mrs. Drax to let me have some time to my hobby - and work's eased off enough for a while that I've had time to tinker. But there's the thing: I don't know what to tinker with,

I'm really looking forward to doing more Flames of War stuff, but the colours and the scale are such that I need daylight for painting that (hence the lack of progress recently). That's a project for sunny afternoons whilst Mrs. Drax is napping.


Hmm. I dunno. I can't enthuse about the Guard at the moment. It's not burn-out, but I need a bit of motivation.

I have a manticore that needs painting and a half-built (badly-built and rescued via a cheap ebay) armoured sentinel...but I've no burning desire for either.

The obvious choice would of course be for me to buy a valkyrie, which I rekon would be fun to build...but then I'd be just another Guard player with a mediocre flyer...and yet another 40K player with a flyer at skirmish level.
I really like the general look of sixth edition, but it really feels as if life's got disproportionately trickier for mundane Guard like mine. I love that the game's swinging toward narrative gaming, and I'm absolutely fine with things like allies - I just hope my lot can still get in a decent game without being trounced every time. I was hoping for something nice for Guard gaming-wise: the wind just seems to have been taken out of my sails a little.

Oh, I dunnno.
If you're still reading (thank you!), here's a question for you:

Do you have any suggestions, please, for IG stuff that I can build, paint or (better yet) convert?
All ideas gratefully received... 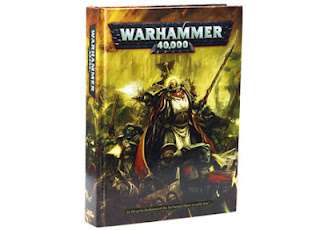