434 - Trucks, Halftracks and Other Impressive Things Afoot in the Blogosphere...

There are so many exciting things happening at the moment - especially with the new Guard Codex - that I felt I just had to share some of them with you. I hope you'll indulge some of these links, as they're worth it!

Firstly, THESE are starting to appear - thank the Emperor:﻿
﻿  - Above is the version spotted by Tabletop Fix at Salute - it's by Zinge Industries [link] - and I'm pleased to note that we've already seen pics of a halftrack one currently being worked on by the very talented Karitas (please check it out): 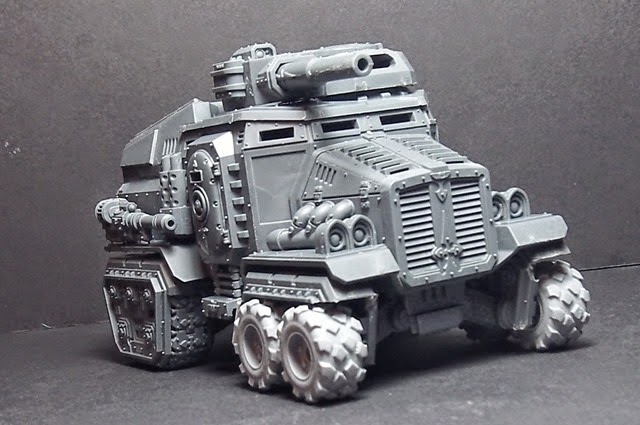 This is just about the only thing that could possibly entreat me to buy this truck. Boy, it really does look better with wheels!

Secondly, there was a very interesting debate yesterday on Faeit 212 about the nuts and bolts of the Wyvern's shooting mechanic - in particular the prolonged awkwardness of shooting a battery of three vehicles at once, following the 'Rules As Written' approach.

It really is terribly convoluted and complicated. 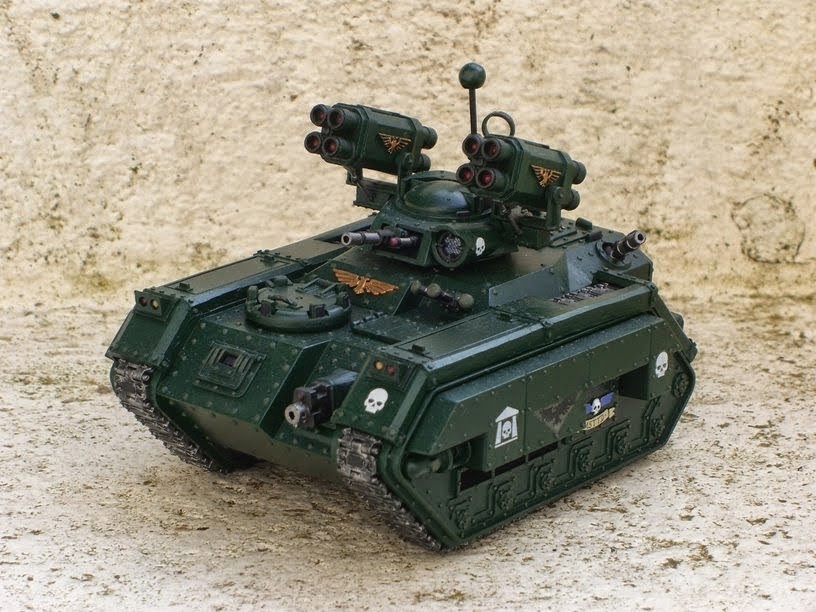 The Faeit 212 discussion is worth a read [here], but the (mostly accurate) nitty-gritty is discussed in a far more straightforward way on Pins of War [here]. It's absolute bloody lunacy.
Fnally, please allow me to publically thank Karitas and Courtney H for yesterday - they know why(!) - and Zzzzzz for his centaurrific generosity. It's things like these and people like these that keep me coming back, y'know?

UPDATE! [22/04/14] I've now added some slightly higher quality pics, having found the camera again. Please find them appended to my original post, below...

I've lost the camera, but I thought I'd share what's on the desk at the moment (besides my beret stormies, of course [link]). Sorry for the painfully poor quality pics.

First up, I've dug out my old, old Nork Deddog conversion. Ignoring the old base paintwork, that head is terrible, but I like the model: 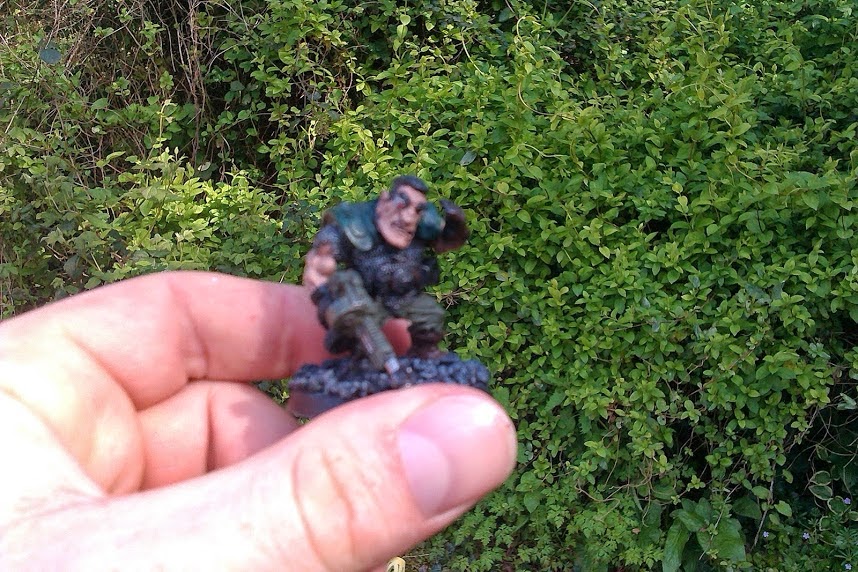 And secondly, here's the first of my two centaurs (again, very much W-i-P) artillery tractors for a brace of arty pieces sent by Zzzzzz. It looks far better in the flesh, trust me! 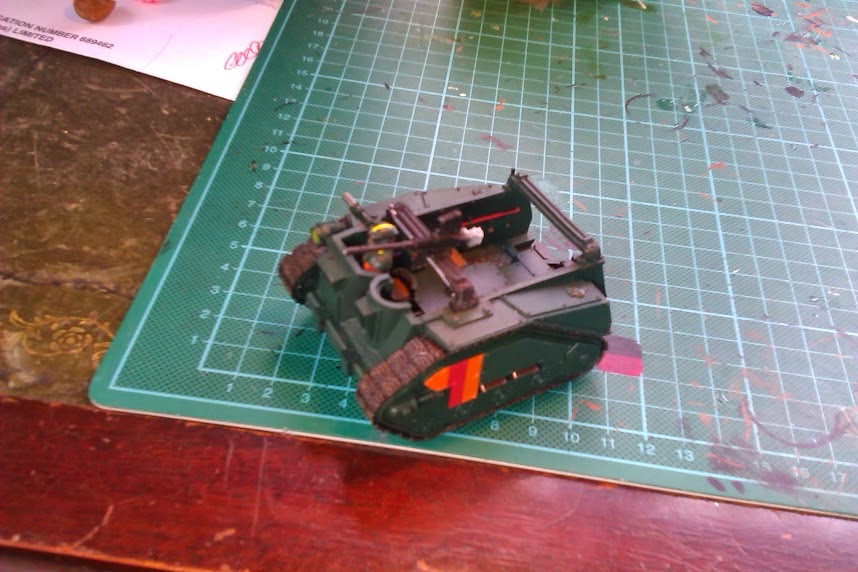 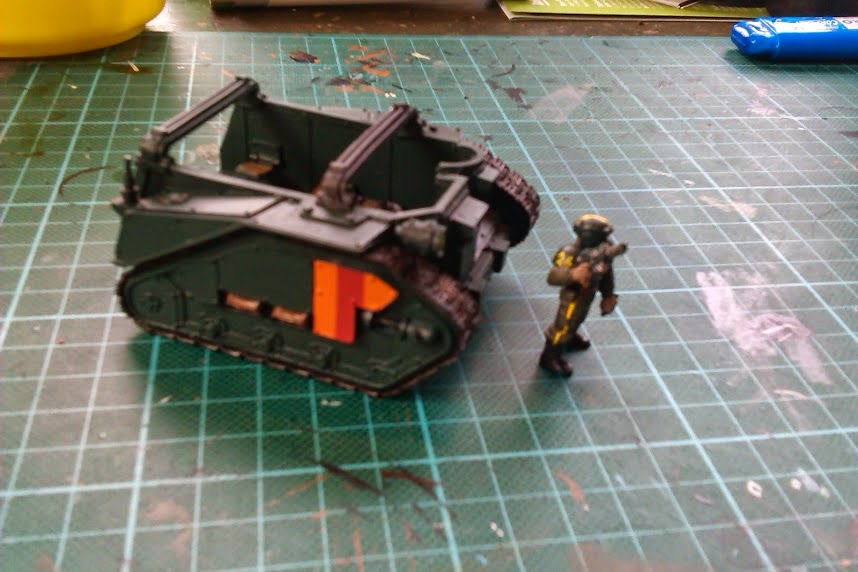 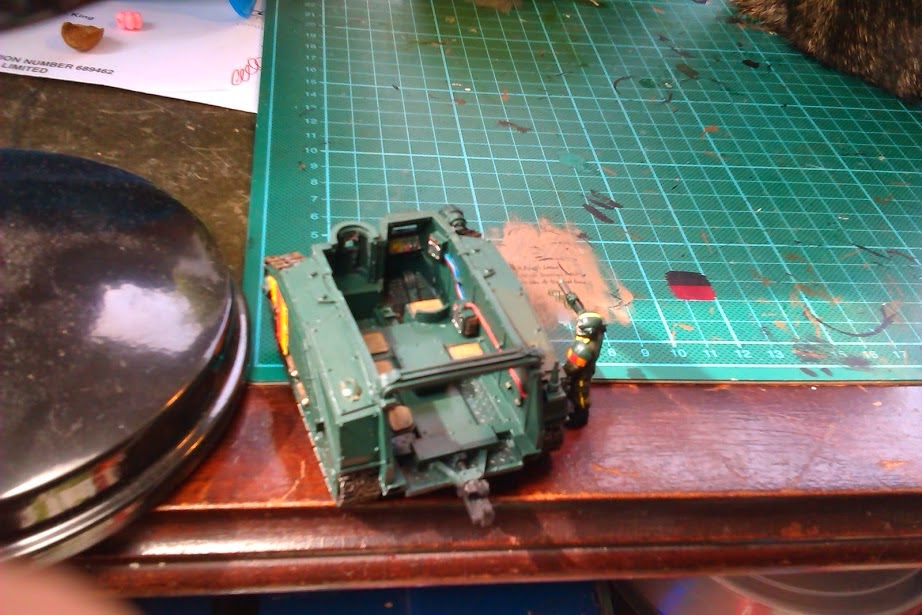 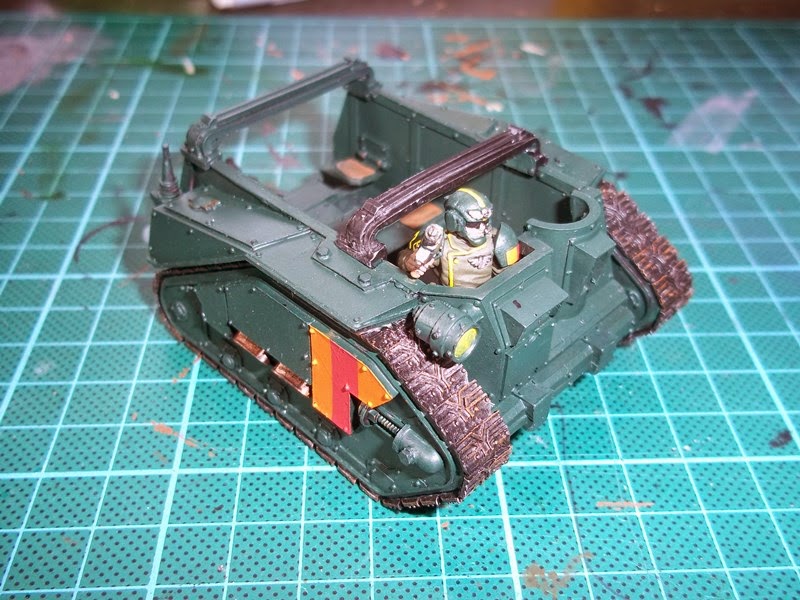 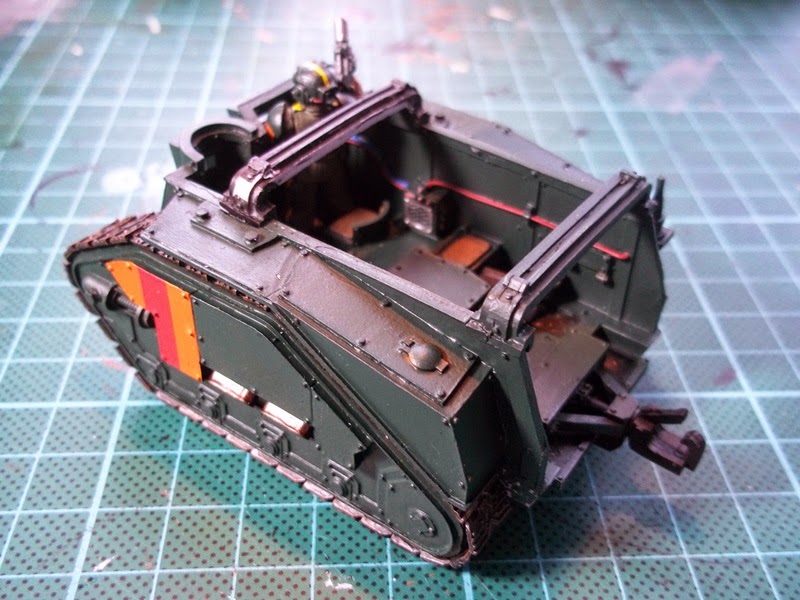 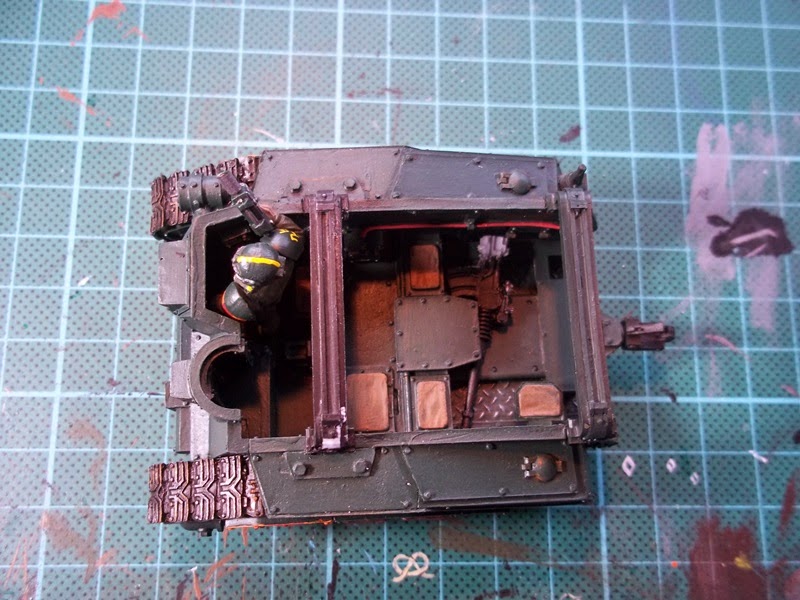 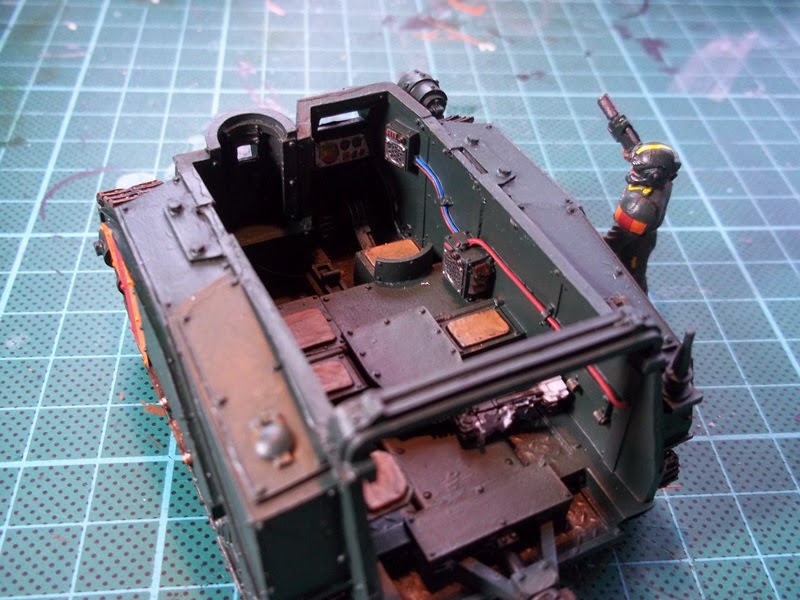 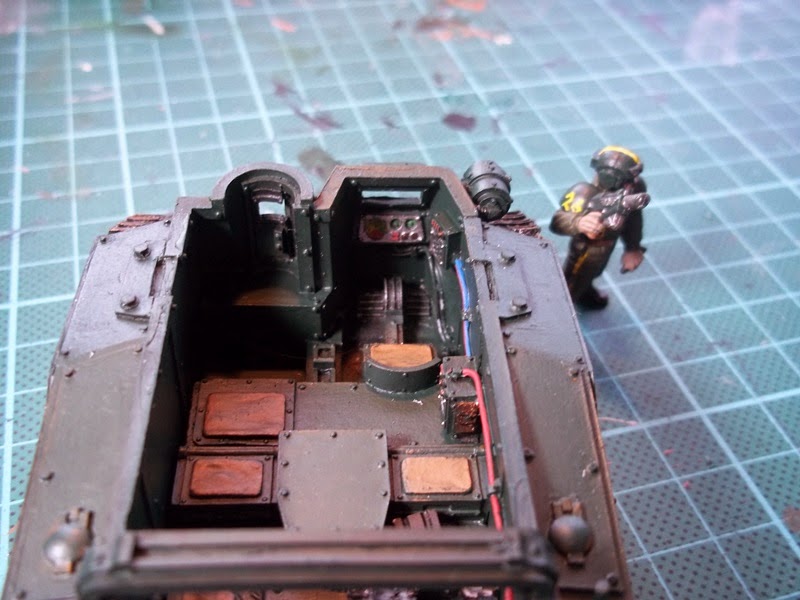 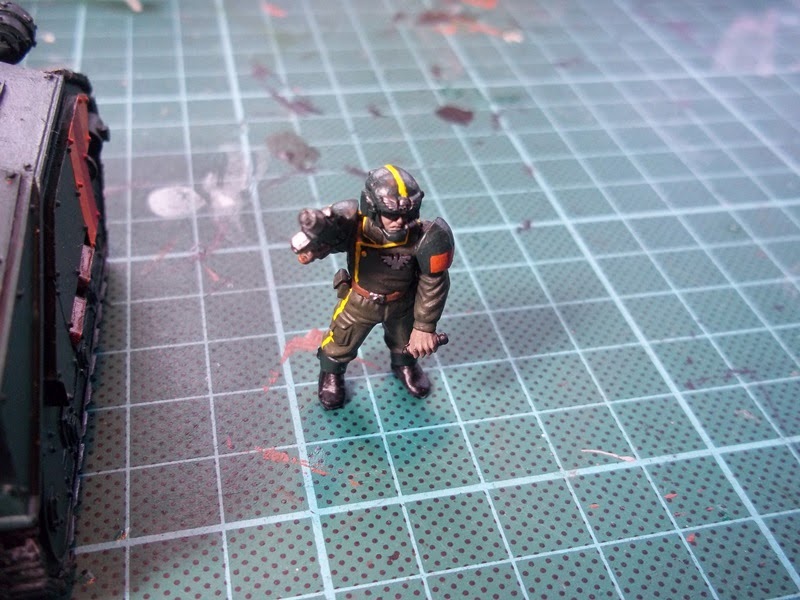 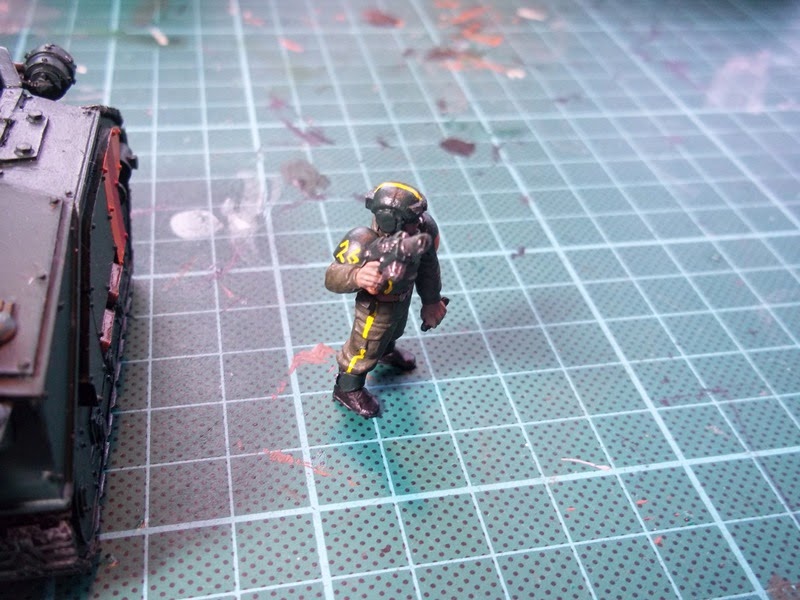 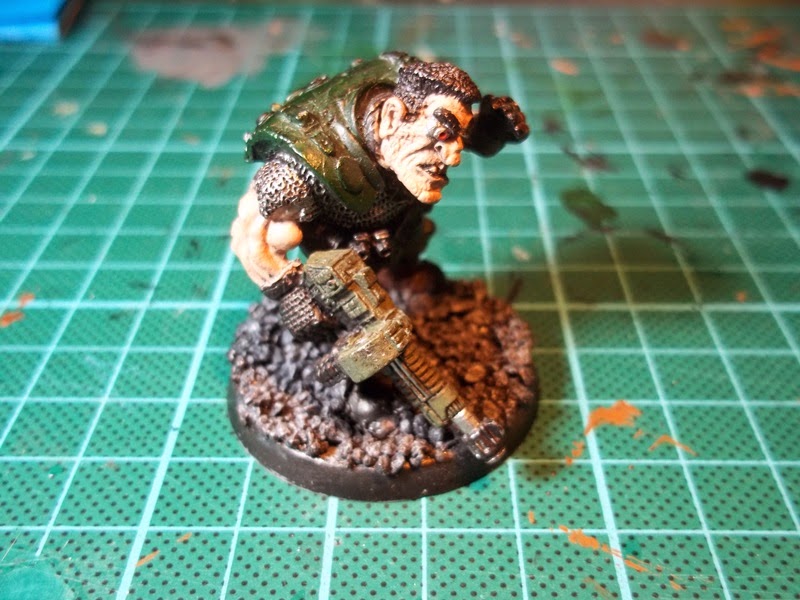 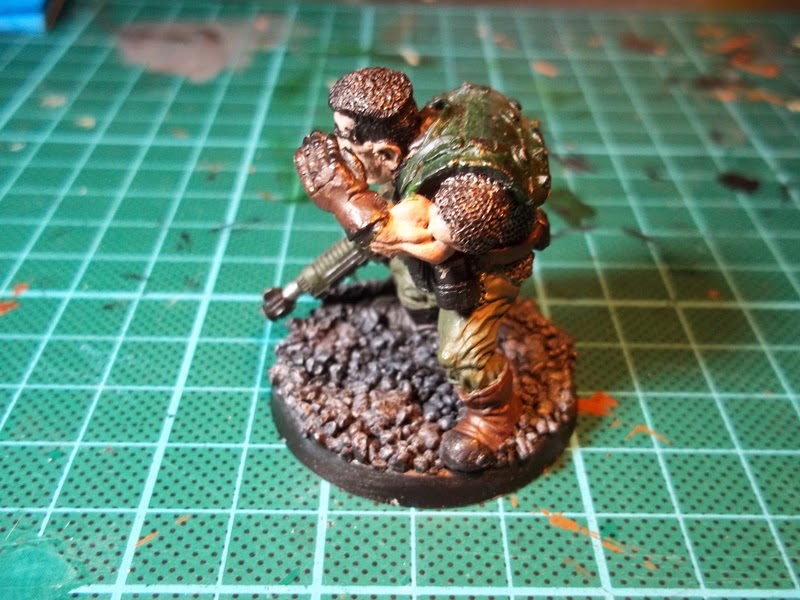 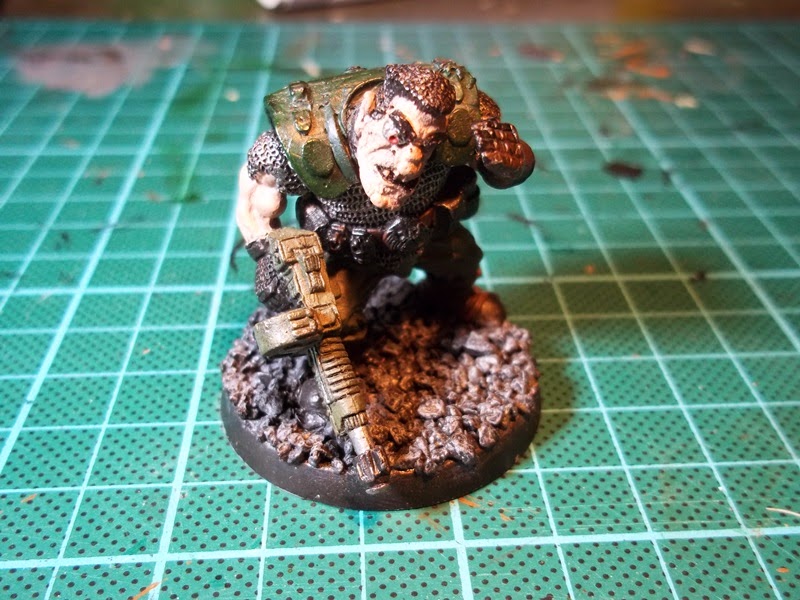 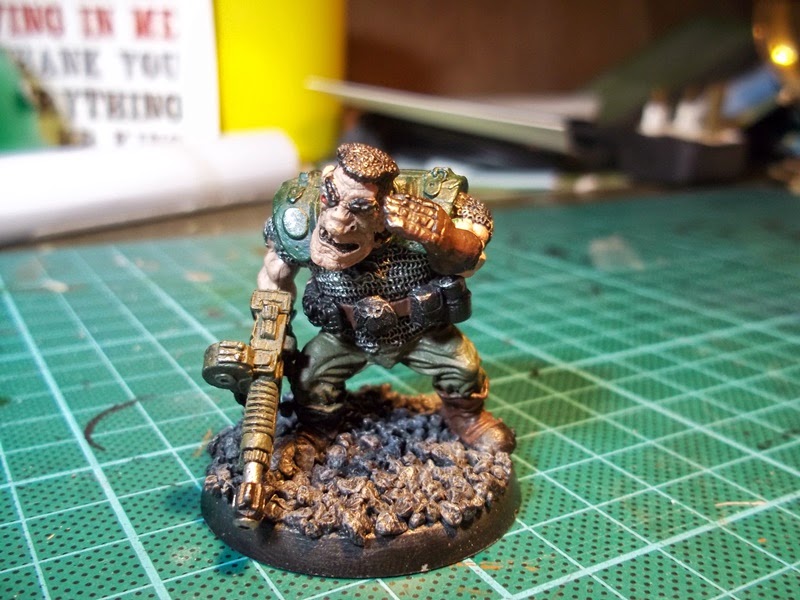 432 - TIme for Some StormTrooperTempestusScions, Methinks!

Alright then, I'll admit it: I do quite like the new Stormtrooper Scion rules.

What this means - essentially - is that I think it's time, at last, for me to finally put together that Stormtrooper platoon I always intended to. Yes, they're expensive to field, and yes, I may have to do a wee bit more conversions for weapons etc., but...

...we're getting the band back together.

Earlier tonight I delved into the (increasingly dilapidated) shed and dug out the remaining 28 beret-style stormies I've accumulated over the years:
They will of course join these guys:

And, in addition to the handful of Kasrkin I have (lovely lovely models), I also found this squad of bulkytroopers: 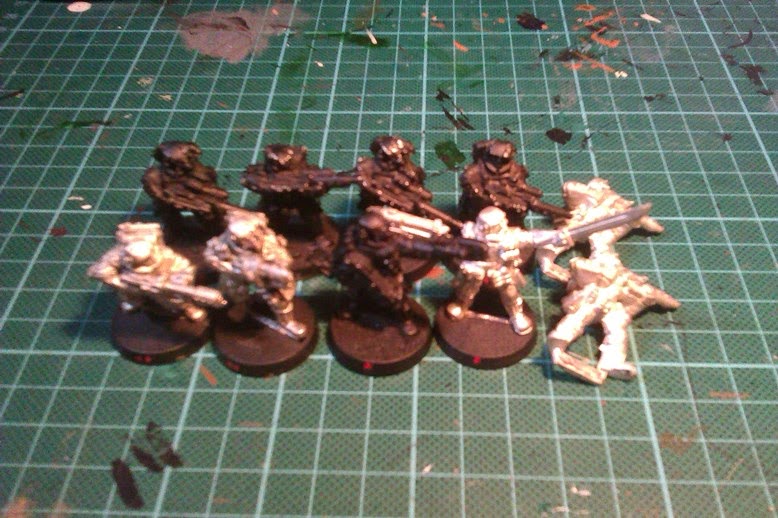 The only real problem I have is that the faces of these beret troopers are at best flat, and at worst almost utterly devoid of detail. Luckily, I have a plan. And it involves Mad Robot Miniatures...but more on them when this project kicks off!

Until next time then...

Well now, an interesting and evidently fairly contentious read. Here are my thoughts on the new Codex: IG, but please bear in mind that although many online commentators have thought  already about how to get the most fighty lists out of certain combinations of units and characters etc., my reflections are purely from a Draxian perspective.

In no particular order then - feel free to respond by numbers if you've anything to add:
Thoughts, Ladies and Gents? 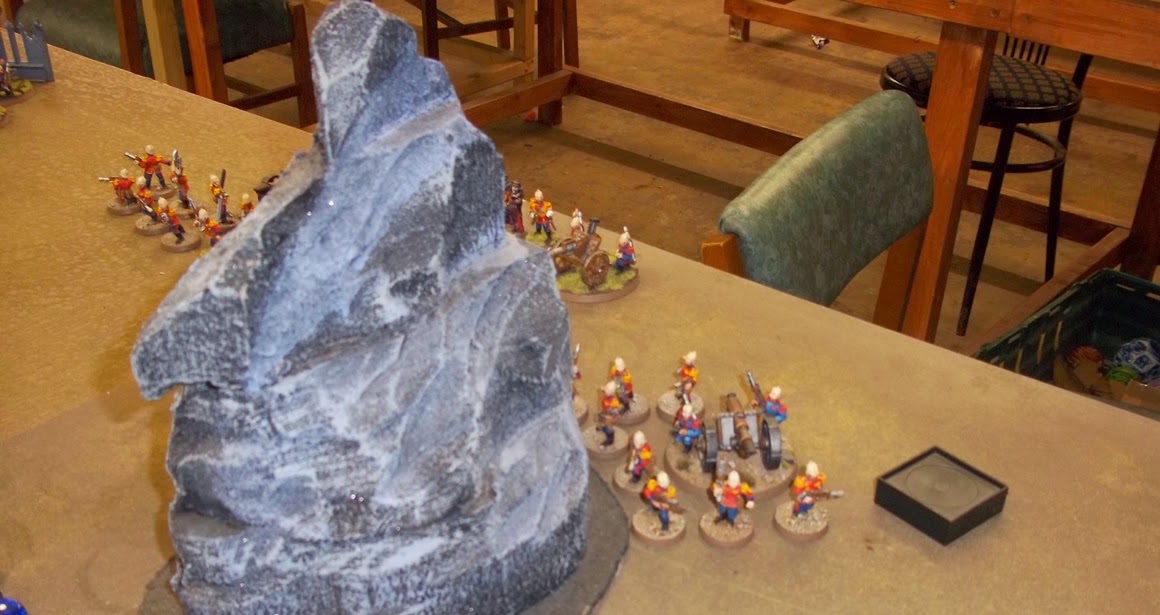 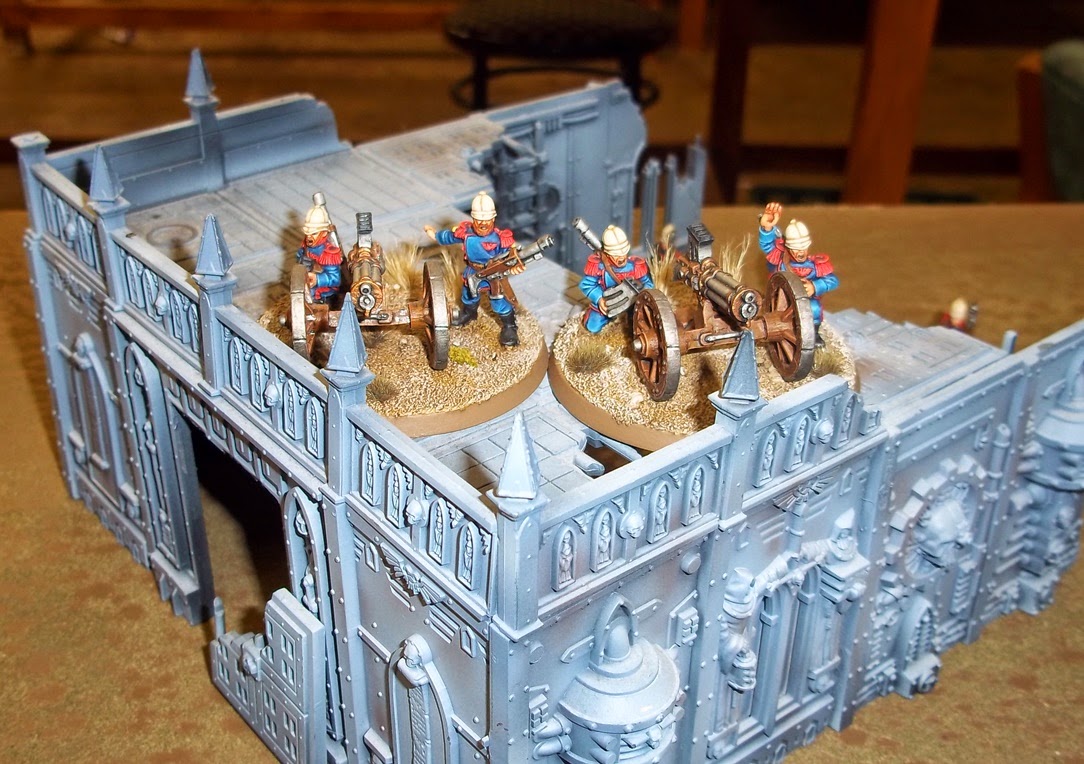 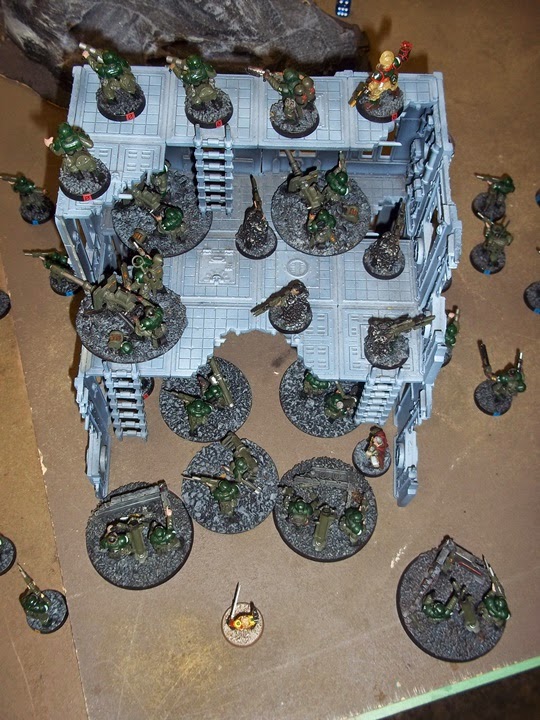 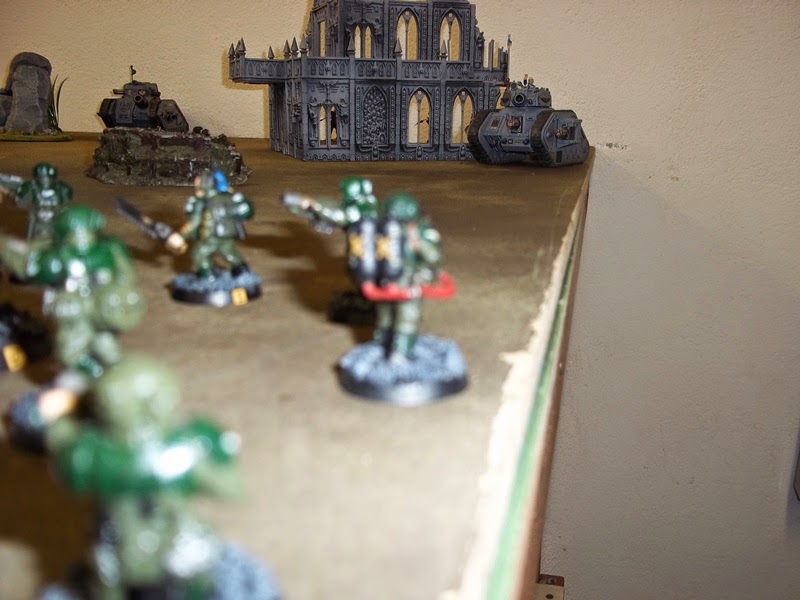 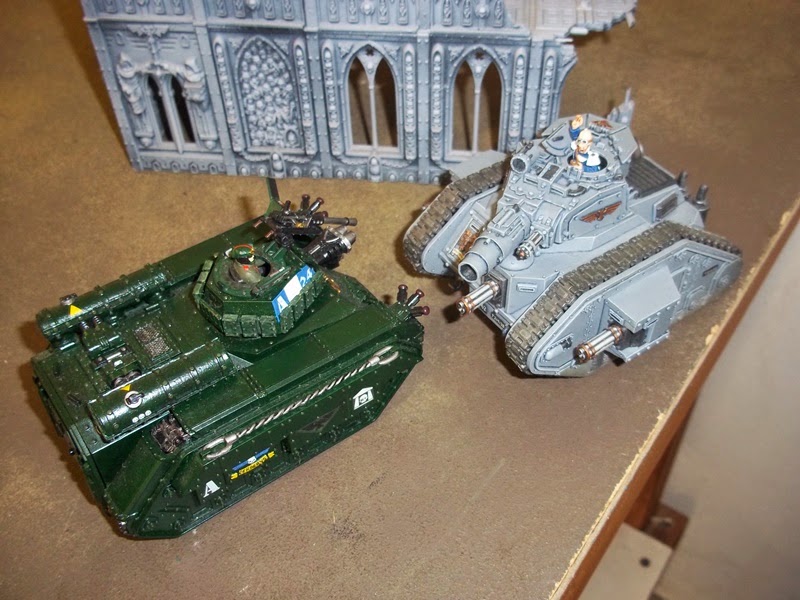 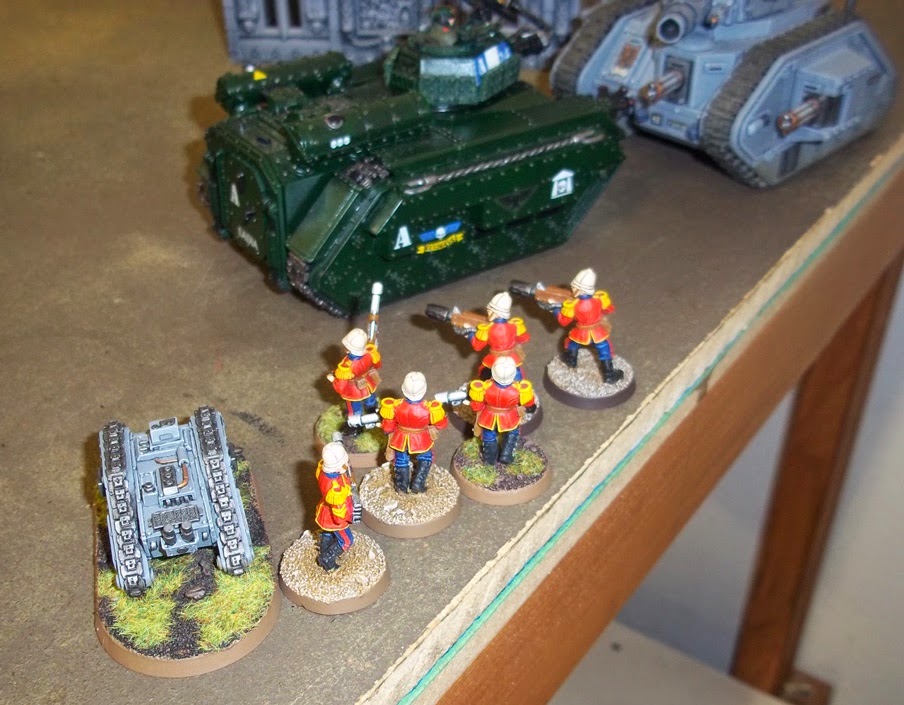 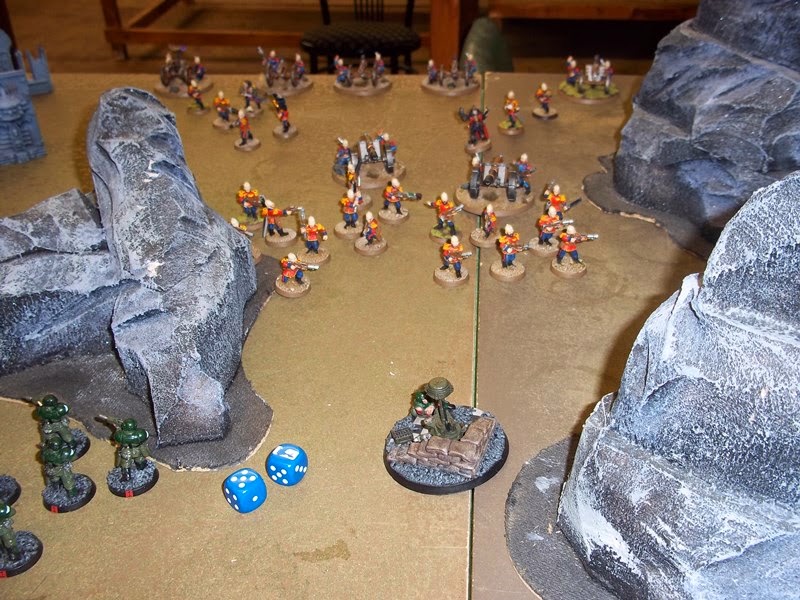 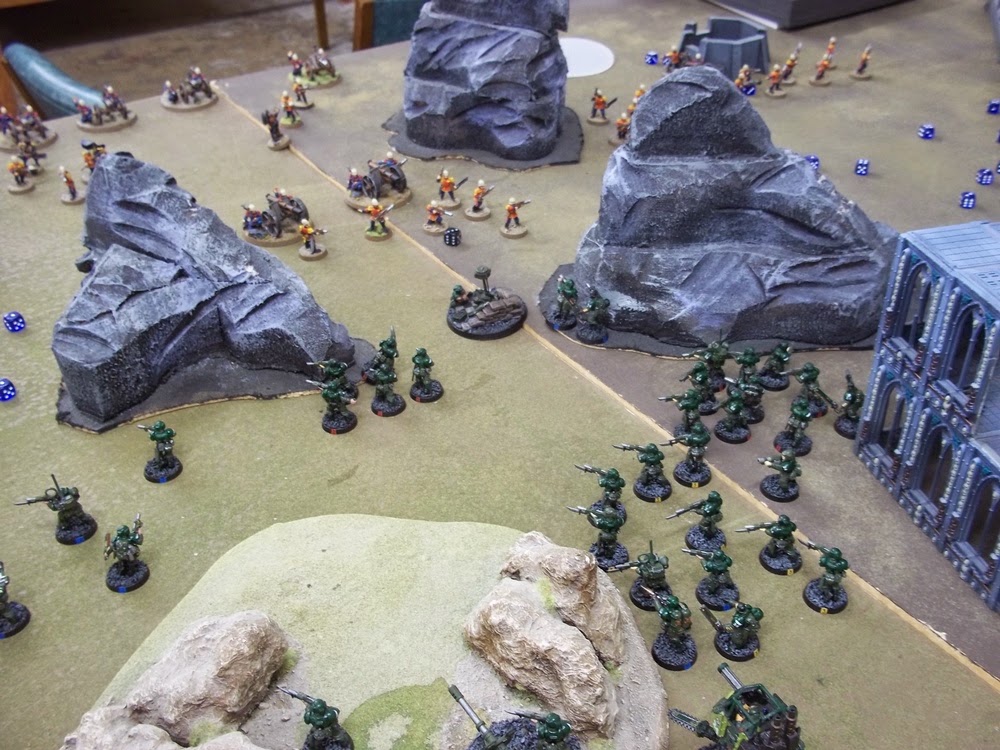