Yup - I finally finished the last of my veterans models.

Here they are (photos taken in weak winter light): 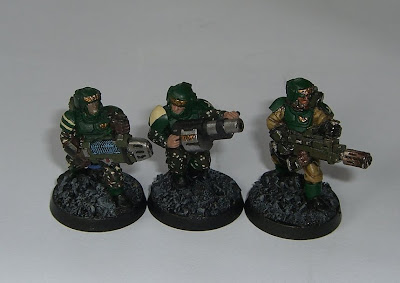 You'll note they're different. The plasma gunner is one I started two years ago, so I finished him up as he was always intended to be: 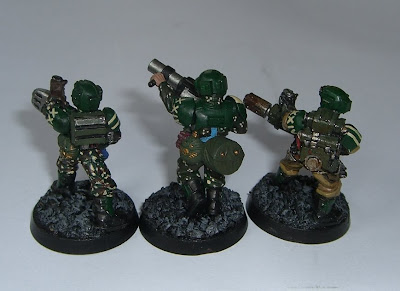 The grenade launcher is an experiment: I really didn't fancy painting more of my traditional DPM camouflage, so I tried something new on a whim...and I like how it turned out: 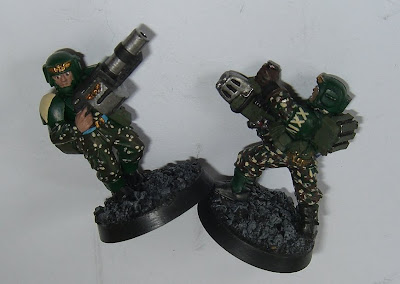 It's very simple: Scorched Brown drybrushed over a basecoat of Dark Angels Green and followed by little clusters of three dots of Bleached Bone.
The third chap is different because he was thrown in as a freebie with an eBay win, but his melta gun was needed, so he's joined the ranks of the veterans. 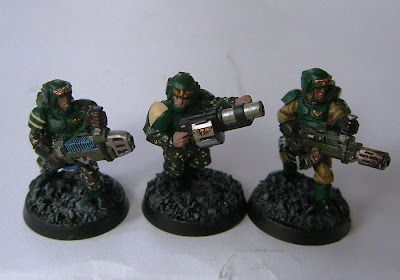 Well, that's another unit to tick off the big list then!

185 The Dangers of Outside Photography 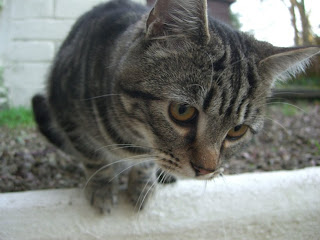 No - really: this is our neighbours' kitten, Boo, who - in between chasing our brave and stately old dog around the garden - has taken an interest in my models. Enjoy the pics.
Exhibit A: 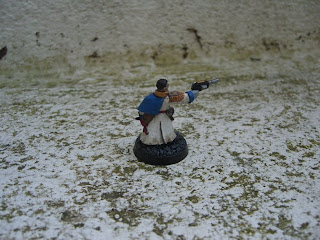 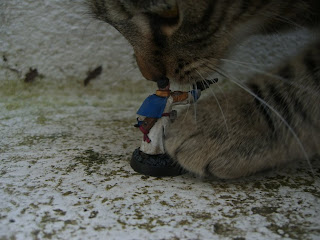 And the carnage continues: 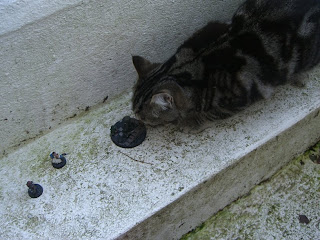 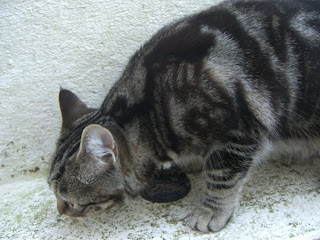 I've no idea whether Boo is a boy-cat or a girl-cat, but (s)he's really sweet! I should point out that one of the boys who own Boo also named his guinea-pig 'Bonecrusher'.
Genius.
Until next time, then...
- Drax.
PS: check out the great battle report posted recently by Iron Legion here.
Posted by Admiral Drax at 17:11 10 comments:

184 Officer of the Fleet

Hey,
This is the other model I completed recently - my Officer of the Fleet: 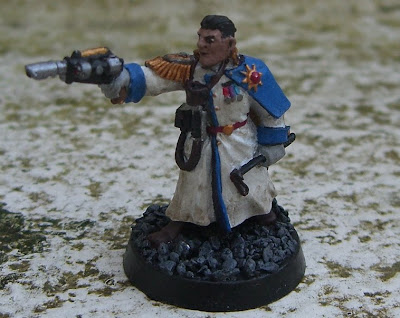 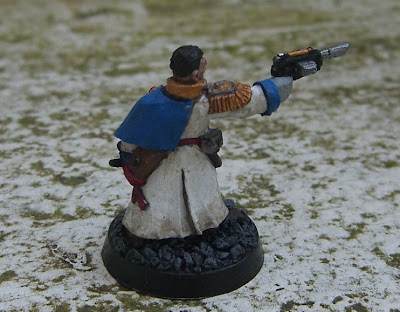 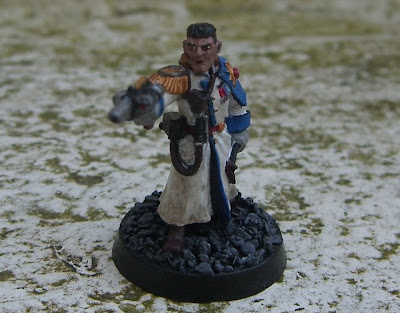 Not the best paint job ever, but the face and hair were really awkward. Like my recent Marbo, he didn't photgraph well; he looks far better in real life, especially the colour palette. Trust me.
Some of you may recognise him as Maximillian Weissmann - he's the commander of the Forgeworld baneblade Arethusa, but here he makes an apt model for my fleet officer.
For those of you who've not seen her, I've yet to paint up my baneblade, Zarathustra, but I've had both models for about eight years now - when I decided to get back into the hobby.
In case you were one of the readers who kindly wished me luck, we only got to play one game this weekend just gone (an unfortunate but understandable combination of unpreparedness and unfamiliarity with 5th Ed - not on my behalf) but my side won right at the end. It was fun.
Cheers,
- Drax.
Posted by Admiral Drax at 00:00 10 comments:

By the time this is posted, I'll be en route to Cambridge to play 3 battles - the details of which will follow - but as this chap will be something of a surprise to my opponents, I didn't want to post him until I was already there! 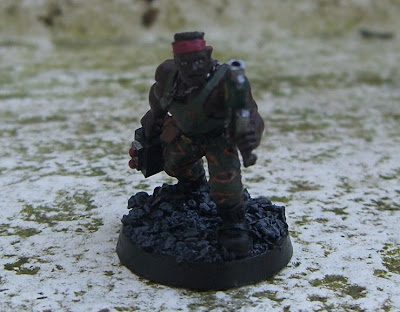 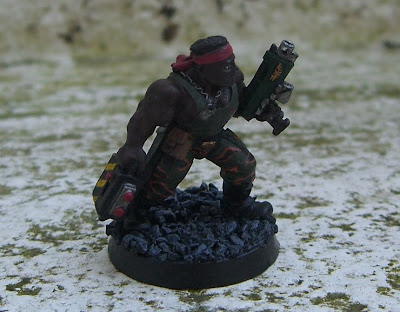 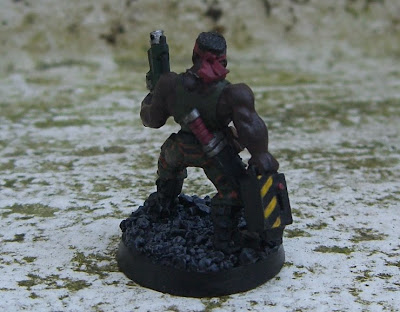 It's just the old metal Catachan lascannon loader with a converted 'ripper pistol' and a different paint job. I hate the muscle-bound look of the Catachans, but Marbo is Marbo, and I quite fancied trying my hand at some 'GW-style' camouflage. I quite enjoyed it, actually!
This is one of the quickest models I've ever painted, even with those stripes on the 'demo charge' which Mrs. Drax noted made it look like one of the traps that the Ghostbusters used.
This (of course) made me laugh and hug her and love her even more.
Hope all's well - I'll let you know how the games went, and show you my new Officer of the Fleet model too (finally painted after some six years!).
- Drax.
Posted by Admiral Drax at 10:00 16 comments:

Earlier this week, whilst on honeymoon in Egypt, my friends Luke and Sophie were hit by a sudden freak storm on the Nile. Their craft, a local 'felucca', was swamped and - after saving the lives of his wife and two other passengers by helping them to escape from the foredeck hatch - Luke became trapped and drowned. 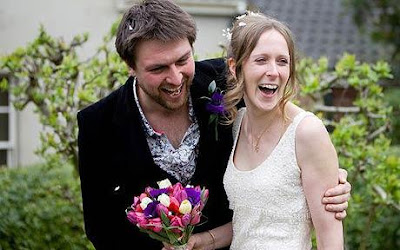 I can't express how profoundly saddening this is for us and our friends: I used to work with Luke and they came to our wedding. He really was someone who was genuinely full of life - a cross between the endearing wildness of the Muppets' Animal and the serene power of a brown bear. On top of this, he was an inspirational French teacher at a tough school, and he once lent me a banjo for an entire summer (he could really play). A tremendously magnetic personality.

Our thoughts go out to Sophie and both families: it's heartbreaking that he's no longer with us and tragically apt that he should go out in so selfless a way.

This scarcely seems the appropriate context for grief, and it's odd to express it in this way, but thanks for bearing with me.

What a fine example of the good in mankind.

NB: The Telegraph put together a very informative and sympathetic article, here.
Posted by Admiral Drax at 23:13 22 comments:

Okay, I don't like to blow my own trumpet, but I'm pretty proud of this one!

Behold: my new objective marker - complete with some small-scale freehand detail I've not tried before (on the screen), a homemade tiled(!) floor, and a wounded guardsman. As usual, click for details: 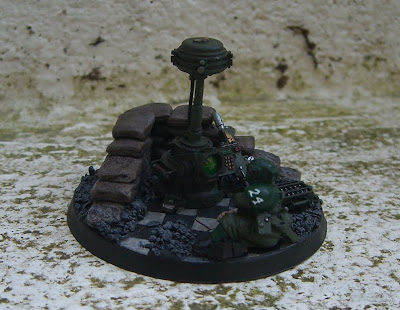 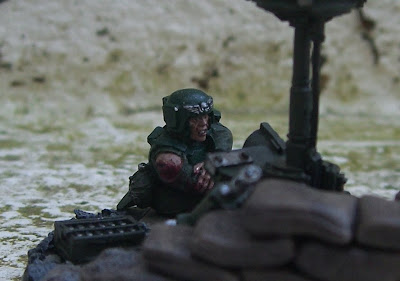 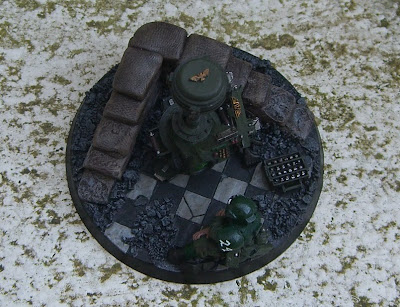 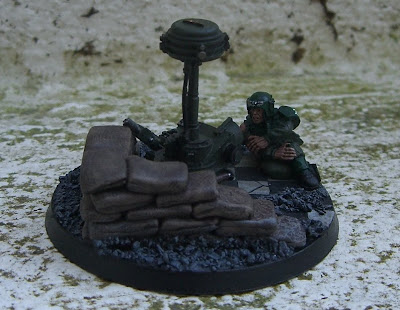 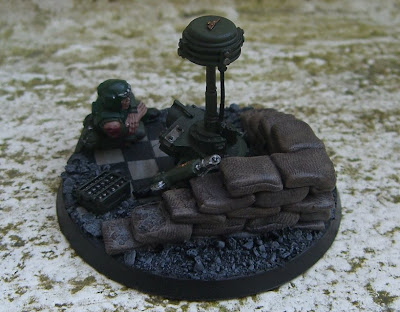 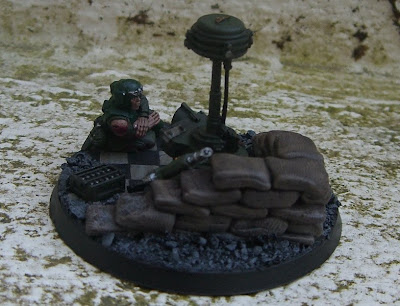 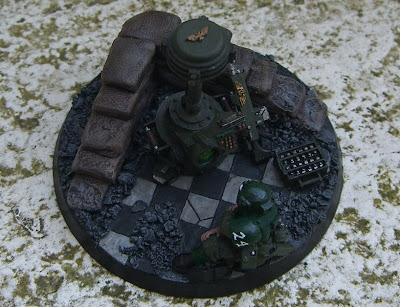 I finished more goodies too...to be revealed next weekend!
Thanks for your indulgence,
- Drax.
Posted by Admiral Drax at 17:06 20 comments:

I actually have a game lined up for next weekend - three games to be precise - and as I've not played since September, I'm very much looking forward to it.

So much so that not only am I travelling all the way from South Devon to Cambridgeshire for the privilege; I also plan to take an entirely painted army of three detachments: 400pts, 700pts and 1000pts*. Yippee!

And I only have one-and-a-bit models left to paint for it.

Best get on with it then, eh?

* I actually have around 3000pts' worth painted, but I've never fielded them en masse like this.
Posted by Admiral Drax at 22:18 6 comments:

179 Musings on the Future

Wotcha.
For obvious reasons, many of you recently have been posting either reviews of 2009 or your plans for 2010: it's great to see so many grand plans!
As for me? Well, being a teacher I'm stuck in the academic calendar, and as such my 'new year' really starts on September 1st [also my wedding anniversary: benefit = easy to remember; drawback = easy to be bogged-down with school stuff!]. I'm not much of a one for resolutions either, but I fancied posting, so here are some thoughts...
The models I'm proud of from '09 include my mortars, my finished wyvern, and the finishing of (almost) all of my veterans, including G/Sgt Harker and the second veteran heavy weapon team: 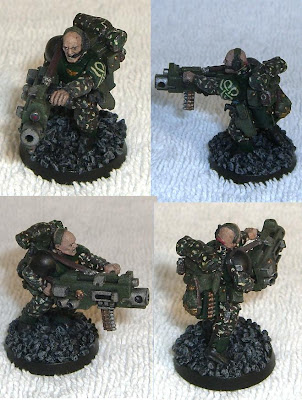 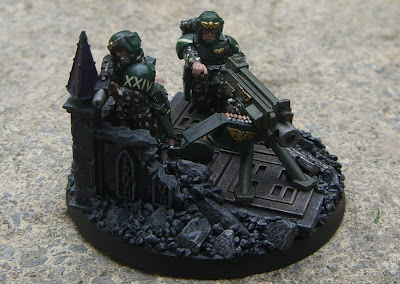 The painting I'm proud of includes freehand details on some guardsmen (numbers and aquilas), freehand nose art on a sentinel, and some attempts at edging on a space marine objective marker for a mate: 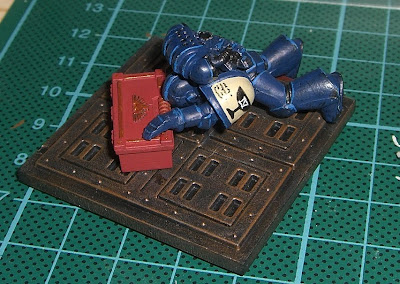 I'd hoped to finish off my infantry comapny by the end of my Christmas holidays, but that didn't happen, so things to try to get done this year include the following:
- Finish the last of my basic infantry (bringing the total company strength to 164 pax)
- Finish my sentinels and Leman Russes
- Finish off a few charcter models
- Paint at least another few stormtroopers
- Paint my increasingly ancient (FW) baneblade
- Paint my third squad of (old metal) armoured fist troops
- Get more scenery built/painted (mostly painted)
- Finish some of my Warhammer FB units properly.
Interestingly, I've no desire to buy any new models. Of course, some of the next IG models could be great...but I certainly don't need anything new, and I've managed to resist those valks so far!
Here's to a good 2010, eh
- Drax.
(Guess who's avoiding the huge pile of marking he has in front of him!)
Posted by Admiral Drax at 23:46 4 comments:

Hullo!
Well now, I said they'd be quick and nasty, and I finished 'em today (a snow-day helped!): 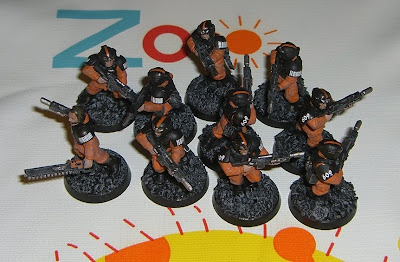 [If you're wondering, they're posing on Baby's changing mat].

Thanks to everyone who gave me their suggestions in the last post - especially to Hephesto and harreh for the idea of using the barcodes [okay, they're maybe a little excessive and impractical, but when they're lined up as a squad the barcodes really work!] - and thanks also to Ron who (yonks ago, if memory serves) noted that he often didn't bother detailing the faces of grunts...I tried it for these, just relying on my new bottle of Devlan Mud wash.
Strange to be forcing oneself to paint in a more sloppy manner. It did make it far easier to include the last four of my six three-piece click-together guardsmen I bought on a whim last year though: can you spot them?
I've been working en passant on something special too, to be revealed next month. Watch this space...
Cheers, all,
- Drax.
Posted by Admiral Drax at 22:44 15 comments:

Obviously, baby Drax (who is beautiful and very sweet-natured indeed!) has kept me away from the brushes and paints fairly comprehensively, but I'm onto the final details of the infantry squad shown in post 175.

More importantly, I decided on 31st December to make some penal legionnaires, as I actually have a game coming up, and they're a fun squad to field. Now I had absolutely no intention to spend lots of time converting or painting, so I deliberately planned a very simple paint scheme using basic models as they were. The result (so far) is as follows:

I've almost done another five too, but unforseen distractions have scuppered my plans to get the whole squad done before returning to work on Monday. Obviously they're basic, and I've steered away slightly from the severity of the codex description, but here's where I could do with some ideas:
What can I simply put on their shoulders?
(NB: I don't want them to be in keeping with the bulk of my troops - they're separate.)
So far, I'm thinking of white transfered squad numbers (my normal guys all have their regimental "24") on one shoulder, but I'm happy to take suggestions for t'other. Or anything else for that matter...
Thanks for your time, thanks for sticking with me, and thanks in advance for any comments.
- Drax.
Posted by Admiral Drax at 00:53 16 comments: