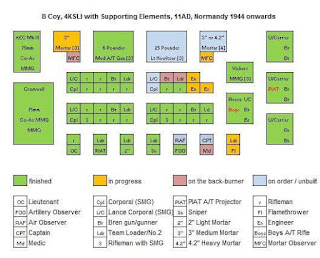 I figured it was about time that I should explore and update my painting chart for Bolt Action in 28mm, especially as I'm trying to curtail any and all expansion at the moment.

That fourth section is annoying me (the one that's all four colours and yet still one man short!), but I've reconciled them to being a section of odds and sods, and the engineering equipment doesn't detract from their ability to fight as riflemen.

As it happens, I also just realised that with plans for THREE mortars (one more than a conceivable 2-platoon list could legitimately field), the loader of my 2" mortar could in fact act as a 10th man for 4 sect...

I do so wish that the always fun but not very punchy 2" mortars could just be fielded as part of a platoon without taking up the 'support' slot...

Like wot it says above, I've made a start on a few Bolt Action reinforcements. 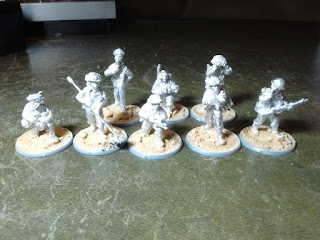 [Above] The engineers and flamethrower team (front row, left-right) I've had for a while, but the observer models are part of my booty from the 'UK Gathering' Tabletopbattle tournament last month.

They really are all lovely models, and exceedingly characterful: I'm looking forward to painting them, but I'm not 100%  sure about the recessed bases they cam with. Usually I'd use 25mm metal washers for the metal minis, but I'm trying to be less OCD with the way I go about my Bolt Action, after almost two decades of painstakingly identical 40K basing.We'll see. 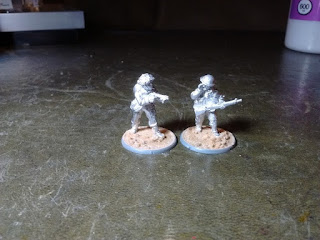 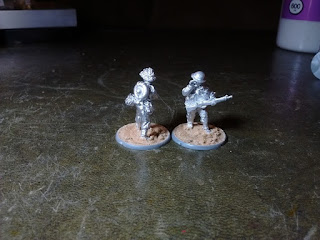 [Flamer team, above] These chaps are properly tasty, rules-wise. Fluff-wise, I'll probably get them a jeep to ride in, as that's what the 11AD flamethrower teams had. Fast, but unarmoured. 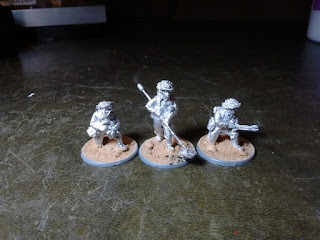 [Engineers, above] Sadly, the Brits don't have any rules for using engineers in combat roles, but I'll use them as spare bods in squads whenever I need them. That kneeling guy with the wire cutters? - I reckon he'd make a rather brutal-looking Number 2 for my medic! 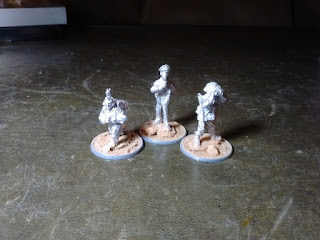 [RAF observer and two others, above]. Currently, my Arty observer is actually played by a senior officer model, but I quite like him doing that, so I might just keep things that way. We'll see.

I've got a £10 voucher for Warlord Games burning a hole in my pocket right now, and as it has to be used by the end of the month, it almost certainly will be. D'oh.

Cheerio for now, and happy gaming,

Well, the title says it all.

Last Friday, having to drive home to Pompey, I detoured via my new club in Torquay to play a quick game of Bolt Action.
I'd planned to play 750pts against some nasty SS, but it morphed into a 700pt game against Alex's lovely paras. As he had a fluffy para force and I'd planned to try out a fluffy carrier patrol, we decided that the 'point defence' mission (or whatever it's called) would suit.

As it happened, and as they cancelled each other out, for simplicity we both decided to leave our free artillery observers at home, although my preliminary bombardment still went usefully ahead.
It went to a hard-fought draw, although I was starting to edge ahead by the end.

A handful of interesting lessons were learned though, viz,:


Alex was - as ever - a most gentlemanly opponent and a joy to face across the table.
Happy days, eh?
Cheers! 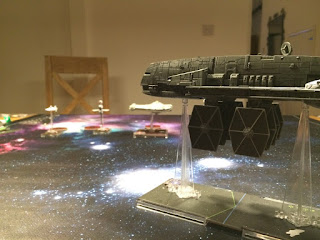 PS: I played a swift game of Bolt Action tonight, so that'll be up soon...
Posted by Admiral Drax at 01:45 4 comments: