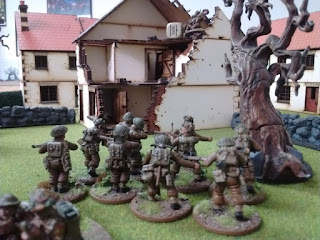 Last Friday I got the chance to roll out my fledgling 1250pts 28mm Bolt Action list to see how they would fare on the actual tabletop against some Germans. It was also a chance for a sneaky wee back-door entry into Cameron's brilliant Firestorm Caen campaign! [see here: link]
I had an absolute blast, and I'm pleased to say that the Toms did rather well...so well in fact, that my opponent (whom many of you might just know) has asked to be masked in anonymity. Let's just call him G-----.

Mission and Forces:
In a nutshell, we rolled for the mission and got 'Demolition' (essentially 'Capture the Flag'), so we had to set up half f our forces each with the rest in reserve. My 'Reinforced Platoon' was outlined in my last post (here: link), but G----- had the following - roughly speaking - all veteran: an officer, an air observer, two 8-man squads, a sniper, a flamethrower, an MMG team, a grenadier squad mounted in a half-track, and a panther tank - not by any means 'tournament-ready'! Objectives were his turretless command tank and my rear-facing MMG team.


This bit's quite easy. The opening turn saw the Germans do very little of note beyond the sniper pinning my 6pdr. In return, my sniper killed his Flammerwerfer - yes! The troops moved up into or towards the buildings. Airstrikes and barrages were placed.
In turn 2, the troops moved up a bit, my vehicles failed to arrive, and both the airstrike and the artillery barrage were delayed. His panther arrived and only had 3 Section to fire at, but didn't kill anyone. In an exchange of musketry, the Germans came off worse, with his two 8-man squads both losing three for only one of mine. Credit here goes to 3 Section, hunkering down in the wheat on the right flank for their staunch stance and withering fire.
In turn 3, G------'s luck really took a hammering. Firstly his airstrike backfired, and sadly for him der Luftwaffe mistook his own Panther tank for my infantry. Obviously. Easy mistake, right? This hit him hard, but my artillery strike followed imminently, and extremely close by, hitting him even harder. Both his nasty MMG and his assault-rifle-wielding grenadier squad took the full whack of damage, and were wiped out; everything else nearby was, of course, heavily pinned - *sad face* . Then my vehicles roared on, adding some mobility but failing to hurt anyone. 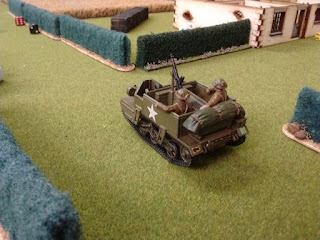 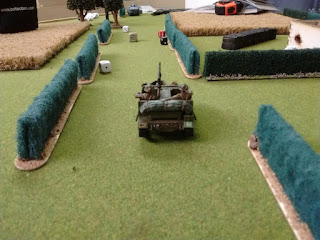 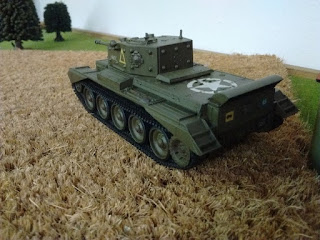 To add...well...injury to injury, my sniper, having moved position last turn, popped-off his sniper.
Turn 4 seemed a bit like rubbing salt into the wound, with G----- down to 5 dice against my almost undented 12, but we struck on. More of the same happened, with the indomitable 3 Section finally pinning one of G-----'s two remaining inf squads to death and scaring the half-track off the table. In a cheekily desperate last move, G----- sent his last five infantrymen sprinting forward into the heart of my lines. We figured we'd give them a chance of fighting through if G----- got the first die in turn 5.

Turn 5: I got first die, and we called it. All the Germans had left was an air observer, five very endangered infantrymen, and a pinned and isolated panther. I had lost only four men, and realistically there wasn't much stopping me from dashing to the objective... although, frankly, I am terrible at remembering to do this.
The Result:

Yeah...a thrashing. The Toms gave old Fritzy a jolly good six-of-the-best, trousers-down, and I was very happy with them. Some thoughts:

I remain, Sirs, your most humbl. and obt. servt.,