I did say there were more Germans, didn't I?

Here they are (with only a couple of teeny-tiny tanks to come - I promise) - and all labelled up for your convenience: 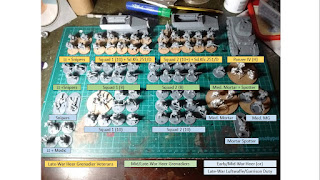 Without going into the detailed whys and wherefores of everything, I managed to secure the following - very cheaply - in order to put together those models above: 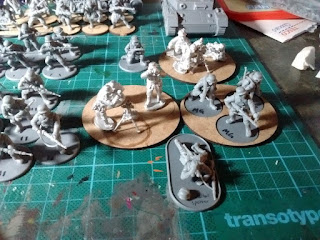 At first, I felt a bit frustrated at the slightly odd mix, but this was mollified as I really quite fancied taking some Luftwaffe Field Division as inexperienced troops for a change, and they often still wore jackboots and some more obsolete uniform...but then I got the new army book and bafflingly - inexplicably - the Luftwaffe squads are not allowed to take LMGs! Yup: despite the info-box covering the variety of different LMGs the Luftwaffe troops were issued, they cannot take LMGs. Go figure.
Sooooo, instead I made the call that my jackbooted troops would play the dual role of either second-line garrison troops in Normandy, suddenly deployed to help plug a gap or - if needed - a smattering of early war troops for early war scraps. There are still disadvantages to this, mind: namely that (a) they have early-war-style gascloaks in a prominent chest pouch - rather anachronistic after '41, and (b) the only 'inexperienced'-rated troops in the Normandy selectors are...wait for it...Luftwaffe Field Division...who can't technically take their LMGs.

All of this means that I now have a sprawling German force, totalling about 2000pts (and a little more yet to come) which can be deployed either as one single, rag-tag German force comprising three platoons, or separately as early-, mid- or late-war!

As for the models themselves and their basing? Well, I shall talk about those, I suspect...next post.

Right now though, I'm a-noddin' off at my keyboard, so