Warning: long-ish post but poor quality pics. Annoyingly.
In February, I had the singular joy of attending the third UK Tabletopbattle.com (TTB) Bolt Action tournament, and had a thoroughly enjoyable day. I got to meet up again with not only the TTB crew themselves but also a number of my fellow Patrons, whom I'm delighted to count amongst my friends. 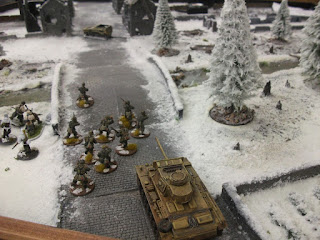 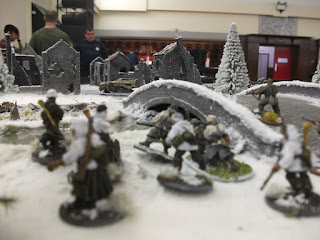 The tourney was actually the first to be held in the new Warlord Games event room, and whilst the space was HUUUUGE and the Warlord Games staff absolutely brilliant, the tables themselves were...disappointing. In past TTB meets, the players have provided the tables, and the results have always been gorgeous, but for Warlord's first event there was simply nowhere near enough to go around the 15-ish tables, and consequently most of them were at best lacklustre and at worst worryingly sparse. There were no real themes to speak of.
The event was for three games at 750pts with limited restrictions [1: no armoured platoons; 2: don't be a dick] from any selectors. The missions were set in advance, and I guess there's a rationale for this, but I found the missions were an odd mix - made more tricky still by the sparsity of terrain.
The pace of the day was enjoyably slow: whilst it would've been nice to get four games in, it was brilliant to not feel rushed and still have time to natter and redeem my token for a free lunch - had I not been driving, I may even have had a wee nip from the bar too. Being able to pop into the WG store itself was also brilliant - what a marvellously laid-back and knowledgeable group of people they are, there!

I shall give brief notes on each game, below - including vaguely what I was up against - but I couldn't resist taking a by-the-book British platoon for this event [that way, when I lose, I can console myself by wallowing in their historically "accurate" ineptitude!]:

...and that's just about as generically vanilla as one can get in Bolt Action! Everything's useful; nothing's really overpowered. Solid. Unglamorous. British.

Game 1 - Top Secret
This had all the makings of the best game of the day. The table had a half-decent layout, my tummy was lined with a bacon sarnie and a cup of tea, and I was facing off against the entirely splendid Luke.

Luke was fielding his gorgeous Easy Company paratroopers under Dick Winters (as a normal Lt) and as an all-infantry force of fighty veterans, I was pretty apprehensive of my chances in this game.
As it happened, it was a very enjoyable game, but a very one-sided one. I was able to run two of my squads on: straight to the objective and then straight off with it. I counted them all out, and I counted them all back in again.
Luke had called the match as a friendly grudge-match, after our last meeting (here - link - turn four) and I'm delighted that he did, because he's a cracking opponent and a real sportsman - the daft nature of the mission (Top Secret? - ugh!) was such that he didn't really have much of a chance once I neared the objective, and yet everything was conducted with grace and humour. Perfect!

This game was less fun. Partially because it's a strange mission (especially with the way the reserves come on) and partially because I lost...but mostly because my opponent seemed to take an almost clinical lack of joy in the proceedings. He seemed to struggle with the idea that I didn't use my free arty observer as a three-man assault group and couldn't understand why I didn't just try to shoot his officer to force an auto-draw.

Neither of those approaches is how I roll, I'm afraid.
I was both outplayed and unlucky in this game - to use the vernacular, I got my arse handed to me on a plate - but I usually enjoy a thrashing. My opponent's army was nice looking (an Italian desert force) but it was honed for gameyness; moreso than was really necessary for a friendly tourney. Discretion here precludes me from naming names, and it was nothing personal...just - y'know - not a fun game.

For the third and last game, I faced off against the indomitable and very pleasant Rob and his conventionally German force of Germans; weirdly on the same table as Game 2. Weirder still, with fifteen minutes of play left, one of the Warlord guys came round and reclaimed some of the buildings, trying in vain to replace them with similar ones. Curious.
This promised to be a challenging and fairly well matched game...until my prep bombardment (Yay Brits!) pinned most of them and immobilised his Panzer III. The pins they could deal with, but losing the mobility of their AT asset made Rob's life pretty tricky - especially as (a) it was also pinned and (b) at some point its turret jammed, which limited the poor thing's arcs even more.
It soon became clear that the Germans couldn't get off the start line, whilst the Brits pushed relentlessly forward, helped by the Cromwell taking advantage of the knackered panzer to crunch its way up his left flank, ploughing gleefully through three small squads and his artillery.
Unluckily, I forgot that guns could now traverse and still fire (albeit at a penalty); luckily the shot bounced and it turns out that guns are automatically destroyed if they get overrun. Whoop!
The squads stayed and danced a merry fandango back and forth with the Cromwell but by the time we ended things, he was fast running out of troops for almost no British losses at all.
A solid win, and Rob was very graceful and sporting indeed in the face of a disappointingly crippling start. What a fine chap, and a good-looking force too.

Game 3 Notable Moments:
Overall Conclusions
A very enjoyable day's gaming and seeing the TTB patrons and crew, but a slight pity about the scenery and game 2. No charity raffle either! Booooo.

On the other hand, for a modest ticket price top-up, we got a cracking goodie bag, with freebies including a variety of discount vouchers, an early release of the 'Battle of the Bulge' campaign book (£20 on its own!), a copy of the 'Gates of Antares' mini-rulebook, a signed print and some limited edition metal minis. Pleasingly, there were also Fallschirmjager and US Airborne sprues, and after some swapsies and kindly gifting, I ended up with twenty-four FMJ and an officer to lead them. That's a whole new branch to my burgeoning German force.

Big thanks to my opponents and mates - many of whom will never read this - aaaaand...

...a big of exciting news cometh for my next post!

Cheers, and apologies again for the cruddy photos,