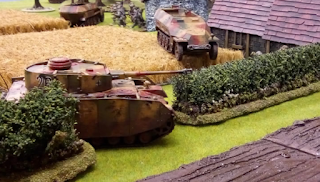 Last week I got to play against my pal Alex again, and it was a beautiful game!

Neither of us really knew what the other would bring, but we ended up with two well-matched forces and the 'table quarters' mission - whatever it's called.

I'll keep this as short as I can and stick to captions only, but there are at least some nice pics in amongst all the bluriness! 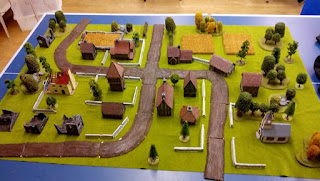 Alex set out a gorgeous table - his corner was bottom-left in this pic; mine top-right. Most of the other pics are from my side. 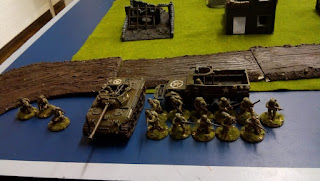 Alex's Americans. Mostly regs with a few vets. Scary things included a sniper, two bazooka teams, a hellcat and a squad of Rangers. Their rules are awesome, and all Alex's toy soldiers are beautiful. 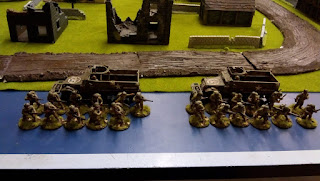 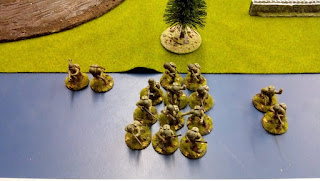 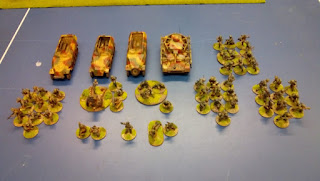 My blurry Germans. Two veteran squads, an assault engineer squad (with a flamethrower) and a regular squad at the back. In the front: Nebelwerfer, medium mortar, a Panzerschreck  and a sniper. 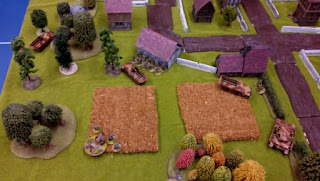 My deployment. Spaced out with the double-MMG Hanomags as an AA screen. It worked, thank goodness: they blew the "Jabo" out of the sky! 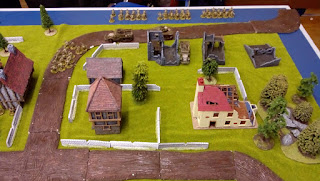 US deployment - and I've just realised that we completely forgot to roll for preliminary bombardments! 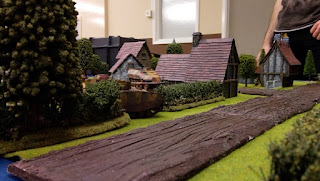 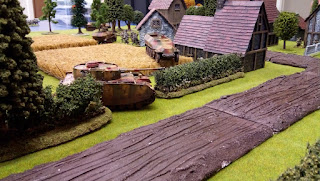 ...and after rolling forward in turn 2, blows the US air observer out of his high-up vantage point! 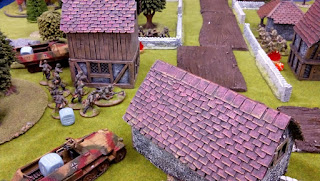 On the left flank, having shot down the airstrike, my units tentatively push forward, to bring the fight to the Rangers (right). 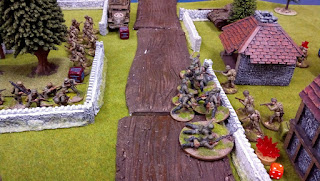 The Veterans, tucked behind the wall on the left, kill a couple of the Rangers before getting shot to death by the squad edging down toward them on the left. Boo. However, they were soon avenged by my brand new regular squad (in the centre here, with the prone MG34), who charged in and finished the Rangers 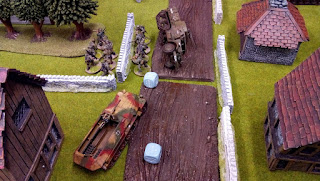 By this point (turn 4, I think), vet squad 2 has trundled forward, gunned down the nasty Americans who killed their mates and claimed their half-track. Woop! [If you're wondering what happened to the regular guys who polished off the Rangers, they got blasted by a very lucky hellcat shot. Boom!] 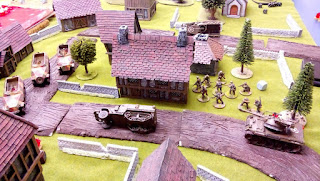 After their earlier success, vet squad 2 then charged and killed the sniper in the building before exiting and finishing off both the regular bazooka team AND the pinned Hellcat with a damned good Fausting! Most valuable unit, I reckon! 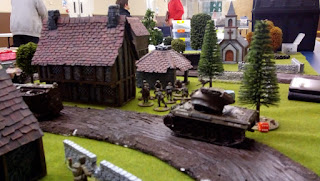 (Oh, and that M3 halftrack was blown up by my sneaky hiding 'Schreck, putting a lot of hurt on the officer, bazooka and engineers within it! Tee-hee!) 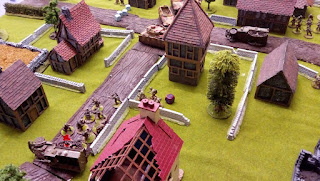 This is on the right flank, at the end (with my table edge top-left). Those are my assault engineers on the road: they killed the squad who earlier abandoned this other halftrack, with their flamethrower failing to hit and then running out of juice, and then themselves got roasted by the US engineers, whose last desperate act was a perfectly-timed 'Hail Mary' move and their own nasty gout of flame! Luckily, they only hit one(!) and my veterans passed their test. Whew! Dud flamethrowers in this game! 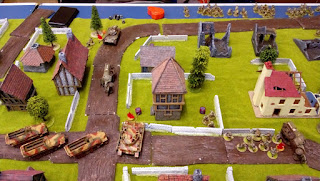 By the end, with the Americans on their last legs, my vehicles converged to FINALLY kill off the veteran bazooka team (the Pz.IV's MGs did the job) and all the Americans were left with was (I think) two officers and 3 engineers (whose flamethrower had ALSO) run out of juice! 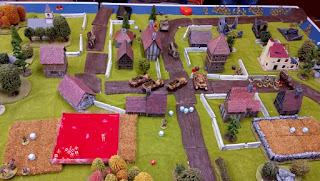 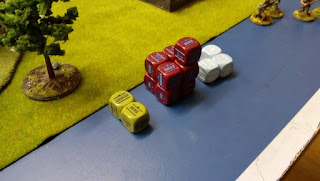 As always, the butcher's bill. The green dice are also US, so it was 11-3 to the Germans, who also controlled three of the four quarters (although not - as it happens - the US home quarter!). My losses included my 1st vet squad, the regular squad and my USELESS sniper, who failed two tests to act and then ran away.

This was a thoroughly fun and very pretty game. Alex was a real gent, as always, and although the sides were fairly well matched in theory, he dealt with the turn of the tide with commendable grace and good humour!

Honestly, I'm amazed at the antics of my second veteran squad. Having helped to gun down a Thunderbolt, they went on to destroy the following:
- a squad of GIs,
- their halftrack,
- a sniper team,
- a bazooka gunner and
- a hellcat tank destroyer!

PS: Originally, that second image - the overview of the table layout - was the first one on this post, but folks seeing a link on Facebook quickly and kindly pointed out that it looked rather too much like a swastika. Noted and edited. Thanks, Internets!
Posted by Admiral Drax at 12:00