I decided - as I had less homework than normal this holiday - to challenge myself to get an entire project done. To this end, I opened-up my options as polls in a couple of my games clubs, and the winning option for completion by the end of January 2019 was 1000 points of British Paras: To be more precise, a list from the Market Garden campaign book for the 21st Independent Company - the British Pathfinders. I've always been interested in those who drop in first, and I enjoy playing unusual lists too. It's going to be a tricky list, mind: there's no free artillery FOO, no AT guns, no vehicles, no on-table artillery, none of my beloved 3" mortar...essentially nothing that couldn't be sneakily parachuted in. What they do have is more PIATs, snipers and 2" mortars than normal, a Captain as their default OC, and a cool special rule for the actual pathfinder sections.

The plan (ha!) is to make some progress - however minimal - as often as I can: every day, if possible. I'm now on Day 8, and by now I have all 39 men in the platoon based, primed, base-coated and with the desert yellow base-coat on their smocks. It's been quite a slog! 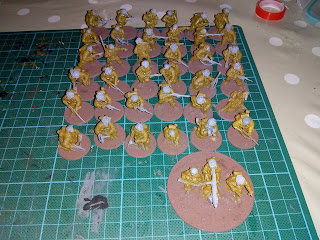 It's been an uncharacteristically speedy start (for me) and although I'm dreading the painting of the Denison smock camouflage, I think I should be okay to get them finished by the end of January.

I must say, it's really weird for me to see a 1000pt Bolt Action army represented by just 39 men! Still, I've wanted paras for ages - they're so damned iconic - and as I got the box set essentially for free in a trade for some mid-90s Space Marine odds-and-sods that I found in a box, I'm laughing, really!

More updates as I get to them.