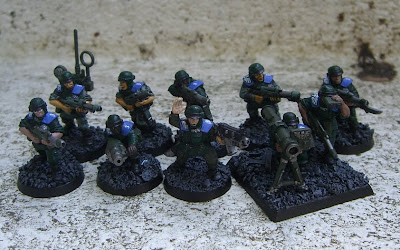 And the back view. You may notice the grenade launcher trooper has been converted from an unloved Griffon mortar crewman: 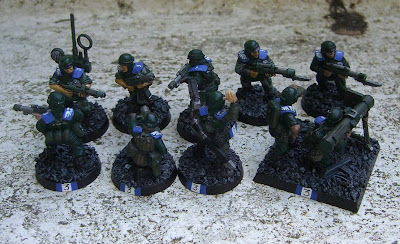 I've been re-working my Armoured Fist platoon [see here and under 'Posted Units', right] to include 2nd Edition missile launchers - not because I think they'll be of use but simply because I really really like the models and if I had them as a separate h-w squad they're not supposed to have access to a chimera. According to the Codex, at least. I'll paint up a few spares eventually, then I'll have a little more flexibility.
Once I've done the other missile launchers, I'll post the whole platoon with transports - should make a nice photo.
I've also revamped my painting chart, thanks to a minor recent purchase and some AWESOME GENEROSITY from Zzzzz over at Devos IV. More on his beneficence later, but pop over to him if you've not done so already - he's got some great stuff in the pipeline.
Go Storm Wardens!
Thanks,
- Drax.
Posted by Admiral Drax at 14:23