A week-and-a-half ago I managed to get to the club and play a game at short notice against a very nice chap called James. He wanted something competitive, so I brought a fairy cheesy competitive Mechanised force - 1500pts. Here it is: 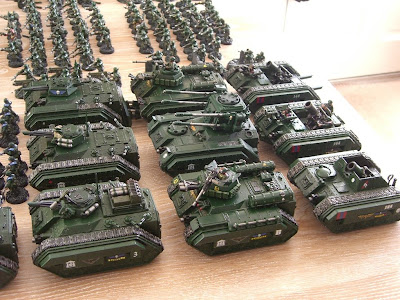 I played James's Space Wolves, and his list was made in response to mine, given his choice of models. We thought it'd be fun to play a game from 'Battle Missions', so we did, and we rolled up 'All-Round Defence' meaning the marines were in the middle defending a central objective and I was attacking from all sides. My HQs and HSs had to stay in reserve.

To cut a short story shorter, I won first turn and had tabled him by the end of my turn two. Here's my post-match notes - in no particular order - as I'm wont to do...:

A top opponent, and I was genuinely sorry for giving him such a tonking. The emperor was with me that night.