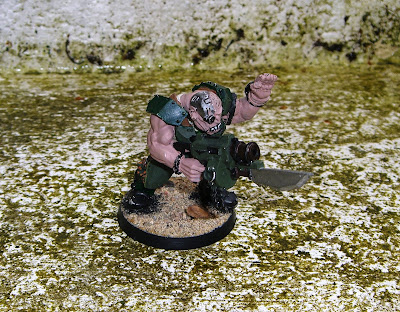 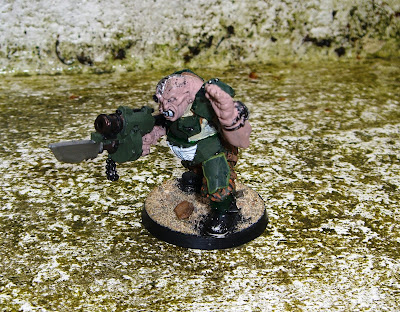 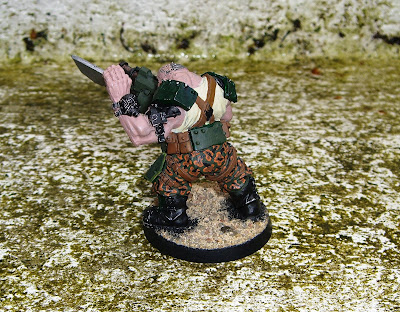 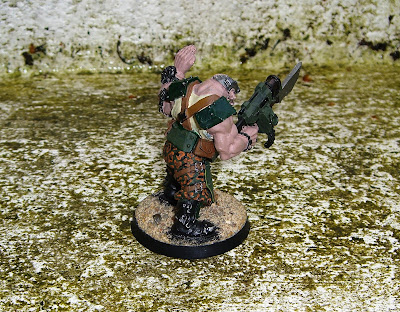 This is really going to be an exercise in me practising some new techniques: I'm going to have a play with flesh tones (especially the musculature) and stubble...but for now I know it looks pretty damned basic. One thing I did want to have a play with was a different camouflage pattern on the trousers, but having done so, then checked the style of The Inner Geek's Guardsmen, I realised that (a) he goes in for a lot of light brown leather accoutrements, and (b) the orangey colour of the pattern I'd chosen would clash too much.
So, I added dashes of black to the pattern, and it'll be darkened more yet with some shading. I'm also adjusting the brown of the leather straps a bit more.
I've also made a tentative start on edge-highlighting the armour plates like the Geek does, but mine look rather too stark at the moment.
I will, of course, add a couple of Draxian touches in due course...
Be sure to check out the (doubtless awesome) stuff that The Inner Geek's been doing to the miniature I sent him: I'm almost salivating at the prospect! He'll be posting at some point today too.
Cheers,
Drax.
Posted by Admiral Drax at 19:00