Well, I've acually got back to the gaming club over the last month - in its FANTASTIC NEW PREMISES! It's huge and friendly and fantastic...and I've played two games there.

Firstly, a 2000pt clash against Chaos Space Marines. I took a fluffy mech list, for fun (always for fun!) and got absolutely tonked by a nice fellow called Mark. Seriously: it was probably my worst game ever - practically everything I did was almost comically poorly thought-through. It was really good fun and though I absolutely deserved the loss, Mark was gracious in victory. 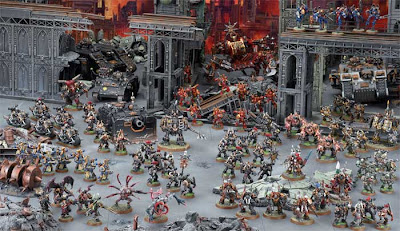 
This week the Cadian 24th had their first encounter with the Dark Eldar. Jay's 1750pt tournament force went up against my infantry company - 1750pts of basic guard infantry is a lot of infantry, although the only heavy weapons I had were 3 mortar squads, two autocannon squads and one missile squad. Essentially, it was my standard inf company plus legionnaires, Marbo and a dismounted psyker squad. 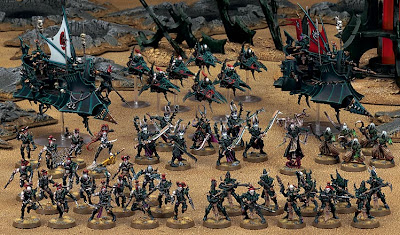 
Again, it was a great game, but this time it went better for me. For the loss of not even a quarter of my force poor Jay's Spikey Death Elves were outnumbered and slaughtered to a man [elf]. One thing surprised me - how good DE shooting is! I thought they were all about the close assault. It was a huge eye-opener for me to play a new and utterly unknown foe, and Jay's always a superb opponent. His models died gloriously and it was a great learning curve.

Thanks for the games, chaps.