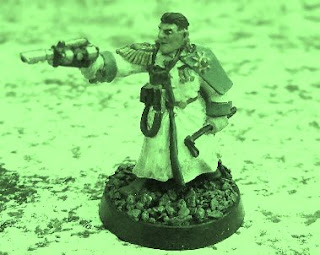 A large Ork warband led jointly by the mighty Warboss Gorblud, the uncontrollable Braindead Bidsod and the Infamous Wazdakka Gutsmek had made planetfall not too far from the city and approached it with little warning. Had it not been for the keen recon units of the Cadian 24th, the Imperial forces would have been completely caught unawares and scattered in short order. As it was Drax had just enough time to call in reinforcements from the regiments stationed nearby.
To his aid came the best the world of Praetoria could provide: the mighty 4th Foot Regiment led by the indomitable Colonel Gravis and the 4th Mechanised infantry led by the renowned Colonel Winterborne. The Imperials did not have time to set up fully entrenched positions and had to meet the Orks almost head-on - a worrying prospect to the most steadfast of Imperial Commanders. They did have one ace-up-their-sleeve which was an artillery emplacement that gave them excellent range and coverage of the city and soon-to-be battlefield.
The Orks however, had also not been idle in their reconnaisance and had dispatched their own force to take out the artillery before it's full might could be brought to bear. It was a battle fought on two fronts and could easily swing either way through moments of genius or misjudgement. The scene had been set for a tale that would either paint the Commanders as heroes or harbingers of disaster."
NB: Narrative awesomeness courtesy of Matt. More details to follow. And this is going to be good: trust me.
- D.
PS: See also Col Gravis' most recent post, here: [link].
Posted by Admiral Drax at 23:21