I said I'd cover my most recent game in a little more depth and so I shall...although it won't be in much depth because I don't like taking photos of games when I'm using unpainted or unfinished minis, and this was a game for trying things out.
My two-platoon list was essentially as follows - all regular - (and again, this was designed (and okayed) to try out a few new units, so please ignore any apparent cheesiness...):

...That's a whopping eighteen order dice: very handy against the high-cost/low-dice lovingly painted veteran SS troops I was up against!

The mission was (as it always seems to be) Hold Until Relieved and I chose 'Attacker', as being British, that gives me the opportunity to use one of my special rules to choose the best of two rolls for preliminary bombardment. 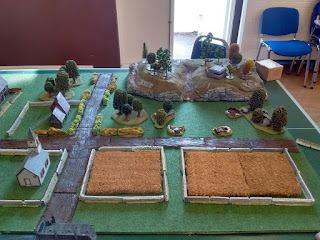 My talented opponent, David, had laid on an absolute visual feast for scenery when I arrived: an 8'x4' board of wonder, complete with a whacking great escarpment in the top-right corner (see above - this is the view of my right flank).
I shan't go through the whole game, but suffice to say that my numerical superiority inevitably won through in the end, helped by a few fun moments in particular, viz:


And that's just about it. We got a bunch of things wrong (sadly, mostly in my favour), but ultimately I think it was only ever going to end with a British victory - even if I'd been defending. I soon realised his only real threats to me were his medium mortar and his Panther, and I had mobility and firepower enough to counter them well enough.
A dual mortar list is fun (those of you who've ever played me in 40K know how much I love mortars) and both of our snipers achieved absolutely nothing all game...so all in all it was fun! Unit of the match? I suppose it'd have to be my heavy mortar: losing an entire 'hidden' squad with the first shot was brutal for poor David!

Thanks for following along, folks,

coming soon, a focus on my Mickey Mouse lorries and an explanation of what the hell's been going on in real life for me...