...And now for something Completely Different. 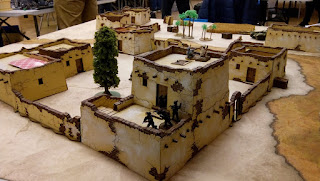 I had the singular pleasure, a fortnight ago, of trying out a ruleset completely alien to me: 'Black Ops', published by Osprey. This is more of a batrep than a review - not least because I didn't actually do more than flick through the rulebook: instead, I was taken through a game by none other than its designer, Guy!

To that end, if you just want my thoughts on the game, feel free to scroll through and just read the text in yellow [or possibly some other colours at the end, as blogger's being weird again...] and the summary at the end.

The Game:
Guy's very used to giving intro games, so once I'd set up my interpretation of a compound somewhere out in Sandy Places, he breezed straight into it. We'd rolled up an extraction mission, and my job was simple: I had to get in and grab a local fellow who'd decided to defect to the Security Forces but was being guarded by the local warlord, who was suspicious of his intent.
It was a short-notice mission, so there was no top-cover, no heavy support, and no chance of waiting 'til dark.

My team comprised the following:
--   My 'Leader' (assault rifle)
--   Two Soldiers (assault rifles)
--   One Specialist (medic; assault rifle)
--   One Heavy (sniper: automated sniper rifle)
...and that's it.
Facing me, I had something in the region of twenty locals armed variously with AKs and a few bolt action rifles. They were led by quite a tough Leader, and had a heavy machine-gun emplaced on one of the buildings in the compound. Ouch.

However, on my side I also had the element of surprise, for the locals weren't expecting me, their Leader was resting, and I could enter the board wherever I liked! One problem: I didn't know which building the Target was being held in. Damn.

At this point I started to work out how the activation works in this game: players draw shuffled playing cards. Leaders activated on Aces, Specialists on Queens, Troops on Jacks, and Heavies on Kings. There are two of each in black and two of each in red, and that's it. This means that each turn each type of unit gets two activations in a random order...so it soon became apparent that card-counting is a useful skill to bring to the table!

I got the first move and I got to 'delay' my specialist; that is, wait to take her action simultaneously with someone else's card...which I did, as the next card was my troops. They snuck in along the south wall of the compound and (much to my joy!) were able to not only sneak in, but also sneak up the compound wall and onto the first floor flat roof! Brilliantly, and much like a role-playing game, the facts that they were trained experts and working as a group of three meant that bonuses stacked for them to manage it. Genius.
The next bit was absolutely fantastic! With the delay of a couple of activations, I got the gang to rush up through the roof hatch and surprise the HMG team with an swift and deadly assault ("CQC") from behind. Wow - so much fun!
"But what," I hear you cry, "Were the locals doing during all this?" - An excellent question. Allow me to address it...

For the locals, their activations are - at least until the alarm is raised - randomly generated. And this is another work of genius: the chart itself is  simply and lovingly done:
As for their Leader? Well, in this scenario, he's only activated once there's enough NOISE to make him think something's afoot. What's NOISE? - In the early, sneaky stages of this game, every time anyone does something which causes noise (running, CQC, shooting, shouting etc.) they accumulate noise counters. The more noise counters there are, the higher the chance of the goodies being spotted or the baddies' Leader being roused to action. Again: the system is genius.

Sadly for Sneaky-Beaky-Team-Alpha, one of the guards thought he saw something and shouted a warning. Luckily, no-one else reacted, but that particular guard did come back to haunt me... Part 2:

I can't remember quite what went wrong at this stage, but this is when it all started to kick off.

That blasted guard somehow rolled luckily and when the baddies roll high enough (or with enough bonus points from noise counters!) this means that their player can take control of them! Well, he did, and Guy did. And he posted him on overwatch looking at the door of the building I was in. Bugger.

This severely limited my options, and in the next round - sadly, I just had to act. So, deep breath, and the two Toms bulled open the door, stepped outside and one of them was immediately slotted. Buggery-bugger. His buddy returned fire and failed to kill shouty-guard, and then my specialist medic leapt to her fallen comrade only to discover there was sod-all she could do for him other than stabilise him and drag him off for a casevac. As she couldn't do this, she just dragged him back into the building. Strewth. 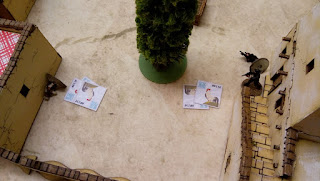 All this shooty-shooty, of course, had created a shed-load of noise, and - inevitably - this woke up the Boss. At this point, all bets are off, all of the noise counters disappear and the baddies all become directly controllable. Drat. 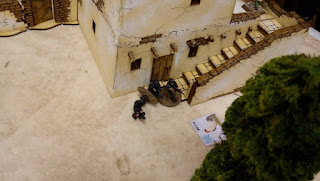 There was a brief exchange of fire across the courtyard, and my medic slotted a fellow popping his head through the side door, but sadly my second soldier also got shot when he tried to close with the shouty guard. Aargh! My medic could, of course, had rushed to his aid, but she did a bit of quick triage from afar, realised that she could neither stabilise him in time nor medevac him in any way...and instead joined the Leader in order to try to get to their target.

Things were not looking good, but at least, with the outpouring of all the baddies in the compound (two of the damned buildings were bloody empty!) my two surviving snatch-team members now knew which building their target was in. The one outside of the compound. Grrr...

But what about the sniper?!

Ah, well, every new turn, the baddies get to roll a d6. For each cumulative six points they get 10pts' worth of reserves arriving from a randomised table edge. Six points is enough for - say - four troops or maybe a leader with two troops...or apparently they can wait 'til they've accumulated twelve points and bring on some heavy support. Guy got lucky and by turn three he had 12 points. So he brought on a T72. That's right: a frickin' T72. And it drove straight on an blatted the crap out of my sniper's hiding place. So much for my heavy support. Git.
Part 3:

Well, with my sniper dead, a T72 rampaging around, the hornets' nest stirred and only two characters still active, I figured it was time to bug-out and grab the Target. Simple! Sheesh.

In good news, my Leader and Medic managed to shoot their way out of the compound, with the Leader slotting the baddies' Leader (he was pretty high on the SF 'Most Wanted' list anyway, right?) and darting out of the side door shortly after the T72 burst through the North side of the compound, crushing one of his own and spraying MG fire at my guys. 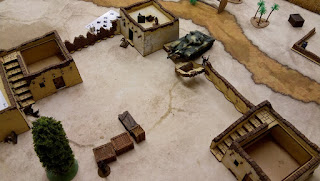 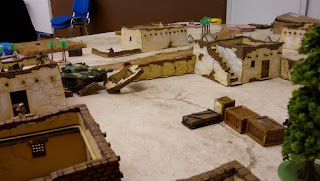 It was a simple sprint race after this point: I had to get to the outlying building and grab my man before either he pegged it off the board or everyone got crushed by the sodding tank. Knowing that Guy had rolled for more reserves and had two more troops and a new Leader entering frustratingly close by, I chose to use my activations to set up some classic fire-and-manoeuvre: the Medic went on overwatch whilst the Leader moved forward and then they swapped. A lovely mechanic!
The new arrivals were eliminated, my guys closed with the Target and then - Aargh! - more reserves arrived just as the medic had managed to shoot the Target's two guards. In the dying stages of the game two more significant things happened: (1) my Leader got wounded and was ignored(!) by the Medic shortly before he was run over by the tank(!!) and (2) my Medic somehow managed to shoot the new new arrivals and finish off the (third) baddie leader in CQC. This meant that somehow - bafflingly - she could run him off the board and usher him straight into the waiting [and presumably T72-proof!] exfil chopper!
A victory...of sorts. A very costly one.

I had snatched the Target with my Medic and killed three local Leaders...but at the cost of two men killed outright, one almost certainly bled-out, and one stashed in a room, stabilised but doubtless about to be taken prisoner. If he's lucky. 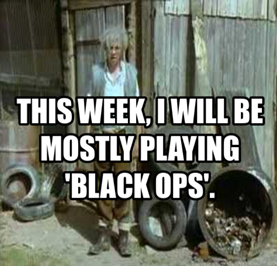 Wow. What a great game that was: we told a great story and had fun doing so - just what I was hoping for!

The gameplay - once I'd wrapped my head around it - was very clever indeed. It was obviously written by a gamer for gamers and the gentle humour seemed well-judged.

The storytelling element really impressed me; not least the elements that felt like a good, solid nod to an RPG game. I absolutely loved the way that the random activations worked, and I loved the nature of the spotting checks and the superb noise counters mechanic too. Case in point: if I'd not assumed that Guy was double-bluffing me with his placement of the Target, I literally could have just snuck in, crept upto the outbuilding, looked through the window, seen he was in there, burst in, snatched him and bugged-out.

Firstly, I thought that the sniper really ought to have been better at hitting things in broad daylight at a 27" range.

Secondly, the T72. I know it was a bit of a giggle, but it just seemed too much, and maybe a bit too unlikely. I can only imagine that a Toyota with a heavy MMG or suchlike would've been more appropriate and more proportionate...and probably more usefully mobile. But then, that's neither here nor there in terms of the rules themselves.

Finally, there seemed to be an absence of quick reference charts at the back. I could be wrong, but if not, it's an easy fix if ever it gets a second edition. 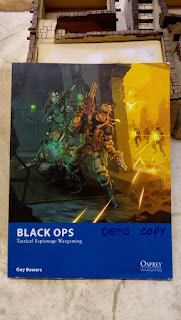 Oh, and do not judge this book by its cover. I should reiterate here that I'm judging the book having not read its contents, but still: the cover of this ruleset undoubtedly cheapens it. The futuristic setting it portrays is absolutely do-able with these rules, as are a whole variety of different scenarios, including other missions, maritime missions, all sorts.

I urge you to get hold of this and give it a go. I had an absolute blast!