This was the second of my two recent Bolt Action games, and I got to trot out my lovely ol' 11th Armoured Division...or more precisely, the boys from 4KSLI! 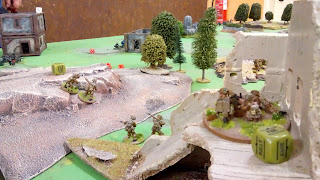 This is because my opponent, Steve, happened to have up his sleeve a 1000pt all-infantry Fallschirmjäger list, so I thought it'd be fun to scrape together my own all-infantry list. ...and it really was 'scraped' together: even with all my available RAF Regiment troops AND a forward air observer, I still had to proxy a couple of runners AND promote my two snipers to 'veteran' (I was aiming for all-regs). Here's my lot: 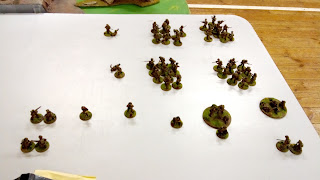 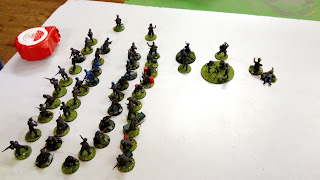 The mission we rolled was 'Demolition', and Steve opted to place his base in the centre of his line, whereas I plonked mine in the corner, and we both deployed upto 4" on: Steve bunched his up across the board from my base - 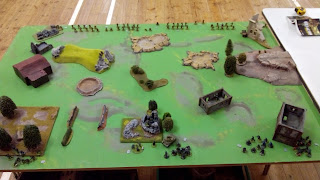 - and I spread mine out - the thin drab line: 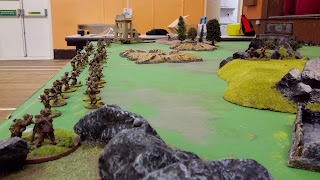 Turn 1 was pretty quiet: a general sprinted advance across a broad front for the Brits whilst the Germans edged forward and the MMG teams from both sides got into commanding positions. The snipers traded ineffectual shots, but my medium mortar got a first-round hit on his central FJ squad. Woo-hoo!

Turn 2 is where it started getting sticky for Steve: my airstrike came in on target, and with no flak to discourage it, the "Jabo" caused an awful lot of squads to take an awful lot of pins!

My mortar repeated its fire mission on the increasingly pinned/decreasingly alive FJ squad, and then my Vickers MMG team - entirely splendidly - managed to wipe out their German counterparts with a well-timed (and apparently very well aimed) clutch of 6s. Elsewhere, the advance continued.

Turn 3 also started with bad news for the Germans: my delayed artillery strike arrived, and basted more holes in the their lines. So far, so good...for the British at least. Somewhere around this point, his central FJ squad was pinned out of the game.

By turn 4, Steve had at last started to stall my advance - mostly by pinning down the two main 'prongs' of my attack - but he had too few units left in the centre to realistically prevent me from reaching him, and my mortar crew getting ANOTHER first-round hit on the squad on my right effectively put paid to his last chance of a counterattack to defend his base.

On my left, Steve's troops finally pulled their fingers out and - despite being shaken from the air and arty strikes - actually started to advance on my base. Sadly for them, the jeep was heavily protected by this point, and I suddenly found myself issuing a bunch of 'AMBUSH' orders for a change.

In the closing stages of the game, there was an absolutely beautiful moment when Steve's officer (on my left) used his order to send the last intact FJ squad over the brow of the hill but failed his own order to join them! In a poignant moment of doomed martial glory, the squad got utterly cut to ribbons, before 2 section charged down and killed their officer.
In the end, when Steve conceded, it was still a draw, but his poor, beleaguered paratroopers had no chance of stopping the Toms: even my 2" mortar was happily ranged in! Amazingly, I hadn't even lost any units!
Steve was, of course, a delight to play against, and playing with an all-infantry force was great: it really does suit the Bolt Action mechanic. I do so wish, though, that you could combine units for a simultaneous assault...

I was both very happy with my tactics (for once) and very lucky with my rolls: especially the off-table support! When airstrikes do actually arrive they really can be brutal!

With thanks again to my opponent Steve,