Here's why: at a moderate level - even in a British high school (way smaller and less equipped than most of their Stateside counterparts) I've access to a huge variety of useful stuff in a way that most people - through work at least - don't. Gym stuff; sports stuff; science stuff; computer stuff; reprographics; maths stuff; books and stationery; A/V equipment; a library and even kitchens...you name it, I've used it. But all pales into insignificance when compared to having the design and technology department (US: "shop") at my disposal.

In addition to borrowing tools and resources, my previous efforts have resulted in my awesome paint station (which I love) and a few templates. But recently, I've decided to start a new project, which I've been designing over the last week and of which I made a mock-up today. Behold: Drax's travelling paint station: 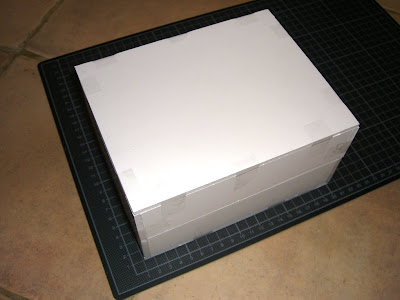 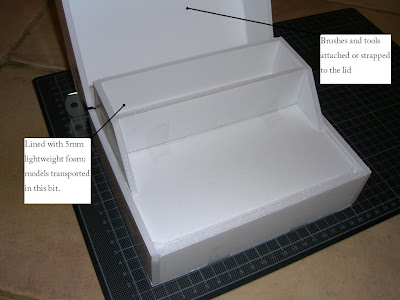 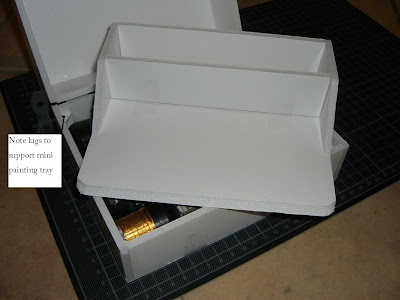 This bad-boy is purpose-built to enable me to while away hours with quality "Drax-time" after Kate's gone to bed when we're travelling. 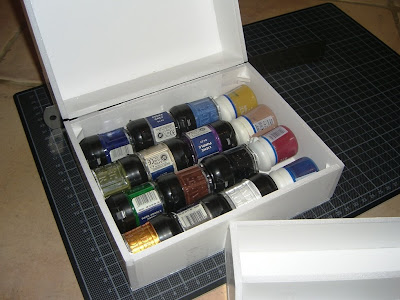 The idea is that the box can carry the following:
- 16 paint pots ("full 16-bit colour," as Kate pointed out!)
- 6-ish paintbrushes, a knife, glue and sundry other tools and bits (inside/attached to the lid)
- 10 infantry models (in the slot at the back, which will be padded with lightweight 5mm foam)
- assorted tissue (+ folded newspaper on top of paints). 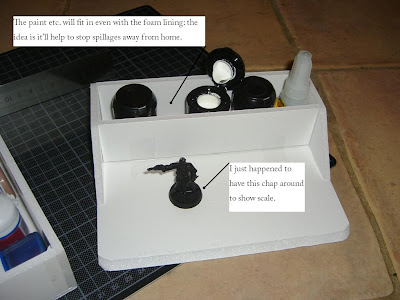 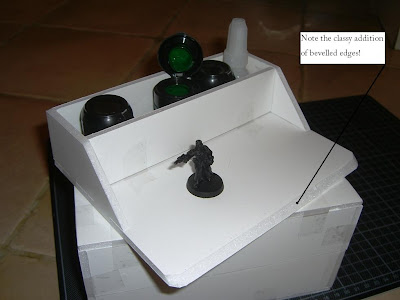 I'll hopefully be making it in the new year at school, using 5mm wood, but this foamboard/PVA/tape mock-up is actually so sturdy that I'll probably take it on my travels with me this Christmas. I've designed it so that it fits nicely into any of my bags too.
What do you think?
C'mon: shower me with praise, damnit!
- Drax
Posted by Admiral Drax at 20:12