Before you lot get too excited over the new 'Codex: IG' rumours, I'm posting about my existing Leman Russes, from the IVth Cadian Armoured Regiment.

In my last post, I introduced you to my original 2nd Edition Leman Russ MBT, Quietus, and here she is with three of her six sister tanks (details below): 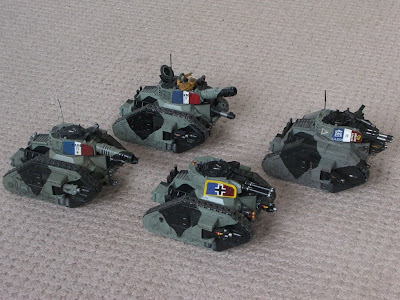 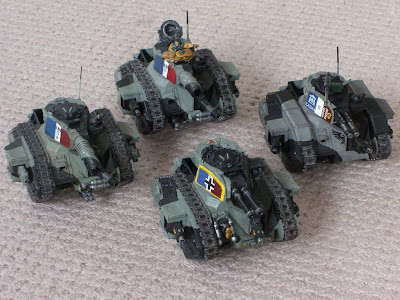 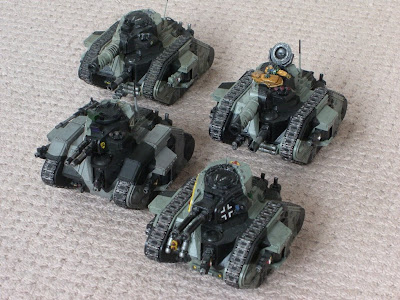 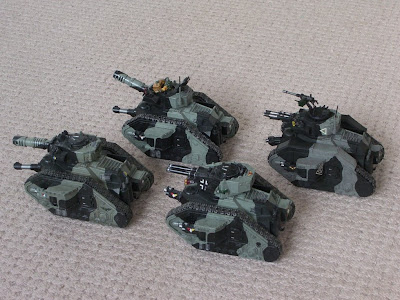 Firstly we have Quietus - an MBT with a history. Note that, like two of the other old ones, she has a chin-mounted heavy flamer. No rules, per se - I just liked the look of this as a no-brainer defensive weapon. More pics of her can be found on the last post: 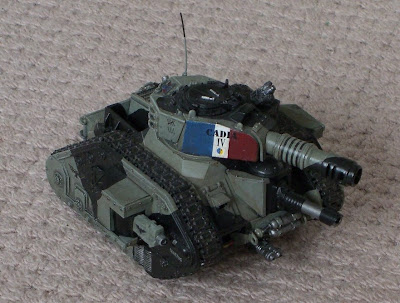 Next, my other MBT, Purple Haze. I'm not very happy with the name, but I'm a little more loose with the naming of my Russes than with my other vehicles - they're all more individual - and the crew (originally GW Exterminator crew) reminded me of the film Apocalypse Now, appropriately enough. Kate painted them, and the other guy's knocking around somewhere or other: 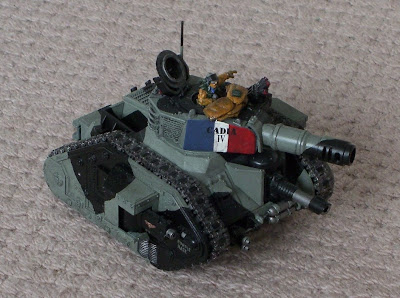 The older of my two Exterminators is named Resurgam, after the beautiful line in Bronte's Jane Eyre. The name is because this one (in its original MBT state) was my brother's counterpart to my original Leman Russ. He's responsible for the original yellow and red details and the lack of driver's window(!), but I have to take responsibility for the bright yellow trim on the turret flash; the iron crosses too. The hull is the model's own; turret from Forge World: 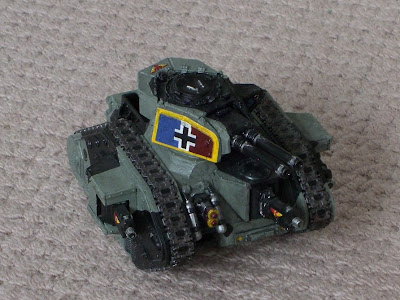 When I rescued and painted this tank she was intended to be a commissar's vehicle (as per FW armoured company rules) - the idea being that the increased BS (4) would be of more benefit with the Exterminator's armament. Besides, I can't really imagine a commissar enjoying the prospect of sharing a turret with a sweaty grunt lugging whopping great battle cannon shells around. She has a P-M heavy stubber too, but I forgot it for the photos.
The last one here is another Exterminator, Sirius. The canine link actually belongs to Resurgam, as when I rescued her from my brother's old junk she had apparently been used as a teething toy by my dad's (then) puppy, Kitty. However, I couldn't let a great name like 'Sirius' go to waste, and as I'd already named my hellhounds I figured it'd be good for this Exterminator which was also designated the command tank (again, after the FW rules) - hence the chevrons (look in the fourth group shot above) and ill-advised clutter on the turret flash. Hey - I'm learning. I quite like the half-aquila on the hull bolter though...: 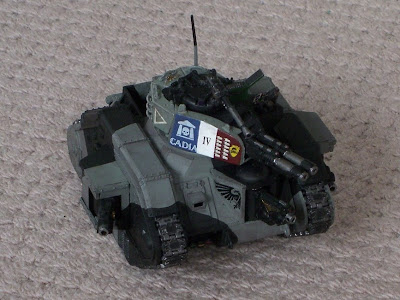 I only finished Sirius yesterday, so that's another 20 painting points - hooray! Sadly, we're trying to sort out a belated honeymoon at the moment, so it looks like my accumulated pounds from painting points will remain...err...theoretical. Bugger.
My next post will be a brief discussion of the camo patterns on my Russes. Exciting, huh? Oh, and if you were wondering, the other two of my current Russes are converted Annihilators. I love those tanks.
Thanks for swinging by,
- Drax.
Posted by Admiral Drax at 17:19