Evening.
This is by way of a short ramble away from today's excellent tutorial post by Fade74 on Bell of Lost Souls.
It's entitled The Average Guardsman and it's a guide to basic assembly, simple conversion and (ultimately) 'average' painting: something I believe is easy to overlook. What follows is my take on it. 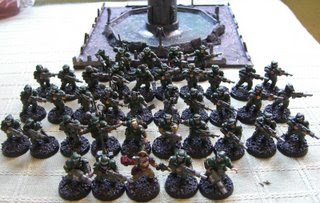 I have a few problems with my army - specifically the sprawling mass of infantry I call B and D Coy of the 1/24th Cadian:
1) I'm not a particularly good painter;
2) I'm not a particularly fast painter. Scratch that: I'm really slow.
3) I don't have (or make) a great deal of time for painting. In a good week I might get an hour -and-a-half in; in an amazing week I'll get in an afternoon at the weekend.
So in the past, I've looked into painting services, just so I could get a game-legal force on the table. I might still be interested in it this year, but here's the problem:
I just require basic, functional painting!
My troops are painted in flat colours. I use none of the following on my miniatures:
-- highlighting
-- shading
-- drybrushing (except on the rubble basing)
-- inks
-- stains
-- washes
-- blended colours
-- mixed colours
-- subtlety!
Why? Because (a) my earlier efforts would look pants by comparison, (b) I don't have ANY eye for colour, (c) I haven't enough skill to make it worthwhile, and (d) I don't have the time. All my paint goes on straight out of the pot, the transfers go on painstakingly slowly, I spray-varnish the miniature for protection, and then I base it.
Yes, I know that the new washes could be ideal for my Cadians. Yes I know that it makes sense to put the rubble on the base early on, but I want them to look uniform, and I'm a stubborn old fool. This is why I enjoyed Fade's post today: it aimed for good, achievable, 'average' effects - and that's what I aim for. I'm not saying my models are bad: I'm saying they're functional.
So why, when I've emailed very nice people to enquire about paying them to do my hobby for me (an odd situation by anyone's standard!), have they always stated something to the effect of, "Our basic standard involves upto three layers, basic highlighting and shading, and we'll even base it for you." I'm touched, but confused.
Is it beneath artists' pride, maybe, to offer such basic functional painting services? Is it a bitter pill to swallow, receiving an email from someone saying, "Please would you tell me the cost of painting ten plastic models badly"? - Because I'd certainly never mean it in an insulting way: I think the work these guys do is amazing!
I often feel like some sort of pariah for choosing not to highlight or mix my colours, and there must be others like me. Are we all ashamed? Is GW's awesome Golden Demon hegemony so overpowering that to use their paints straight out of the pot for anything other than Assault on Black Reach Ultramarines is heretical? I don't know.
But thanks to Fade for keeping it real in his first post. By the quality of the minis in the pictures, I've a feeling his painting will impress me regarless of the techniques he uses, and I look forward to reading it!
Thanks for bearing with me. I've lost my voice - maybe that's why I'm writing so much tonight...
- Drax
PS: In case this hasn't bored you enough, I'll be doing a self-indulgent step-by-step of my painting process soon. Thrilling, huh?
Posted by Admiral Drax at 20:55