I don't often get the chance to take my models on a trip and game with them...but if I did, this is how they'd travel: 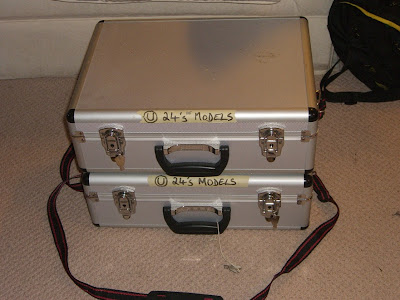 First up, here's the infantry: 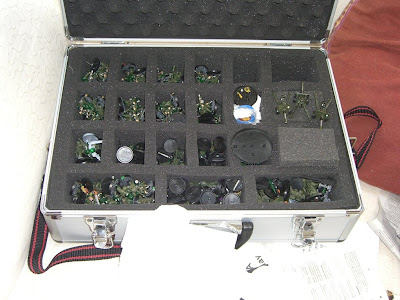 In the first four compartments in each of the top three rows, there is an entire infantry platoon of 40 pax. Each of the compartments along the bottom row contains a heavy weapons platoon of 23 pax - fire support platoons in the left- and right-hand ones, and my mortar platoon in the centre. On the right are a couple of inverted sentinels, two lascannon squads, and two company command squads. There are some snipers in there too - and a regimental mascot! That's all of B Coy and D Coy with their respective command HQs and some support: I make that a total of 220 pax, 2 sentinels and a dog. Luckily there are still a couple of compartments spare...!
And the light vehicles. This one is only two-thirds used so far: 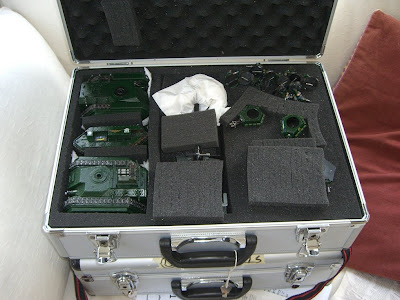 In the photo above, there are four chimerae and a salamander in the left compartment; two hellhounds and a earthshaker cannon in the centre; an AF squad and some bits on the right. I've rearranged it since the pic was taken though: now the centre compartment holds two hellhounds and two griffon mortars. I've never yet had any breakages of note.
These cases cost me twelve quid each - money very well spent as far as I'm concerned. Having a largely varnished and largely plastic army helps too - as does trying not to care too much about my paint jobs. There are vast swathes of my army not to have any transport of yet, but with a carry case each for my detachments of the 1st and 2nd/24th, I think I know what I'll do when it comes to moving the tanks around!
Have a good weekend, everyone,
- Drax.
Posted by Admiral Drax at 20:54