This is a two-fold post about things that are missed.
On the one hand: has anyone clocked just what's notable by its absence from the New IG Codex? 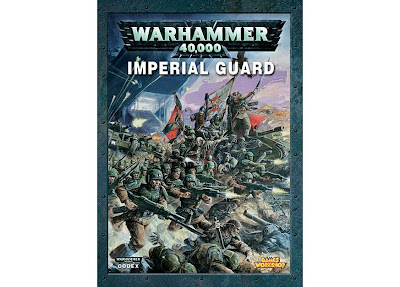 - There are NO pics of GW's awesome Kasrkin models.
Now, I know that we oughtn't to be surprised, and we're anticipating new stormtrooper models, but it's odd that the only glimpses of stormies in the whole book are the old ones in respirators. The models aren't in there, but there are the old stormies in new pics on both pages 46 and 56.
Does this mean GW is planning to re-release the respirator stormtroopers? I thought no-one liked them!
Predictably, there are no pics of the old metal Command Squad (apart from the officer) now there's a new plastic version.
Also, two questions (as the HQ officer choice is now specified as a Coy Cmdr):
(1) Why do Company Commanders now get Regimental Advisors?
and
(2) Why can you buy the Lord Castellan of All Bloody Cadia to command a lowly Company? Doesn't he have better things to do?!
---
On the other hand, I've been finishing off my model guardsman from my Painting By Numbers: Part I post, so expect a Part II this week. This made me realise how long it is since I've done any painting - I posted that Part I up at the end of March! I've been very busy with work recently (GCSE and A-Level coursework folders, for those of you who understand what that means), so I've been working very very late and my desk's been obscured by senseless paperwork. 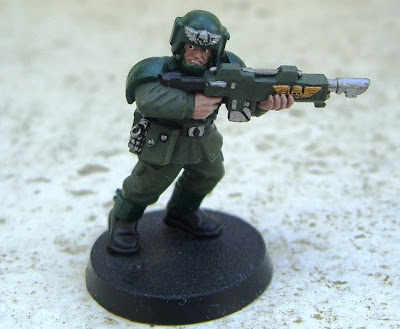