Today - after only a couple of years of very patiently building up my Flame of War force - I finally got in a game!

The very helpful guys at Plymouth Association of Wargamers set me up for a friendly introductory game with a chap called Gary who pitched the game pretty perfectly for my requirements. This isn't a battle report - just a collection of a few pictures and a few musings. And many thanks to Gary.

Here's my lot - most of a rifle company from [old] 11 Armoured Division with attached support; about 1650pts: 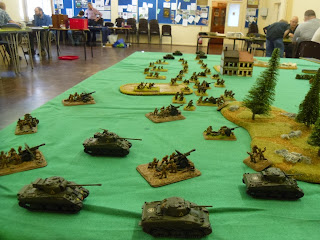 This was my first time putting all my units down at once [I've very very nearly finished basing the wretched 25pdrs: there'll be a post for them later this week] and it gave me great joy to see them all deployed. We didn't play a scenario from the book - instead I just went for an all-out assault to try to push Gary's fearless US Airborne back from the village. 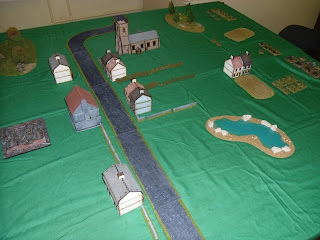 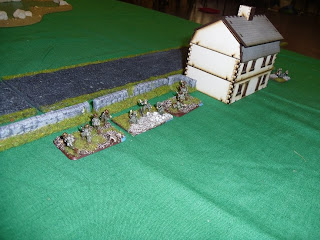 And what a pretty village it was: I ABSOLUTELY LOVE these laser-cut buildings from the excellent 4ground - and they lift off at every floor too! 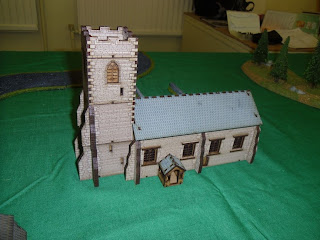 Essentially - inevitably - I lurched into action and started to slowly surge forward toward the village: 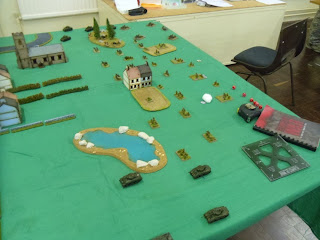 Ever too cautious, I took my time moving up across the very open ground, and Gary almost beat me to the buildings on my side of the village (which would've been dire) but luckily as the game ground slowly on (lots of rule-checking) I just managed to get a toe-hold that looked as if it might just be enough. Time forced us to call it a day at the end of turn 4, but without further reinforcements for the Airborne it was starting to look a little less rosy.

To my utter, utter surprise, my Shermans did quite well! Here you can see them pootling up my left flank, where they were ambushed by four M10 tank destroyers which rolled poorly enough to do no real damage before being utterly cooked-up by the Shermans' return volley: 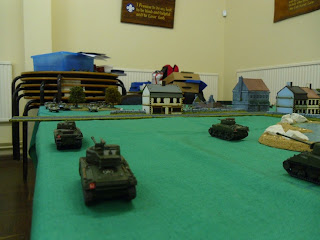 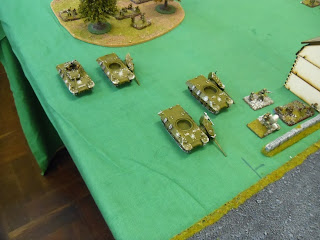 I lost only two vehicles in the four turns, and that was only because I stupidly (hey - it's a learning curve, right?) charged a machine gun platoon in a copse with the Shermans on my right. 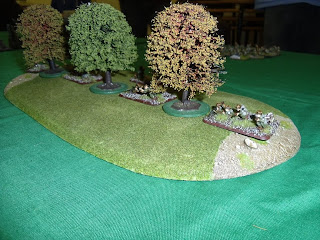 Apparently tanks really are vulnerable in woods. I didn't fully realise that they have to keep taking bloomin' bogging checks...or that they might run away for no real reason. 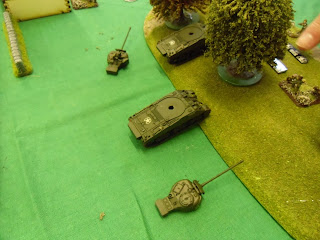 When the two remaining tanks got back in the fight, I then wasted the opportunity to send them trundling through the main road blowing defenceless units to smithereens. Stupido!
You may note that my units are pretty widely spaced. I am petrified of artillery templates: 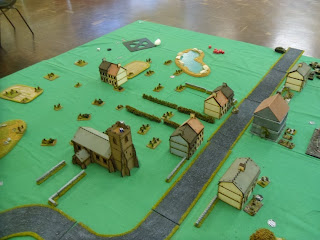 Apparently it works okay though: by the end of turn 4 the only other units I'd lost were two infantry stands and a 4.2" mortar tube.
I was lucky that the dice gods weren't rolling with Gary, but during my final turn I suddenly realised that his soddingly-annoying-and-impossible-to-shift mortar platoon was in fact...firing from within a wood: 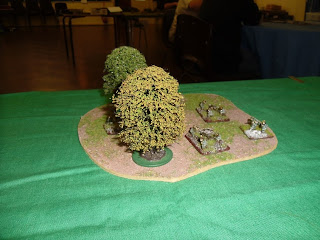 Oh well - we were both rusty with the rules! Far more annoying to me is the fact that I didnt take advantage of the opportunity to smoke the buggers out of usefulness!

Ho-hum.
Overall I had an absolutely great time! There are all sorts of rules I need to check up on now, but essentially, I'm pleased to have got to play a really smashing game against a patient, welcoming and very sporting opponent!
- Drax.
PS: That's one game in 10 months. Jeepers. Time to up the stakes, methinks...
﻿
Posted by Admiral Drax at 22:43