Or at least, at the pace of FW's shipping department...which is slow in a wonderful-yet-everso-slightly-frustratingly-British kind of a way. As in, "We'll probably charge your card before the end of the week, so the bits should be with you within about three weeks." Well, at least they're honest! 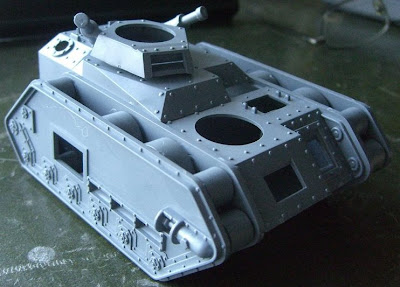 Whilst I wait, I've been fiddling with the MSTTD (see comments, post 048), and I'm pretty happy with it so far. I have taken progress pics, but it's just gone midnight and I can't be bothered to fish them out of the camera, so that'll have to wait 'til this weekend. Luckily, I've worked out a better way of mounting the missile launchers than the dozer rams I used in the earlier mock-up...but you'll have to wait for the pics.

For those of you who were wondering, as FW don't do 'bitz', I've opted for the Imperial Navy rocket launchers as a cool-looking proxy for the FW sentinel rocket launchers. Included below are pics of two of the three FW components I've ordered (photos from FW website): 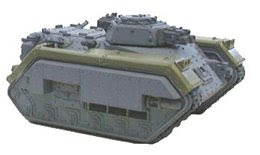 I know the track guards are an extravagance, but they're something different. I also ordered the autocannon turret, as the way I'm building this I'm should be able to choose whether to equip it as the wyvern or as the enclosed salamander (first mooted). I'm keeping my options open, and besides, the turret's an awesome sculpt!

Oh, and good news: I'm fairly sure I've wrked out how to do the front-loading chimera (the next conversion project).
Oh, and great news:
SATs exams in England were cancelled yesterday with immediate effect!
- Without a shadow of a doubt, yesterday was the most optimistic day I've had in five years as a teacher. And simply a brilliant day to be both an English teacher and Head of Year 9! Woo-hoo!
- Drax.
(happy.)
Posted by Admiral Drax at 00:55