Evening, All!
Thanks to all those of you who have commented/encouraged/suggested so far - especially the recent comments from anonymous parties on 052 - I'm flattered: cheers!
Progress has been slow for two reasons: (1) waiting for parts from FW, and (2) having a house guest since last Monday. BUT The parts are here and they're just how I imagined them!
Photos. First, here's a close-up of how I've mounted the missile tubes so far - I've actually used both parts of the spotlight mounting, though I'll tidy that join up soon. Note the turret was not glued down at this point: 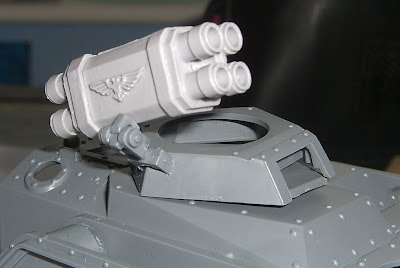 Now. Here are three pics of the turret configuration as it stands at the moment. 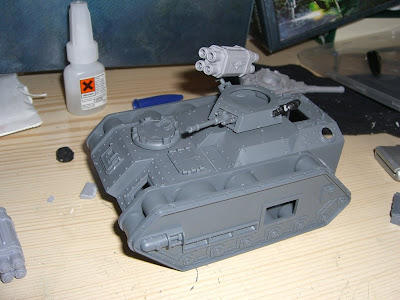 I played about with a number of options to replace the main gun, but I just couldn't get optical arrays looking right. Then I hit upon the idea of a heavy stubber in there - (P-M rules) just as a reserve for when the main ammo's expended - so I went with it. I figured as a defensive weapon it'd look alright. I think it does look quite neat, actually...but it looks too well-armed when it has the missile tubes as well. They must appear as the main weapon: if they look like a bolt-on then I feel the model's concept fails, and the heavy stubber (rubbish though it is) looks a bit too beefy. 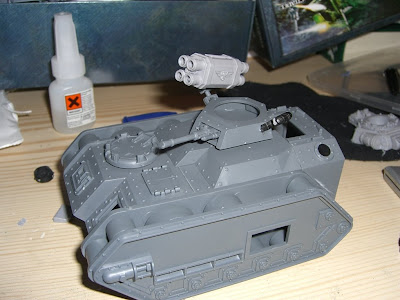 Any thoughts? Please? I've only lightly glued the turret down, so I can make adjustments. I think I probably will, but we'll see. 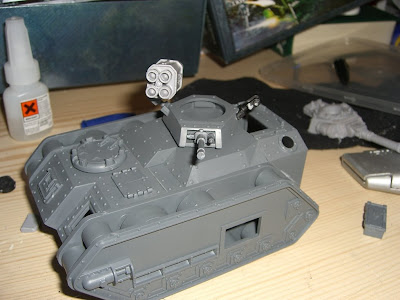 As for the rear lasgun ports? Well, I like your ideas for comms equipment/searchlights, so I'll keep looking at those, but actually the tank accessory storage box you can see on the right in the pic above looks pretty good, so I might even contemlate mixing one or two of those in...

Oh, and for those who were wondering, THIS is what the autocannon turret looks like on the swept-back hull: 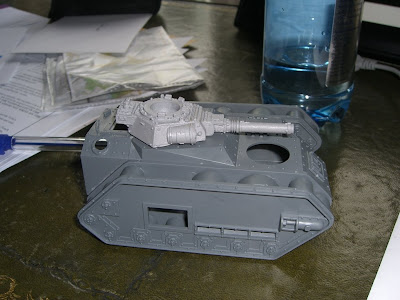 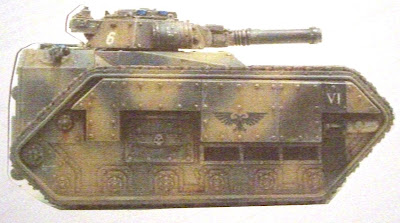 Neat huh? - Almost makes me want to keep that as a reserve 'enclosed salamander' option. Oh, wait - I already fully intend to!