Just thought I'd share somethig I'm happy with. Compared to some of the awesome projects going on in this blogging community it pales into insignificance, but I'm rubbish at getting scenery done, so I was pleased to finish the following storage tank in one afternoon. It's taken from the idea in the Apocalypse book (I think), and since I took this photo I've added a fairly effective rust effect - again, a first for me. Here it is (balanced - for some reason - atop a bedsheet): 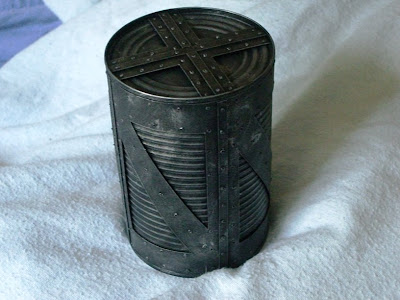 Oh, and those snipers are very nearly done. Watch this space. And Kate'll be home soon, so that'll make Drax happy!

Here's an update, in the wake of Ron's query (see comments):

I might do a step-by-step if I make another storage tank (I probably will), but in the meantime, here is the sketch I made on the back of the cereal packet afterwards, so I could remember the dimensions: 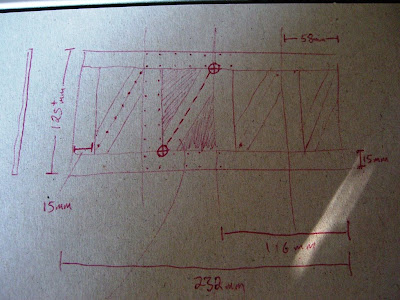 NB: This is a standard British food tin (420g of baked beans, in this case). 420 grams is...some ounces. But please note, if you're on t'other side of the Pond, your tins come in different shapes and sizes to ours.

Also, the annotation from the diagonal cross-beam reads as follows: "rule the diagonal; guess the width of beams" (I did this freehand).

Dimensions: In this example, the main measurements (on appr. 1mm thick cereal packet card) are: 232mm x 125mm. That 125mm width is actually slightly narrower than the label, but it's fiddly to measure 125.5mm! The length divides into four panels of 58mm, and all the uprights and horizontals are 15mm wide, as is the top cross (cut to fit from a broader cross). The extra girders on the uprights give it the appearance of rigidity and were just quickly cut freehand, about 3-4mm wide.

Rivets: These were 'drilled' through with a mini screwdriver (about 2mm flathead with a rotating base, like a pin vise. I don't know what these are technically called, I'm afraid,) and although I didn't measure them, they do follow the patterns marked on the first and second panels in the sketch.