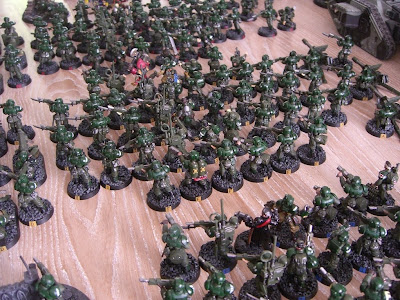 Almost two years ago now I revamped my platoon structure in the wake of the then 'new' codex. I even took some pics of them, here. Well, since then, I've played a surprising amount of games and tweaked it, and realising I really need to update the links to the units in my army on the right, I also figured I could explore their practical application too. I may retake the pics at a later date...

To give you some context, my three platoons operate within a flexible light infantry company (there's an outdated link top-left), which was the product of combinng a 'rifle' company and a heavy weapons (support) company from the old codex. Here are my thoughts...

Each platoon comprises an HQ section (always armed with 3 grenade launchers, a flamer and no wargear), 3 infantry sections, each armed only with a different special weapon (1 sect = plasma gun; 2 sect = melta; 3 sect = grenade launcher), a special weapons squad (SWS), a direct-fire heavy weapons squad (HWS) and a mortar squad. That is it. No-one has any upgrades and there are no voxes (since I fell out of love with them).

In theory, each platoon is a jack-of-all-trades, hence me calling them 'tactical' platoons. Each is able to hold its own for a while, with a varied sprinkling of anti-tank, some effective anti-infantry and even indirect fire support from the mortars. They're not designed for close assault (they're Guardsmen, after all!) but 53 bodies for around 430pts buys you a lot of time in the Alamo.

In practice, I'm constantly amazed by how well they do just that. Even in games where they're gloriously slaughtered they take a respectable amount of time to die, and even then, sheer weight of numbers means that the butcher's bill isn't usually too bad once the dust settles. They sometimes follow orders, they often gun things down and occasionally, they do something cinematically heroic, like the meltagunner of 2 section, 2 platoon, whose kills include a wraithlord, a tank-shocking wave serpent and even (albeit with his section rapid-firing too) a bloodthirster of Khorne.

The basic concept behind my infantry is that they're all expendable. The only infantry units I ever field above 100pts is a lascannon HWS (which is a company-level asset I hardly ever use: giving Guardsmen lascannon is an absolute waste) and any veterans with Harker attached (which I haven't used in ages). All my cheap units do is pootle about, shoot ineffectually at stuff, get lucky, get killed, run away, hold up my opponent and loiter around objectives when asked to do so.

I scarcely ever combine squads. It confuses me and it doesn't suit my style of play.

I've found that spreading them out in the deep field of my lines can put-off deep-strikes, and they can also provide a useful infantry screen for my tanks.


The platoon HQ suads are great: 3 grenades and a flamer make for quite a hard punch, and I often use them for sneaking up on unwary foes or as a counter-attack unit.

The gren/flamer special weapon squads are very similar in use to the platoon HQs, but the melta/melta/demo one is almos always a surprise to the enemy. They look so small and unassuming that they're easily forgotten...until the demo charge blows apart someone's elite choice or tank!


The heavy weapons fire is usually unreliable, but the mortars are bloody brilliant! Even against marines, and they're especially vicious when you're fielding all three squads, making a battery of nine mortars firing from out of sight (and sitting on objectives if I'm lucky)!

I like the fact that my platooons can be put to most tasks (the only thing they don't do well is moving quickly), and I like their cohesiveness, so I always field them as entire platoons. They may sometimes take extra support (for example, an extra SWS or HWS), but I never field them below full strength.

This has led to some interesting tactical issues recently: in my current tourney list I have two platoons, but in the games where I put a platoon into reserve I'll suffer from the dearth of heavy weapons; not least as I know they won't be able to fire when they do eventually amble on.
______________

And that's it, really. It's fun to play with a 'fixed' platoon roster, and so far they've done me proud.

Thanks for making it this far.

Now, if only I could find someone willing to let me field the entire company again...