162 Space Marines are Posers - I Have Proof!

Just look at this double-spread from the 5th Ed rulebook (used without permission): 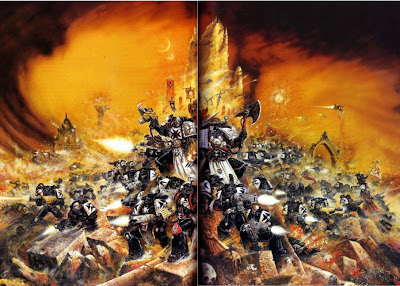 Now, we all know that those oh-so-clever astartes are ambidextrous...but don't you think it's a little too coincidental that all those to the right of the picture are firing right-handed, whilst all those to the left are - well - lefties?

What would the Emperor say if he thought anyone could spoil the aesthetic of an artistic last stand?

The only chap on the left who's dared to use his right hand is only doing so because the left one's been blown off - can you imagine the dreadful faux-pas had he accidently positioned himself to shoot the baddies on the right? He never would have had an open line to the audience!

And what about his mate with the white-ish bolter, to the left of Red-Knee-Pads at the bottom? Surely those hot spent bolt cases are going to eject right into his power-armoured crotch! Being ambidextrous is all very well, but most bolters appear to be made for righties...

...And don't even get me started on the two big lummoxes in the middle - they may as well have jazz hands!

There you go: space marines are posers - you can almost imagine the librarian setting up his tripod.

It brings a whole new meaning to space marine "cheese"!

PS: Thanks to The Inner Geek.