August '09 - NB: Since the new Codex: Imperial Guard, my fire support platoons have been disbanded, and their constituent units re-allocated. In this case, these missile launchers are now part of 1 Tactical Platoon.

This is one of my A/T missile launcher sections (there's one in each of D Coy's two F/Sup [hvy wpn] platoons, along with an autocannon section and a hvy bolter section), and the first one to have been fully based.

I should point out that the three models with missile launchers are amongst the earliest I painted - years ago - so they're rather blotchy and there are *gasp!* obvious mould lines. I think I was also a little heavy on the varnish. 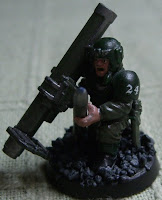 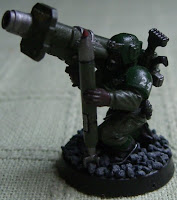 You'll note these have a 'B' on a green flash: D Coy's 1 Pl has the green flash, and the 'B' is because that's their section designation. Out of interest, 'A' is the A/T lascannon squad (on permanent detachment to D Coy HQ); both 'C' and 'D' squads are A/P - with autocannon and hvy bolters respectively.

The rest of the platoon is more than half done, but needs a little more work yet: not least because only today I've started revamping their bases (courtesy of a top-tip from Col Gravis ) in order to make them a little more practical for playing. I'll try to include an account of this anon.A discussion of why I've opted for the Heavy Weapons Platoon doctrine will follow another time, too.